What can you read from Kitchen Utensils? 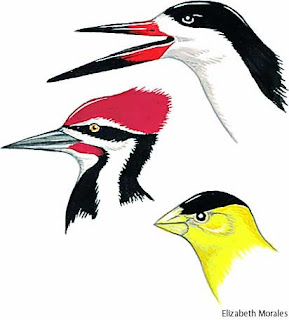 Can you tell what they’d be used for? Would they be used for extracting seeds, for sifting sand, for ambushing? Are they perfect for grasping tiny objects with great precision? Or chiselling and excavating holes – are they as specialised as you’d like, or perhaps they don’t measure up to those you’d prefer to have? Will they do the job or will you perhaps be looking down your nose at the tools to hand?

Animals tell us a lot about themselves – how they can run, their mouth structure suggesting the type of food they might eat, or how we as humans might look through language which has come into common usage.

Such as a man of some importance sitting high up, looking down over his nose at the miscreant below, before passing judgement – no wonder a slang developed for “the beak” to describe the police magistrate or assize judge in the Middle Ages ... it really wouldn’t matter if he had a huge proboscis or not, would it?

The description has stuck and became entrenched through its usage in classical literature and as a cartoon, as here dated 6 December 1881, from the magazine “Punch’s Almanack For 1882”, called “Up Before the Beak” where the “Beak” ,or judge, is a Maribou stork, as shown in this wonderful courtroom scene.

Just looking at the various birds of today and seeing the different types of beaks in use, and the adaption to their habitat really should amaze us at how incredible this planet is. We have hooked cruel looking beaks, adapted to tearing rotten meat, of the birds of prey, raptors and scavengers, or the mainly long straight bills of the hummingbirds, used like straws thrust into the deep-throated tubular flowers to find the life giving nectar.
The Secretarybird is a large, mostly terrestrial raptor, shown here with its open beak.
Or how about a spoon bill, a wading bird with long legs spoon-catching the fish, shellfish, crabs and amphibians as the bill moves from side to side through the water; or even a crossbill, which really does have crossed bills, using the unusual bill as an adaption to assist in the extraction of seeds from conifer cones.

The woodpecker describes itself completely – doesn’t it? They hammer their way into trees, both on alive or rotten wood, or in crevices in bark on the trees, and then use their barbed tongue to excavate the prey, but also as importantly to obtain the tree sap, an important food source for some species.

As with kitchen utensils, beaks through their particular shape and size tell us what species of bird we’re looking at, what and how it eats. Beaks can be used for all kinds of functions to poke, bite, grasp, maim, stab, slash, pierce, tweet (which sort? bird sort – not twitter sort!), call, scoop, filter, ingest and hook onto – have other creatures adapted as much, I don’t think so.
The crossbills are birds in the finch family.

“The Crow and the Pitcher” – Aesop’s fable – uses the crow’s beak to illustrate how ‘little by little does the trick’, as the crow drops pebbles into the pitcher to raise the water so that he can drink thereby saving himself. Or as other tellers of the story suggest the crow’s persistence, or reminding us that “Necessity is the Mother of Invention”.

Another tale from the Classics is this wonderful limerick, “The Pelican”, I came across recently from Owen Meredith (Earl of Lytton: 1831 – 1891). My recent post shows its dip netting beak – a loose membrane that can hold onto the fish, while the pouch is drained before swallowing their catch. Large fish can be caught with the bill tip, tossed into the air to be caught and slid into the gullet head first.

A wonderful bird is the pelican
His bill will hold more than his belican
He can take in his beak
Enough food for a week,
But I’m darned if know how the helican. 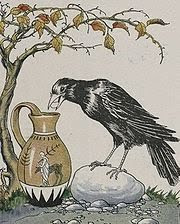 The wonder of language and its uses that have developed into the word beak for that proboscis that most of the fauna of this world has in some format, whereas the human being has included a somewhat derogatory description for perhaps our most obvious accoutrement to the human face “our hooter”, which has been recorded for posterity in our literature and art.
The Crow and the Pitcher, illustrated by Milo Winter in a 1919 Aesop anthology

Dear Mr Postman - since my last story with its happy connotations about great nieces visiting my Uncle, sadly he left us on Wednesday. Today is my mother’s 89th birthday – so life is, as usual, interesting.

I hope and believe that my uncle left us knowing that he would be going home, once he was more comfortable, and I have to comfort myself that that is where he is now with his precious and much loved wife. He was so much loved and respected, and he was so grateful to see his friends and family at his bedside, in his relatively short illness: may he rest in peace now.

I haven’t had much time for anything and things didn’t quite go to plan, which I’m sad about, but he left knowing that I’d always been there for him. However, I have to consider my mother and she cannot, due to her strokes, express her emotions, which makes these sort of situations very difficult.

We remember the happy times and a cousin of my mother’s, who was over from Canada, came down on Tuesday and had a short visit, and we had supper together. So for the moment we continue on and will remember my uncle for the wonderful man he was, and the amazing times he gave my mother and I with his communication skills and knowledge of life – he will be sorely missed, but I cannot dwell on that at the moment.

Dear Hilary.
I am so sorry to hear that your uncle passed away and yes he will rest in peace having had the chance to complete with family and friends and being surrounded by your love.
Hilary, hugs to you, love Wilma

Hi Wilma .. thanks for caring with us. Yes his last days were filled with lots of love, and he knew we loved and valued him. thanks for the hugs and the thoughts -
have a good week ...
Hilary Melton-Butcher
Positive Letters Inspirational Stories

What a nice post. Our languege is very interesting as how it has evolved. Thank you for teaching us so much about it and how it came about.

Sorry to hear about your Uncle, you took good care of him and he knew that you have. Hugs to you and your family. Hope that your week will be good.

Hi Dan and Deanna .. thanks for that comment. My sister in law too said she thought it was a good post - to my surprise .. as I'm struggling with putting ideas to paper at the moment!

Yes - fortunately Derek was really loved and happily remembered now. Thanks for the hugs .. and yes you too have a good week

Great point to link utensils and beaks. It is interesting that all wild birds were equipped with what they really need. Asians use chopsticks for rice. I think same as variation of beaks of birds.

Sorry to learn about your uncle. I hope peace on him and your family.

Hi Shaw - glad you like the link between kitchen utensils and birds' beaks. I suppose the crossbills are 'similar' to chopsticks and their usage for Asian cuisine, rice in particular - thanks for that correlation.

Thank you for your kind words regarding my uncle and the family ..

Your title of this post really got me. :-)
My son Dylan would really love this post, because he is really interested in birds. I guess I can show him the photos for now.
Thanks for sharing.
Giovanna Garcia
Imperfect Action is better than No Action

Hi Gio .. glad you liked the title .. and Dylan - so pleased to hear he's interested in birds .. and yes you could show the pictures, and the other blogs with pictures are there too .. particularly the pelican, and the puffins.

But the lovely limerick should amuse him in a year or two! Thanks for coming over ...
Hilary Melton-Butcher
Positive Letters Inspirational Stories