We are the World Blogfest # 26: Artist’s Sculptures being Sunk to Protect the Sea …

A local fisherman’s dream to bring his stretch of Tuscan waters back to life, where commercial trawlers have been ravaging the seabed …

Bottom trawling involves dragging a large net (which cannot discriminate its catch),  across the sea floor snatching large amounts of bycatch … destroying the habitat (sea meadows), killing the unwanted fish and other marine creatures - all trapped in this method, used by commercial fishermen …

Emily Young, the sculptress, has an interesting pedigree and thus links to artists, writers, conservationists, polar explorers … while her sculptures are completely inspiring …

… there is one exhibited in Siena until 20th July 2019:
Solar Disk III … just delightful …

There’s a very short video of one of her sculptures being lowered onto the sea floor, and then with the regrowth, as well as fish re-population with cuttlefish, sea bream, sea bass, squid, lobsters etc … the restaurants can again offer local seafood, rather than Asian frozen fish …

Paolo Fianciulli, a local fisherman, who started using concrete blocks to thwart the trawlermen, has been targeted by unscrupulous thugs …

… but now a team of sculptors, including Emily, are sinking their works of art to continue protecting this coastline …

Marble from the renowned Carrara (Tuscan) Quarry  has been donated to the sculptors … it is not of the finest white that Michelangelo once worked, yet exhibits the stone’s geological history …

… her other sculptures ask that the viewer broods across deep time, geography and cultures … in other words to think deeply about our world and its life – how it came into being, and how we are a microscopic part in Gaia’s existence …

So here we have artworks that have a higher purpose than being worth thousands of pounds (not dollars!) … 300 donated chunks of Carrara marble ready to be sculpted, lowered overboard, they need barges to take the ten-tonne statues out to their watery resting places …

She maybe dumbfounding her agent, leaving her colleagues aghast, as the artist, who has been called Britain’s greatest living stone sculptor, lets her magnificent works of art disappear into the murky depths to protect a part of the Tuscan seas and coastline against unprincipled humans with no sense of responsibility …

We are the World … In Darkness, Be Light

Her website is so well worth reading, while her sculptures are just staggeringly amazing … please, pretty please look!

About the sculptress Emily Young

Emily Young - see some of her recent sculptures, and about this project ... (as I've described above) please look to see why I was hooked!

The tennis is in an enclave … a few years ago – we could wander in, particularly early in the week – now security is tight (understandable) and the place is full, full of pre-Wimbledon tennis players … singles and doubles …

… but when the tennis is only quarter of a mile away – it’d be good to have the choices … but in general the ‘earth stations/ terrestrial', I guess! that I watch via the licence fee are sufficient … so I’ll whinge but put up with things!

Though we could have had painting by socks …?

This VIP made a mistake of going into the Towner as I was walking down for a few more photos (I don’t usually carry my phone/camera around with me – so quite often need to go back to places to take a photo … not sure of the name for that sort of person?!) …

… anyway back to ‘my man’ with the pink socks! – he had an appointment with the Chair of the Gallery … and though he disappeared inside – a troupe came out to see the painting’s WIP … so I asked, to everyone’s bemusement, if I could take a photo of said feet – socks are good!

David Dimbleby has been the chairman, since the Towner became a Trust in 2013, and is one of our finest television broadcasters, writers and presenters … who has hosted, written and presented various cultural programmes for the BBC … and my pink-socked man re-appeared with the great and the good of the Gallery.  Poor chaps I hope they don’t read this!

On another visit I noticed that a workman had probably accidentally bashed the beautiful work … as there was a white patch … not small, but not large … so I kept returning – thinking I’d see one of the artists making reparations.

I did – it was the director of the London Mural Company … patching it up – he’d finished by the time I arrived – so was able to briefly chat.  His dungarees were well spattered …

I emailed the marketing department of the paint company, who supplied the paint – they are an Eastbourne company, established 1904 – for some information about their sponsorship ... I got no reply:  I’ll be visiting them – I don’t give up!

That’s it for now … pink socks posted, dungarees with the paint spats, while the mural was once again intact … the only challenge now are the many seagulls that live with us.  How they’ll keep it clean in the year ahead – is perhaps another question I’ll ask.

The collections had previously been housed in Manor Gardens …

... and were moved to their new home in this purpose built facility - adjacent to theatreland – a ball-boy’s throw to the seafront, and overlooking Devonshire Park …

I met the Muralist from the London Mural Company, who was painting the design …

… and letting you know some ‘funny’ stories that have come about …

The photos are mine – the professional ones of the Gallery I'll post shortly; we've had reasonable and good weather: interspersed this week with some mega storms - Wednesday we had over 1,000 lightning strikes – it was impressive!  Mind you I slept through most of it!


I now hope the rain has left for Spain … and we have a beautiful three weeks of English lawn tennis … strawberries and cream, sunshine, as well as excellent sport …


That wasn’t … was it … surely he couldn’t know I was home … my stomach sunk … nope – I wasn’t going to answer the bell … but if he knew I was home – how could I avoid having to face him.

I’d been to hell and back to get that restraining order … I’d been intimidated long enough, my child suffered as I did  - we lived in constant fear … but I thought those days were over, seemingly it wasn't to be until the authorities helped us to get new lives … what now …

There he stood … smirking – knowing I’d be in a heap inside … my stomach churning … then he demanded to see his (our) child – who I’d made sure was in the back-room and couldn’t hear … but I had no choice – he said he knew his child was here … how?

This happened time and again during the restraining order … and each time he seemed to know exactly what we’d been doing, what we watched on the tv, how we entertained ourselves … 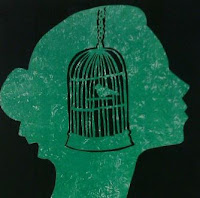 … then I learnt all the horrors that he’d been perpetuating, and through a charity I was able to see how he’d been able to control us, even after the restraining order …

That was a few years ago – though the damage won’t leave me, I am coming to terms with life where my child and I can live in relative peace …

Domestic Violence kept me caged as a bird …

I read an article on the aspects of knowing your tech – hence ‘this story’ … as spying can occur through so many smart devices now-a-days … apps via phones can be linked to door bells, smart products (thermostats, home security cameras, tvs, domestic appliances, toys, that Echo thingie)  etc etc) … these open us all up to unprecedented levels of control and surveillance … be aware … be very aware, be aware for others too …

The moving commemorative events held this week on the 75th anniversary of D-Day … were only the start of the end ...

... it was another 11 months before Victory in Europe could be formally acknowledged, when Nazi Germany unconditionally surrendered its armed forces.

One hundred years ago today my father was born, twenty-five years later he was on shores of France … he fought for Britain, the free world, his life and for others to live … he was awarded the Military Cross …

… like many, my parents, did not talk about their Army experiences, but certainly their lives were affected, then they lived on with their families … until their time came.

I’m sure my family would endorse all elements of the 2019 D-Day Proclamation that ceremonially commits its 16 signatories:

“To work constructively as friends and allies to find common ground” even where their opinions differ and “to work together to resolve international tensions peacefully.”

The Proclamation was signed by:


"Over the last 75 years, our nations have stood up for peace in Europe and globally, for democracy, tolerance and the rule of law.

We re-commit today to those shared values because they support the stability and prosperity of our nations and our people.

We will work together as allies and friends to defend these freedoms whenever they are threatened."

I, on my own behalf, and everyone who reads this blog would encourage us all to be humble, remember what they were willing to give – we have to preserve this brave and courageous generation’s legacy of Peace and Freedom. 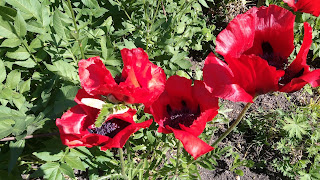 
I'd like to add a note to this post:  One thing I've learnt is - we need to understand history, the different peoples of this world, their culture and customs etc - before we go expecting others to be like us ...