Rhinoceros chase - or how about a little rolling over with Hippopotami? 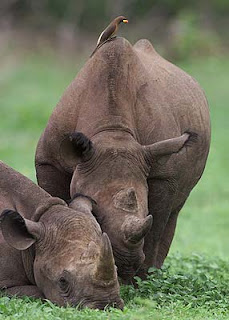 Fancy being chased by a three toed monster – a rhinoceros? This large primitive looking mammal is as old as the hills – it was around over 5 million years ago. The white or square-lipped rhino is one of two species in Africa, its name deriving from the Dutch word “weit”, meaning wide. It is about eleven feet long and will stand five foot high at the shoulder, weighing in at over two tons. Some creature.

When we visited National Parks in southern Africa the warming given is that wild animals can be dangerous .. a slight understatement perhaps? – keep calm, keep your voices down and remain in your vehicle as you travel the dirt roads around the parks, stopping and watching the animals, birds, insects or reptiles as you come across them.

The Hluhluwe and Umfolozi Game Reserves in Natal are the oldest conservation areas in South Africa, coming into existence in 1897. The Kruger Park being established the following year, starting life as a relatively unknown conservation area, before becoming what is now an internationally recognised national park, and one perhaps you have heard of. 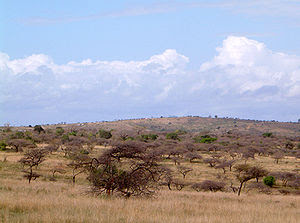 Zululand has always been rhino country and the records of the old hunters are filled with accounts of their adventures with these great beasts. Both white and black rhino flourish here, though the Parks are mainly known for their white rhinoceros conservation programme. The colour description is a misnomer – they are both a rather dirty grey!


The bifurcating river in the Umfolozi Game Reserve converges once again creating a huge tongue of land, 50,000 hectares in extent, which is among the loveliest bush country in Zululand, backed in the north by a high ridge of hills.

This area between the two rivers has always been frequented by wild animals. It is classic savannah country. The grazing is rich, the climate - warm to hot, with ample water – suited to most African mammals. Hunters had been kept away due to the tsetse flies and the rhinos (both black and white) were happily in residence – fortunately saved and conserved for us – the future game viewers.

Rhinos love the grassland and open savannahs where they find water holes, mud wallows and shady trees and tend to be more gregarious than their black counterparts. However they are rather ill-tempered and have been known to charge, without apparent reason – as their eyesight is poor, while their sense of smell and hearing are very good.

When attacking, the rhino lowers its head, snorts, breaks into a gallop reaching speeds of 30 miles an hour, and gores or strikes powerful blows with its horns. Still for all its bulk, the rhino is very agile and can quickly turn in a small space.

We were happily travelling round the Game Reserve keeping to the dirt tracks, some of which had been cut into the surrounding bushveld to give a relatively flat road surface. We’d seen lots of buck, giraffe, rhinos, elephant, zebra, jackal, vultures, cranes and more – just wonderful to be able to stop and admire these creatures.

We were returning to leave the Park by one of the more obscure single track dirt roads, which had been cut down into the savannah lands, we were going up an incline and in the distance the road was ‘blocked’ and wandering towards us was a white rhino. 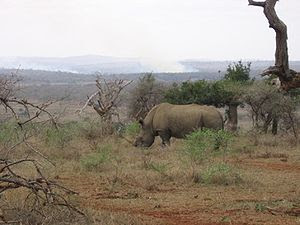 I had to make a decision, I kept going for a little while, thinking that it might amble off – but no and its midriff was at the top of the road - I had not heard of a rhino jumping. So now the dilemma started, there really wasn’t much room to turn round, but I decided I had to – as I could go more quickly going forwards than I could reversing and there was time, as long as I didn’t get stuck.

A rhinoceros in the Umfolozi nature reserve

A three point turn became a ten point turn .. we made it and I was very grateful to be able to drive away. It didn’t seem concerned – but the thought of two tons of solidity with a horn colliding with me at 30 mph – made me not tempt fate!

This horn might only be compacted keratinous fibres, similar to hair, which is attached to skin rather than the skull. Rhinos are often seen with oxpeckers, called tick birds, eating away at any ticks they find, while warning the rhino of any danger.

I did find the fact that a saddle had been attached to a rhinoceros about 2,100 years ago in China very interesting, and wonder why and how. Is it true or is it symbolic? This little world of ours always ends up being smaller than we think ..

A bronze rhinoceros figure with silver inlay, from the Western Han (202 BC – 9 AD) period of China, sporting a saddle on its back

But how about a little rolling over with hippos? I watched this tumultous turmoiled tussle in a drying river, within a drought stricken Rift Valley in the middle of Africa. Hippopotamii 13 foot long and also up to five feet tall, weighing slightly less than the rhino at just under two tons, need enough deep water to cover them.

When there’s a drought they huddle into the deepest pools all squashed together like great beached whales – and all is well until someone tumbles into the aggressive bull, and all hell lets loose .. the massive bodies jostle and heave against each other in a wave until the end of the line is reached and the last one rolls over – bish bash, squish squash, heaving body mass desperate to get into the water again. The perils of nature.

This post was requested by Davina of Shades of Crimson - as she had just written about being chased by a bear, when she was out as a youngster with her family on a horse trek .. it's a good read ... please go on over ....

Dear Mr Postman – thank you for delivering this. You must be getting sick of this cold weather – it is a bit much - roll on Spring! My mother is slowly improving and we just wait for her to get better as much as possible, and for her hearing to come back.

"This little world of ours always ends up being smaller than we think" I find that regularly to be true too! And blogging brings us all the much closer together.

How lovely you had the experience of seeing wild African animals up close, and maybe almost a little too personal with that white rhino.

Hi Jannie .. always a pleasure to see you! & yes - we are always smaller than we think. The blogging world seems to open up the world, while at the same time thinking we're still around where we are allowing us to grow and learn more.

Yes - I was truly lucky to have seen other parts of the world - wish I done more .. but the future beckons!!

The elephant was a closer enounter ..

Have a good weekend with Jim .. cheers H xoxoxoxoxo

Rhinos are so very interesting. I am a confessed PBS nerd and love watching shows on any living creature.

I haven't seen a rhino in the wild though. I guess I will live through your experiences. Great post.

Hi Teresa .. thanks .. isn't it terrible - I don't know what PBS means! Perhaps someone else who comments will enlighten me?!

I love the films too - but to get up close and personal is pretty special and sometimes daunting. Just sitting in the bush (in a camp) and seeing what's around ... is just the most wonderful thing - peaceful, all the insects squiggling or flying around, the birds in the scrub and trees.. beautiful experience - I'm very lucky. Thanks - lovely to see you here .. Hilary

great post,
full of love and passion for lfe

Hi Ji .. yes I do love the outdoors and safariing .. it's so good for the soul, just to be out in the bush with nature and life as it's meant to be. Thanks for being here - Hilary

Hilary -- I thoroughly enjoyed reading your adventure while sitting in my nice, safe office, watching my teeny, cute wild finches eating at their bird feeder. It's not quite the same as roaming through the Umfolozi Game Reserve, is it:~)

I loved that the white rhinos were actually gray. I guess there aren't too many people willing to give them a bath, right?

Hi Sara .. thanks for that and glad you enjoyed it. Your office must be lovely watching your birds - and being able to see the great outdoors. Granted not the same of as a Game Reserve - you are right!

Nope - getting that mud off after a mud wallow would be pretty difficult I think .. let alone finding a bath big enough to hold one! How much soap would one use .. and would they allow you to rinse it off?!

Hi Hilary.
Yeah, I don't blame you for not wanting to tempt fate. It's funny though, to me they seem like big, harmless cows. But we both know better right? That was an interesting point about the tick birds; not that they eat the ticks but that they can warn the rhinos of any danger. I hadn't considered that. Thanks for the reference to my post. :)

Hi Davina .. yes I think I was right to move - even in gentleness he or she may have just walked straight over us (mind you if they did that, they could escape out of the 'donga' (ditch) road). And yes - we definitely know better ..

The symbiotic relationships that birds, insects, animals have with each other - are an interesting adaption of nature.

Shades of Crimson .. is such fun and so interesting to read .. and I loved your island stories .. enjoy today - it's warm there in Vancouver (the Olympic world knows) .. Hilary

Something about rhinos brings thoughts of exotic safaris and travel across the vast African plains to mind. The German pairs team recently skated their long program to the Out Of Africa theme at the Olympics. Very passionate music. For anyone familiar with the film, this triggers images of Meryl Streep in a very beautiful setting.

Hi Liara .. - me too .. and I did watch the skating and dreamt of being back in Africa! I often have the CD on - I just love it .. so it was an added pleasure to see the Germans dance to it - and so well, so expresively .. I could see the African plains. Thank you --