W is for Worcester Sauce ... 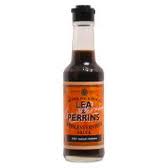 Worcestershire Sauce came into existence at the beginning of the reign of Queen Victoria (1837), when a barrel of vinegar and spices made up for a customer to an Indian recipe was left forgotten for some years in a chemist’s cellar in Worcester.

The shop’s name was Lea & Perrins.

During a subsequent ‘spring-cleaning’ it was about to be thrown out – when prudence suggested it should first be tasted.  Thus was born what is probably the world’s best known and most ubiquitous bottled sauce, one which has become a standard in the British kitchen cupboard.

It is used in many dishes ranging from soups and sauces to salad dressings, and small quantities are a ‘chef’s secret’ in many recipes.

I used it yesterday in some salad dressing I made up ...

That is W for Worcester Sauce – part of the ABC series on Aspects of British Cookery.

I hadn't realised they seem to have found the original recipe .. see The Mail On-Line's article from 2009 here ...

My wife swears by it, but I am an HP man.

No!! It was a forgotten mixture! That sounds unbelievable. It's not vegetarian though as it has anchovies in it, apparently!

I love it! Wonderful stuff, I might sprinkle some on my mashed potato for dinner tonight.
cheers
Sue

We always have a bottle on hand to add to our salad dressing. It makes all the difference.

Worcester Sauce= you want it it's in there.

Ah yes, a good splash of "dead horse" makes just about anything taste better. It's especially good in spag bol.

Ahhh...now it all comes together. I have a bottle of Lea and Perrin's on my fridge shelf right now!

I use Lea and Perrin's all the time. One of my friends corrected my pronunciation of it. I was sounding out Wor-ster-shire sauce and she said it's pronounced "Wuster" in the UK and that not many Americans know that. I always wondered if that was true.

I love worcester sauce but haven't had a drop in over 20 years!! It's the fish ingredient but it's a lovely sauce from what I remember!! Take care
x

Worcester sauce goes with almost everything. I miss it here in NL!

Funny to think it was invented by accident! Where would we be without it?

I use this sauce a lot because my husband likes it. I'm not a fan of the smell but it adds so much to meat and hamburgers.

When I was younger I didn't like Worcestershire Sauce at all but now I love it!!

Yes, for all North Americans, it is definitely Wuster Sauce, or Wustersheer if you want the whole word. I love Worcester sauce but didn't know it was an accidental discovery. I wonder how many things we eat were accidents. Someone mentioned having it in their fridge, not necessary, never put mine in the fridge. I'm sure Hilary will agree.

JO ON FOOD, MY TRAVELS AND A SCENT OF CHOCOLATE

My wife and I love Lea&Perrins and have missed it this week while in Honduras. They flavor they food somewhat differently! I will be catching up on all your posts when I get home. Thanks, Hilary!

I "accidentally" create new recipes all the time.

I love Worchester sauce. I always put it in my meatloaf.

I do enjoy Worcestire sauce. Liked hearing how it started.
Karen

Oh, yum! I love it sprinkled on cheese and toast. Now I'm starving!

I love this! I dump some in my swedish meatball recipe. So darn tasty =).

As far as I'm concerned, a pantry isn't a pantry without Worcester Sauce!

Interesting history of Worcester Sauce. It reminds me of how the Procter and Gamble flag brand of soap - Ivory - came into being. A worker fell asleep, was reading a book, writing a letter, or somehow lost track of the time when he was mixing the soap in a big tank. The soap ended up with extra air beat into it and they found out that it floated. It was a huge success.

Love knowing where this ubiquitous sauce came from! We always have it, use it liberally. Buy it in bulk...never run out!

And all this time I thought it stood for Worcester, Massachusetts, my second home town....

I haven't cooked with it in years. I remember the sauce always being in our refrigerator for dips and such when I was growing up.

Hmm, I haven't tried this one in a while. HP Sauce is my favourite!

And to think we almost lost that one forever. We have several dishes that call for the sauce.

Oh, I love Lea & Perrins sauce, we always had a bottle of this at home as well. Love it on everything. :)

@ Bob – I have both .. but I use Worcester sauce more often.

@ Ros – yes!! I know amazing to think the sauce would have never made the light of day .. No it has anchovies in it ... presumably as Garum the Roman Fish Paste ... had become a staple of the British kitchen over the centuries ...

@ Sue – it is wonderful isn’t it ... and a sprinkling on mashed potato sounds a great idea.

@ Kellie – good to see you. Is that what you call Worcester Sauce “dead horse” .. fun name. It is good in spaghetti bolognaise ..

@ Elizabeth – now you’ll know every time you take the sauce out of your fridge.

@ Old Kitty – sorry about that fish sauce .. blame the Romans ... I admire your commitment to complete Vegetarianism ....

@ Val – I’m sure you can find a bottle in the Netherlands .. it is sold everywhere!!

@ Nick – one of those strange but true stories ... and as you say I couldn’t do without it

@ Clarissa – you’ve found the trick .. the smell tickles the back of the throat .. but the taste adds so much ..

@ Jo – Probably quite a lot of experiments have turned into our standard foods .. and the pronunciation challenge of our English language is bad enough for the English!! If you live in a hot climate as Elizabeth does .. it makes sense to keep it in the fridge ... we did in South Africa ...

@ Chuck – well that comes of having a holiday and leaving us to continue the A-Z ... so, frankly, I don’t have much sympathy!! But I’d do a holiday over Worcester Sauce if there was a choice!! Thanks so much for saying you’ll be back to read up ... appreciate that!!

@ Teresa – ah ah .. you must let us into the secrets of your cellar full of ‘accidental recipes’ .. ?! I love meatloaf – it’s not everyone’s favourite .. but I have a very soft spot for meat loaf, and with that extra sprinkling of WS .. will just add the extra sparkle to the flavour.

@ Karen – thanks .. it had interesting beginnings didn’t it ..

@ Talli – I wonder how long before Lobster Baby gives WS a try .. I expect it’ll be marmite soldiers first!!

@ Christine – I didn’t know that about the Ivory brand of soap .. that is a fascinating addition to this post – thanks for that ... a fun find – and a good story!!

@ Richard – ah well, now I’ve managed to right the fact .. sorry about that!

@ Julie – you must be one of few households without a bottle in the larder!! It is good in dips isn’t it ...

@ Deniz – there are other varieties, but this was our family standard .. and I have HP too – though don’t use that very often.

@ Alex – it is strange to think it might never have been found isn’t it .. and like many of us I guess – it is used for many things ...

Cheers everyone – thanks for your lovely comments ... Hilary

We still call it "what's this here sauce" I use it mostly in the drink bloody mary.

Lea and Perrins is the only brand worth having. It makes a great Blood Mary, but I mostly use it in my meat dishes.

You are so right, I have tried other brands when that was all that was availble but they just weren't the same usually much sweeter.

JO ON FOOD, MY TRAVELS AND A SCENT OF CHOCOLATE

It is definitely a useful addition to the kitchen cupboards, though we have run out at the moment!

This reminds me of a skit from the "Jack Benny Show" where a guy named Rochester keeps saying to him in regards to "Worcester Sauce", "What's this here sauce? And thus, in the skit, that's how it got its name.

I can't cook meat without Worcestershire sauce, but I'm not real picky about the brand. Do prefer the low sodium varieties when I can find them though.

I learned something today! It's almost a miracle sauce.

My husband like to use Worcester Shire sauce but lately he has switched to Soy sauce.

My husband like to use Worcester Shire sauce but lately he has switched to Soy sauce.

Another tidbit I didn't know. I love your researching ability. I love Worcester Shire Sauce but haven't tried it in salad dressing, cheese toast or avocado. That will soon change. I've always used it on meatloaf.

Okay, this is one of my favorites. I even read the article about the original recipe...I like the code words "Bulldog."

It's amazing how things are discovered. Just think what would have happened if they hadn't tasted it. OMG so many people would have missed a favorite sauce:~)

@ Ida - that's a great name for Worcester Sauce .. I love it! I also enjoy Bloody Mary's occasionally .. and I agree an essential ingredient.

@ Theresa - delighted you agree with me re the brand .. and I hardly ever have a bloody Mary now but use it always in my vinaigrette and with meats if I think about it!

@ Amanda - you have a lot going on .. so I'm not surprised Worcester Sauce has been forgotten about .. it will return to the cupboard in its own time!

@ Gary - well that's a good take on the name .. maybe that's why Richard Hughes above thought the sauce originated in the States! It's a skit I haven't seen ..

@ Patricia - you've adapted to your own family and your needs - that makes sense ..

@ Lisa - I hope you approve of my suggestions ... but you use it and it does just add that little something doesn't it ..

@ Sara - I'd forgotten the code word of 'Bulldog' aspect - so am glad you were able to read how the recipe was found finally.

I know we'd not have had Worcester Sauce, nor Tabasco either .. thank goodness for brave entrepreneurial tasters!

Wonderful comments everyone - thanks so much .. cheers Hilary

I love how the greatest things got "accidently" discovered or made. Must go learn more about Lea & Perrins.

Hi Su-sieee - to think of trying to taste the contents - but they were chemists and knew the ingredients, so why not .. and look what we have today ..

I think that's about all for Lea and Perrins .. I think I got the story slightly wrong, but essentially right! Good luck with your researching ..