After Vancouver ... came this book: 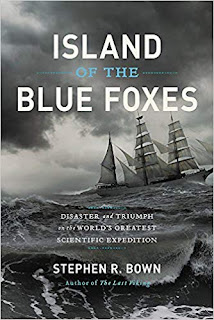 ... I found it fascinating and informative, especially about Siberia, the eastern side of Russia, down into China and Asia: particularly geographically and settlement-wise ... and the Europeans' early search for the Northwest passage and Alaska ... 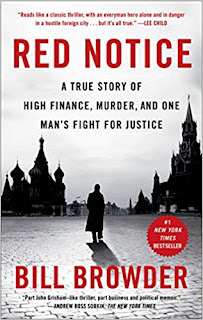 The next book I read, having had access to one of the book club's books, was Red Notice: A True Story of High Finance, Murder, and One Man's Fight for Justice by Bill Browder;

Browder's Russian tax accountant, Sergei Magnitsky, was beaten to death in prison ... the Magnitsky Act, promoted by Browder, was passed into USA law in December 2012.

I found Red Notice a really informative read - disconcerting to say the least ... but I'd worked in this sort of life in my early days in London and Robert Maxwell features in the book - another fleeting personal connection ... his home was next to my school in Oxford. 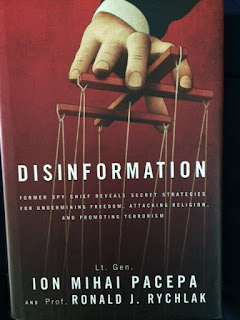 Then I was able to read Disinformation: Former Spy Chief Reveals Secret Strategies for Undermining Freedom, Attacking Religion, and Promoting Terrorism ... how salutary: of the world we live in today ... (by a former three-star general in the Secret Police of Communist Romania, Ion Mihai Pacepa, and law professor Ronald J. Rychlak).  There's a companion film: Disinformation: The Secret Strategy to Destroy the West (which I haven't seen).

Upcoming in the fifth post ... Circling the Midnight Sun: Culture and Change in the Invisible Arctic by Canadian James Raffan.  This I was given by the lady who'd introduced me to the book club - she'd studied nursing at the John Radcliffe Hospital in Headington, Oxford - where I'd been at school ... we'd just about overlapped.

Small world - she'd been up in the Yukon ... so I asked if she could bring me some information back - sadly my email to her was sent as she was on her way back ... but she lent me Raffan's book, and to change the subject,  inspired me to write the post about Salmon in the Yukon from some information she had given me.

The fifth post will be about the book 'Circling the Midnight Sun' - but otherwise here I have mentioned:

Island of the Blue Foxes by Stephen Bown

Posted by Hilary Melton-Butcher at 16:12

I'll get my email sorted out so I don't need to do this any more ... thanks for all the guides and 'how tos' ... cheers Hilary

some serious but interesting reading. Your brain is getting full. I'm trashing out this summer...can't think in the TX sun.

If you find out how to "sort" your email to resume getting Blogger notifications, please let me know. As far as I can tell, the issue is with Blogger and not with any of our email accounts.

As for your "light reading", it seems to me that systematic and organized disinformation is currently the biggest threat to the world. Worrying, because that was pretty much the theme of my 2015 novel, and things did not go well for the world then ...

Hari OM
Hilary, these are three books which have appeal for me, particularly the first, so am going to be doing some bookmarking!!! YAM xx

Island of the Blue Foxes does sound fascinating. Thanks for sharing your snippet reviews. :)

Hooray for books. Repositories of learning, of wisdom, of comfort and fun.
And thank you (and drat you) for making me long to add MORE to my already towering unread piles.

Hi Hilary!
Love books and I did not know this ones... I will check them for sure.
Thank for sharing!

Thanks for your visit on my blog and nice comment as always!

Hilary, I admire how you are always learning and growing. You would have missed out on a lot if you hadn't gone to Canada.

Goodness, you’ve been a busy reader! These books sound fascinating.

@ Ian - I've emailed you re the receiving comments aspect so that's sorted for now.

I was interested in these two books ... gave me a lot of background info - which opened my eyes to a few things. But I didn't know about your 2015 novel - I'll need to check in with you re that ... but 'this 'fake' news' aspect is really worrying and everyone uses it now ...

@ EC - yes I know you love your books ... but I really wanted to put this series out, and if I keep reading similarly I'll add a few more posts as the months go by ...

@ Inger - thanks ... I've been lucky since I've been here - with the people I've met, the educational experiences I've had ... updates on the way ... can't seem to escape them!

@ Sue - thanks ... sorry commenting crossed ... I've enjoyed them and now need to do some more reading ... settling in - cheers Hilary

Hi Hilary, I wish I had more time to read but I do in chinks and spurts a few minutes here and a few minutes there. At then end of the week it adds up to a few chapters.

Lots of good information out there.

No light summer reading for you, however, they do sound very interesting.

Some very interesting reading there Hilary. I am very surprised he was allowed to publish Disinformation. Knowing the things that happened in KGB days.

That sounds like a lot of interesting reading. I feel like I don't know anything about the part of Russia that is geographically closest to us.

Wow - some pretty serious reading here, Hilary! The books and pamphlets on my 'to read next' pile are already half-way up the wall!

What a list of books. I had to research Red Notices for one of my thrillers. Serious stuff! That got my attention but really, the entire list looks intriguing.

@ Stephen - oh I know ... and the short reads aren't possible for taking information in ... so I'm glad I'm settling in a bit to read.

@ Liz - these are fascinating books to read ...

@ Jo - the books are well worth reading ... answering your thoughts here ...

@ Susan - I've enjoyed the learning process here ... so much history and geography - but usefully presented in these books ...

@ Mike - these were so interesting ... I glanced through some of it ... but it gave me a really educated overview ... especially the Island of the Blue Foxes ... for that early history and geography ...

That's some serious reading Hilary. I read Red Notice and was glued to every page. I'm on a reading rampage now with political books. Thanks for sharing what you've been reading. :)

Some interesting books, I don't have a lot of time to read but I do enjoy reading many different types of books

You are always busy in reading many books. Beautiful collection of books!

They sound interesting and serious... I've been reading a lot of non-fiction lately.

Enjoy your summer, and your reading!

@ Debby - you did a review of Red Notice I think ... which when I knew I was reading the book went and had a look at. I'll do some politics ... but for now I'm happier with the older stuff! Hope you can read these though ...

@ Weekend-Windup - I try and read 'good books' but am making an effort to read more now ... thank you, though.

@ Nila - sometimes one just wants to relax with a book ... these I did have to settle to read ... then got hooked with them. You too enjoy your light relief ... and so will I with my choices!

I have been away for a week and suddenly I feel like I am two weeks behind in everything! Some interesting books here, I must look them up. Take care Diane

Hi Diane - thanks ... I've been so lucky with the introduction to the book club - and enjoy the interaction. I felt impelled to get these books up onto the blog ... for anyone interested and for me ... so it's good to know you'll be checking them out - cheers Hilary