We've just been looking at the French Revolution – guided by an excellent ex-history teacher – and I offered to give a talk about 'Napoleon and his Contested Legacy' … only clever because I'm plagiarising it from an article I came across!

The French Revolution is a complicated period in history … and we've had some very good talks – I'm always learning.

My eclectic brain came to the fore again regarding a post – not for our history group – but for anyone who is kind enough to visit the blog. 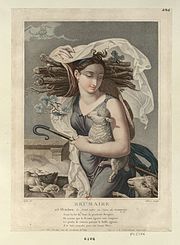 The Coup of 18 Brumaire brought General Napoleon Bonaparte to power, and in the view of most historians ended the French Revolution.

It is an interesting calendar – useless to us, who all use the Gregorian one - but I was drawn in when I saw each of the 30 days – don't ask about the extra days … see the link.

Just fun to look at and think about …

The foggy month of Brumaire will live on in history as the time Napoleon came to power as the First Consul of France, when it is thought the French Revolution ended (1789 – November 1799).

Posted by Hilary Melton-Butcher at 15:11

That was fascinating! I'd never heard anything about the Brumaire. I loved how they decided each day would be named--very French. Great bit of history, Hilar. Thanks for the lesson this morning.

Thank you so much for bringing to my attention something I knew less than nothing about.
I love the idea of naming each day, and recognising the importance of agricultural plants.

Hari OM
ooh, flashbacks to history lessons at school - I had entirely forgotten about the FRC. Someone had put a lot of thought into it - maybe. So very typically French, in its way, though!!! YAM xx

I'd never heard of that calendar. It was clever, that's for sure.

Good on you for considering Napoleon and his Contested Legacy. There is hardly a significant person throughout history whose legacy shouldn't be seriously contested, yet historians seem reluctant to do it. At least for their own landsmen.

What are those extra days called... intercalary days? I was fascinated by the concept when I read a book on the calendar and how various calendars were created. The calendar is a complicated and wonderous thing.

@ Lee – I was so surprised to learn about it … and wanted to remember it – hence the post! So pleased it resonated as of interest.

@ EC – well me too – it's these odds and ends that are memorable in the end. The whole calendar is such fun to look at, as well as the art work associated with it. I need to spend more time reading through the whole year …

@ Yam – I know the period of the French Revolution … but absolutely very little else – a few years ago in another group we looked at the British period, as well as the Revolution … comparing them - but it's challenging for a non-history buff to absorb.

Yes – you're so right about the amount of thought put into the calendar – but they did need to think beyond their particular time frame – so it was never going to take off … however, perhaps it influenced the start of the Farmer's Almanac in the States.

@ Hels – I always enjoy the history lessons and try to be involved – one always learns. However I really need to study it further … even so I gain in knowledge …

@ Liz – they are called 'Complementary days' – and are listed in the link I've given on the French Republican Calendar … the five days, (or six in a leap year): Celebration of Virtue, Talent, Labour, Convictions, Honours (Awards) and the sixth: Revolution. The dates are 17th or 23rd September … see the website.

As you say the calendar is a complicated and wondrous thing – it's a delight to consider ...that is for sure.

what a great post! I didn't know much except Brumaire being a month. The Revolutionary calendar is a rich source for quiz questions at present :)

Absolutely fascinating, I had no idea. As they say, you learn something every day!

Brumaire is new to me, Hilary, as is the concept of naming the days on a calendar. It would make for great conversation wouldn't it? "See you on Celery Tuesday then." "No, I can't make that, how about Carrot Friday?" Naturally there would have to be birds in there too Goose Wednesday and Swallow Thursday seem wonderful. With three hundred and sixty five days in the year there is so much scope. Mammals might have a place too. "Dinner at our place on Aardvark Monday!" The scope is endless. I could have fun with this? Gros bisous de ton ami canadien, David.

You dig up the most amazing stories. Very interesting and amusing. I personally think one of the months should just have dessert days. That would be the best!

That is amazing. I had thought details like calendars were resolved by the 1700s. Then again, we still can't come to terms with daylight savings time.

@ Jemima - thanks so much - I didn't even know 'Brumaire' was a month ... and as you say definitely a place to have found for ideas inspirational re quiz questions ... actually a card game too ...

@ Keith - thanks and yes always learning and always happy to pass on - to discerning bloggers!!

@ David - me too ... fog is alright - but French Brumaire ... ah had me fooled. I see Pheasant, Nightingale, Hen, Duck ... but as you say not many birds (Goose I did see) ... but I love the idea you've created - how about tea on beetroot Tuesday, under the Oak Tree on 2nd April ... and I love Aardvark Monday ... I'd definitely have to include Warthog Friday ...

@ Joanne - thank you ... I really couldn't resist this - but I couldn't have just dessert days, for me it'd be savoury days - but we'd need friends with differing tastes.

Thanks everyone - so lovely to know you've engaged with this calendar! Cheers Hilary

@ Jacqui - I'd never encountered the concept before ... so I'm delighted everyone is bemused by the post.

Daylight Time Savings - an anomaly of War ... but each country works its wondrous ways!

Imaginations are running wild - great to see you - cheers Hilary

So amazing! Always learn something new at this blog, never knew of this calendar. Very cool way of naming the days have to say.

Hi, Hilary - This is truly fascinating. I love what you shared about the French Republican Calendar. I always learn tons from your posts.

How interesting to learn all of the information about the calendar, Brumaire and the French Revolution. So much to take in.

@ Nila - I, as you know, do like writing up interesting posts - so am delighted to see you enjoyed this one ...

@ Donna - I found it amazing and such fun to read up about ... thanks for the appreciation ...

@ Jess - yes there's lots of links to think about, if one wants to, but I always love learning 'odd' things that I think will resonate with fellow bloggers ...

Thanks so much - great to have your comments - cheers Hilary

History is incredible. One can try to erase bits of it, but it is written in blood, not pencil.

I think that is interesting, Hilary. It appears we, as a species, can't stop messing with time. Good to know it's not a modern phenomenon.

"Here endeth my lesson about the French Revolution." As I think about of government and its curious lack of term limits in so many offices, "here endeth my..." is a phrase I long to hear.

Loved your little tidbits about the French Revolution calendar, Hilary. I might like those 3 day weeks, lol :) xx

@ Susan - history really is an extraordinary 'story' - and yes one cannot wipe it under the carpet ... it will reappear in the tapestry of life ...

@ Dan - thank goodness it's not a modern phenomenon - we've enough to contend with.

Yes - I agree with you re I wish people would realise we need to deal with things, tie the laces - and then move on (so to speak). I also wish government could think beyond their elected term ... i.e. long term for the population, and if possible the world ahead.

Thanks to the three of you - it's amusing to think about ... cheers Hilary

Hello, Hilary, I just love how you continue to learn and grow with all these interesting subjects. I remember studying this in school, of course, and reading many books about it. Are there any modern reprints of the calendar, I would love to own one. Hope all is well,I've been a little sickly or just plain old, not sure. But I understand the importance of being creative, so I'm back to blogging again. After a short break.

Enjoyed reading this. ;-)
Always found interesting that the French in 1789 made revolution to get rid of their king, only to get an emperor, 15 years later.

@ Inger - thank you ... it makes each post really interesting to publish - and as you say I learn. I haven't spotted any prints of the calendar - but I haven't been urgently looking around!

I saw you were struggling - but it's great to see you posting on occasions ... it gives the brain a nod - to keep going, at least I find that ...

@ Sean - thanks, so pleased you enjoyed the read. That's right isn't it - lose a king, wait a few years and get an emperor; in Britain we got rid of one kind, then had a commonwealth, then got the King's son back ... we still have a Queen now (400 years on) - a blessing she has been.

Cheers to the three of you - and thanks for your interest. All the best - Hilary

I do love seeing how the dress has affected so many. I am sure it is empowering to wear it, and you become filled with a sense of wonder. Kudos to the story of rebuilding from nothing. Sometimes we think our life will go one way and a sudden detour can unexpectedly capsize the boat. It's nice to see the proverbial clothing dry and the boat get put back into order. Especially nice when others are affected in a good way because of the healing as well. 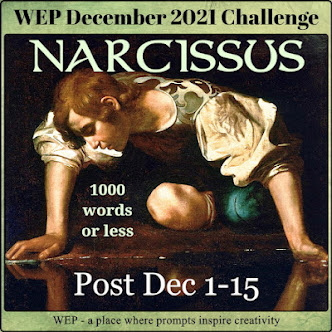