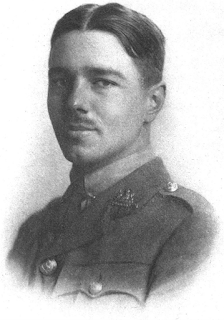 What passing-bells for these who die as cattle?

- Only the monstrous anger of the guns.

Only the stuttering rifles' rapid rattle

Can patter out their hasty orisons.

No mockeries now for them; no prayers nor bells;

Nor any voice of mourning save the choirs,—

And bugles calling for them from sad shires.

What candles may be held to speed them all?

Not in the hands of boys, but in their eyes

Shall shine the holy glimmers of goodbyes.

The pallor of girls' brows shall be their pall;

Their flowers the tenderness of patient minds,

And each slow dusk a drawing-down of blinds.

He had written home including water colour sketches of places, churches and castles; then also the joys he was able to behold … Poppies, Larkspur, Scabious, Ragged Robin and more – despite the absolute trench horror.

There's a very good film – Benediction: which brings to life the poetry of Siegfried Sassoon, who was a mentor to Wilfred Owen who also features in the film.

Some links: The History Girls reminding me about Owen's Anthem …

Wilfred Owen is buried with his men in Ors Communal Cemetery, Northern France

Posted by Hilary Melton-Butcher at 14:11

Ah, I knew I had seen this posted elsewhere recently! You follow The History Girls too. His poetry is wonderful, if you can say that about something so tragic.

You can certainly understand how such times could evoke such deep poetry. :(

And that's a wow and a whoa of a poem. Lovely salute to your Remembrance Day. Our Veteran's Day is this coming Friday. Solemn thoughts as wars still rage.

How true his poem is. As true as it ever was.
I cannot but mourn (selfishly) that his life was one of the ones snuffed out by war too soon, wondering what other poetic truths he had to share...

What a poignant poem.

@ Anabel - yes I have something else to post on Friday - so needed to quickly get a post up for Remembrance day ... and yes I do follow the History Girls. I know the poetry from WW1 is exquisite, yet so sad ... that film is very good if you get a chance to see it ...

@ Joanne - yes the poem is special, as Owen has become more recognised as time went on ...

I know our Remembrance Day and your Veterans Day share the 11th November: the official end of WW1 ...

@ EC - so desperate where these poems came from ... it must have been absolutely terrible to be in the trenches - as now in any war ...

We continue to mourn don't we - all youngsters and all who died prematurely and cruelly because of war ...

Thanks so much for coming by - cheers Hilary

Hari OM
One of my favourites... thank you for this. YAM xx

Wonderful words from someone so young and so sad he did not survive the last week of the war.

I have been reading a lot of war stories recently and although I enjoy them, sometimes they are difficult reading. You might enjoy The Queen of Paris: A Novel of Coco Chanel by Pamela Binnings Ewen. I was fascinated by it.

Beautiful poem (in an aching way).
Too young! War is awful.

What a terribly sad story.

His poetry is heartbreaking and brilliant at the same time. Turns my head inside out to think of it. War is terrible!

Benediction rely does bring the poetry of Siegfried Sassoon to life, although I felt far sorrier for Wilfred Owen.

I personally remember the Vietnam War and how it tore families apart. Even though my boys hadn't been born yet, I have no doubt there would not have been any joy.

One cannot read this, Hilary, and not be deeply moved, and saddened too. My thoughts turn immediately to Rupert Brooke and his immortal lines, surely the finest use of the English language ever conceived, and its awful prophesy for Brooke and so many other brilliant young men of his generation. Still we continue; never will we learn.

WWI was such a gruesome, terrible war. His poetry is very moving and I hope it brought him some peace.

what powerful images in his poetry
why do so many amazing people die young?
that’s the mystery and our great loss
i pray for those in war torn countries
and hope we can keep our cool to stay out of future frays.

@ Diane - it's so desperate when they die so near the end of war ... I gather he didn't write home about his experiences ... just expressed them in his poetry ...

Someone else mentioned about the Coco Chanel novel (Queen of Paris) ... so I've just ordered it ... thought it'd be a good idea to read it - thank you!

@ Lynda - yes - he certainly wrote some tragically beautiful poems -as you say in 'an aching way' ... Far too young, though many younger unfortunately, - War is dreadful ... War created by thugs even worse: I cannot believe what is happening in Ukraine ...

@ Liz - there are too many like these young men, especially now ... why some members of the world are so cruel - I cannot understand ...

@ Nila - heartbreaking is sadly a very appropriate word ... as you say - especially now in Ukraine - so unnecessary ...

@ Hels - I'm glad you've seen 'Benediction' which is more about Sassoon - but includes those poets from that time, especially Wilfred Owen.

I don't remember essentially anything about the Vietnam War - as I had no connection to it - but I did not like war - but can see and from the Americans understand their horror at it ...

@ David - The Soldier is possibly Brooke's 'best' poem - describing the awfulness of a foreigner being killed/dying in a far away field ... and yes he was another of WW1's poets tragic losses ...

We know and wish not - the odd megalomaniac doesn't care to think of others ... so so sad ...

@ Elizabeth - you're right - WW1 was terrible, as is all war - I hope he got some solace in setting his words down - knowing that they might in due course reach the wider world ... which they did - thank fully.

@ Tara - good to see you ... Your words ring very true - I hope we can stay out in future - but some need our support, as Ukraine.
All well here - thank you ... I will be glad when it's Spring though!

Many thanks for your visits - I just so wish people didn't need to be so bombastic in thought, word and deed - totally unnecessary ... I just wish for peace ... with thoughts to you all - Hilary

Letters like this fascinate me. I wonder what their lives looked like. This poetry and photo is very intriguing, like a story waiting to be written :)

I'd forgotten how young Wilfred Owen was when he died. He was such an important voice of that war, bringing the truth of it to the many. So sad he died without seeing peace.

Such a moving tribute to the fallen young lives.
And thanks, Hilary, for introducing me to Wilfred Owen.

Great poem by Owens. and it resonates at this time.

@ Damyanti - it is very thought provoking, though I'd have hated to live in those times ... I'm grateful for my relatively cushy life.

Wilfred Owens was obviously very talented ... an artist, as well as a writer, then all the poetry - so little in such a short life time - cut short by horror ...

@ Annalisa - yes ... so many young men were lost in both the so-called World Wars. We're lucky to have their moving words to consider and to reflect - particularly this one today - Remembrance Day here in the UK: November 11th.

@ Pradeep - thank you - I'm so pleased you appreciated reading the poem and learning about Wilfred Owen ... those World War poets bring the horrors into our homes of today - and remind us of others still continuing ...

We never learn, do we. The same mistakes repeat in each generation, just different names and places, each rhyming in a terrible way. Alana ramblinwitham.blogspot.com

Such a powerful poem and a thought-provoking post for Remembrance Day. Thank you to all who served! 🌺

Thank you for sharing this beautiful poem. I am a fan of the war poets. Such a tragedy he died so close to the end of the war.

@ Alana - well I'm sure most of us learn - it's just a few megalomaniacs who seem to think they can rule the world - the one from the east I'm particularly thinking of - rotten villain.

I'd love humanity to have peace and be thoughtful to others ...

@ Debbie - yes ... it's an evocative poem from World War One still unfortunately so pertinent today ... and as you say - thank you to all who served: We must remember them.

@ Robbie - I really wish I'd spent more time enjoying history - I only came to it late ... now I explore things that resonate ... these War poets must have felt so emotional ... but unable to return home til their time was up - injury, death or end of war ... very sad ... thanks for visiting ...

Remembrance Day was yesterday and we had the Service at the Cenotaph in Whitehall in London - always a very poignant day ... thank you for your comments - Hilary

Such a thought-provoking poem. Sad that he died so young, just before the war's end. My dad was in WWII toward the end then he was off to Korea. He never spoke of his ten years in the military. At least this young and talented poet was able to express in feeling within his poetry for all of us to learn and FEEL the aspects of war...

Wishing you a wonderful and safe holiday season, Hilary!

Thanks Michael - good to see you ... War is dreadful ... leaving death, damage to mental health, or disability ... my father too, nor my mother ever spoke about their wars ... I can realise now the suffering they were going through ...

These War poets have given us some evocative and sad poems ... too desperate to think about, yet we remember their lost lives.

Thank you for your thoughts - we don't do Thanksgiving ... we wait til Christmas - but lots going on regardless ... I hope you have a happy enjoyable time - cheers Hilary