The great divide – that Iron Curtain separating Western Europe from Eastern Europe – is now known as the European Green Belt – who would have thought it? That border defence symbolising the ideological and physical boundary dividing Europe from the end of World War II in 1945 until the end of the Cold War in 1991 has now with the foresight of a German doctor become a Nature Reserve.
above: Panoramic image of Danube pictured in Ritopek, suburb of Belgrade, Serbia. 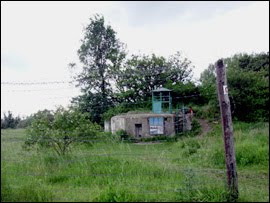 Growing up within sight of the wall a young West German boy with an interest in nature used to roam the boundary and hinterland jotting down and recording all possible wildlife sightings – and as anyone with a hobby knows it slowly grows into a passion until it is a part of their life. Dr Kai Frobel became a man, a family man, a doctor, an ornithologist and conservationist – and as such realised the significance of these so-called restriction zones and the way the ‘Wall’ had been constructed.

Border post watch tower, rusted barbed wire
Churchill had coined the phrase “iron curtain” from the antagonism between the Soviet Union and the West – fortunately it was never a curtain, nor an iron one .... but the imagined vision of chain mail hanging from the clouds somewhat bemuses me. The “wall” was in fact a series of strips of land fenced with barbed wire, watch towers etc – different sections sometimes hundreds of yards wide, one barren strip, while the rest were almost untouched by human hand for 37 years had become natural wildernesses.
These strips of land containing small bushes and grasses, which had been wiped out with industrial farming on the western side of the iron curtain, became wildlife havens for threatened species of birds, mammals, insects and plants. A treasure trove of wildlife, including black storks, wild cats and whinchats, wood grouse, and a range of rare mosses. 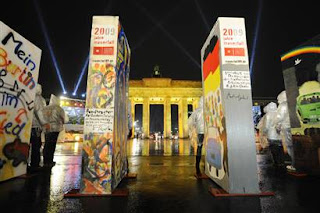 The actual start of the “fall of the Wall” was in Poland with Solidarity’s historic victory in June 1989, before Gorbachev had visited Berlin later in the year, criticising the East German regime which precipitated the domino-like effect of the collapse of other eastern bloc countries’ defences, that we saw portrayed in the news on 9th November 2009, with the painted dominos depiction in Berlin.
Giant dominos lining a segment of the route of the Berlin Wall were toppled Monday during a ceremony commemorating the 20th anniversary of the wall's fall. c/o Axel Schmidt / AFP - Getty Images

These swathes, off limits to most personnel, of prohibited and deadly strips in the aftermath of the Iron Curtain’s collapse, left behind a refuge, a haven for wildlife and nature to flourish in: an ironically uniquely natural fertile world, where many rare and endangered species flourished.
Dr Frobel’s early observations became suddenly “an Eureka moment” – a realisation that his special patch of Iron Curtain, with its abundance of undisturbed wealth of plants, birds, insects, reptiles, and small mammals would presumably have also occurred down its entire length. A different hunt was on – an urgency to secure this unique landscape as a nature reserve. 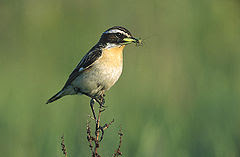 With Kai Frobel’s foresight, his knowledge of the land, his enthusiasm, his lobbying in high places has ensured a pan European effort of a green belt connection, consisting of National Parks, Nature Parks, Biosphere Reserves and trans-boundary protected areas transcending the potentially narrow thinking. The aim now is to turn the Iron Curtain’s entire 4,250 mile length into what is already being called the Central European Green Belt.
Whinchat: Adult male in breeding plumage
Two decades after the fall of the Iron Curtain, the creators of this amazing ecological treasure trove are celebrating the fact that 23 European countries are currently engaged in the project to turn or keep its entire length into the reserves naturally occurring after the 37 year period of non-interference. 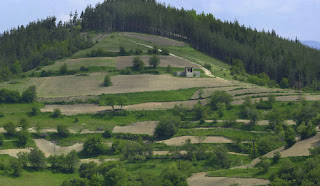 It will run from the Barents Sea within the Arctic Circle, south down the Finnish – Russian borders, through the Black Sea, down through Germany and central Europe, with three spurs to the Adriatic Sea, finally east along the border of Bulgaria, Greece and Turkey to the Black Sea – some journey, some nature reserve, some brilliant thinking to tie all these together into a natural swathe for wildlife through the middle of the European Union landmass.
In the foothills of Rhodope Mountains (Sofia Echo Newspaper) - Photo: Nadezhda Chipeva
The national ecological networks, the biosphere parks, wetlands, floodplain meadows, riverine habitats, deltas, wildflower meadows are where many species, that have disappeared in extensively agricultural or industrial areas, can feel at home and have flourished in these quiet and undisturbed parts of middle Europe. 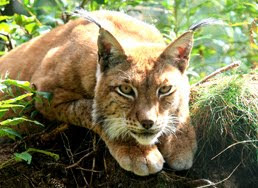 Where else, to name but a few, would you get wild daffodil meadows, alluvial forests, fish spawning grounds because the standing water stays so warm, traditional scythed meadows, fens, oak, poplar and willow forests, river banks for nesting sand martins and kingfishers, the return of the European Lynx, originally living all over Europe, but returning today?
Eurasian Lynx

The legacy of this unique and extraordinarily rich chain of ad hoc nature reserves will be enormous to the scientific community – the botanists, the biologists, the geologists, geographers, conservationists, environmentalists – who will revel in this natural world and can record and gather all sorts of information for posterity about these unique areas that remain within this once reviled landscape, now reborn as a jewel of nature.
Dear Mr Postman – the gales and rainfall continue, but I gather we’re not alone the same is happening in the States. We’re well – I have had another trip to the hospital with my neighbour who inadvertently had tripped her latch, so we needed to break in to let the ambulance crew in – she hasn’t broken anything .. but another day! Her son has arrived today – we go on and my mother is quite sleepy.
Hilary Melton-Butcher
Positive Letters Inspirational Stories
Posted by Hilary Melton-Butcher at 14:08

Good grief Hilary, you are an angel to help out your neighbor as well.
You are good to have around and you are so kind to help out.

The iron wall now a sancturay of good; is this symbolic for the world?
I am sure it is.

I absolutely loved this concept and reading about the wall.

Although spring, the weather is not as warm and sunny as it could be.

Love to you both.

Hi Hilary, Your blog title jumped out at me when I was over at Blogging Without A Blog.

How wonderful that something beautiful was saved by the existence of something bad. I wonder what that land would have been like if it wasn't for the Iron Curtain?

Hi Wilma .. I somewhat couldn't believe it - but that's life - it is the 3rd! Surely the last? Gwenneth is home now - not broken, but a lot of pain from ? a caught nerve. She can't move that well - but I hope I won't need to be around much - I'll get my bed back - borrowed one, so she can sleep downstairs.

I hope this amazing natural swathe of wilderness will offer an example to others .. but developers in Greece have been setting fires to clear land .. so a few will unfortunately be out to profit themselves.

When I found out about it .. I too just thought how wonderful.

Here - it is drenching down and they've got terrible floods in the north and Scotland. It is very warm 14 dec C.

Hi Cath - thank you for coming over - and glad the title stood out - an important element of our posts.

The lands in the west were and are agriculturally advanced, whereas the east had the pre agric-industrial (1800s) working methods - hands on and therefore much more natural. There were no fertilisers used either.

Oh wow...this is amazing! I have been to Europe but not to anywhere near the wall. It is great that the entire piece is now being put to good use! Love the photos you have posted!

Hi Evelyn .. it is encouraging that nature is being allowed to stay - and the various types of environment within this huge mass of area are truly incredible - a wonderful heritage for the future. Glad you like the photos ..

Thanks for highlighting the difference that one person with a passion can make. I read that the De-Militarized Zone (DMZ) separating North and South Korea is also a wildlife haven because no human encroaches on that land. Hopefully someone else will come along and preserve that too when peace is restored.

Hi Daphne .. that's a logical follow on - so I agree I hope that that tract of land between north and south Korea will be maintained as a wildlife haven for the peoples.

As you rightly say - one man's passion - has linked, held and led the project - it looks an amazing place with all its different haven along the route - between countries, rivers, up and down dales etc ..

This is why I love reading your blog posts. You always share such wonderful lessons.

I had heard of the Iron Curtain, but didn't know what it was nor why it existed. Now, thanks to you, I do.

I pray all is well with your mom. I'm sending hugs her way.

Hi Barbara .. thank you so much - I truly appreciate your comments. Trust me I'm learning too!!

I'm pleased that you're now aware of the Iron Curtain and what it was .. and what it has left us .. this wonderful strip of green - lets hope it is preserved properly.

My mother is 'fine' .. and always grateful to hear from friends around the world -

Many thanks - you're a star - love Hilary

This is absolutely incredible. I am very grateful you choose to share this perspective. Many people who do not live near that reserve may be consciously unaware of its existence. The green idea is such a healing colour.

Hi Liara .. I'm glad that you've enjoyed this post. I think perhaps none of us would be aware of the potential of something so 'painful' could turn out to offer a natural healing strip in this world. As Daphne said about the border between North and South Korea .. natural wilderness abounds.

Nature is wonderful in its array of colours - soothing greens ...

and i am glad there is plases teh annimils can go and be safe in yurope wit no ironed kurtin. i feels safe wit my jannie and i hops all animils can be happee too.

Hi Blue Bunny .. I know - me too loved that kitty - had to put his picture in .. I suspect he'd have your Jannies kitty for a snack.

Me too .. it's good to have a protected space for the flora and fauna in Yurope .. I bet you feel safe with Jannie .. you enjoy your Christmas time - lots of cuddles ..

Ober and out too!