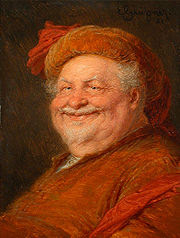 Guess what today is? Well a few things actually – yes St Hilary’s Day, as well as two celebrations and a few connective links. Have you ever wondered where the word ‘humour’ comes from – the Greek; from the humoral medicine of the ancient Greeks, which stated that a mix of liquids known as humours controlled human health and emotion.

Smiling can imply a sense of humour and a state of amusement, as in this painting of Falstaff by Eduard von Grützner (1846 – 1925)

Well today is a day for emotions – celebratory emotions .. this little blog has commenced its second year – which amazes me .. and to all my readers and followers – I say THANK YOU! I’ve enjoyed the creation and am amazed at the pleasure it gave my uncle and still gives my mother – she always asks what the next story will be about .. as in fact do quite a number of others who have no access to the internet. This next year will see new things springing up giving it new shoots.

I seem to be true to my blog name and my ‘given name’ – as Martin Seligman, one of the founders of positive psychology, in his book Authentic Happiness, describes happiness as consisting of “positive emotions” and “positive activities”. Being happy and cheerful as I go through life seem to apply, especially as the derivation comes from the Latin for ‘hilarious’.

The best medicine is laughter and my mother and I laugh together at all sorts of funny stories I bring in to tell her about. We all respond to humour, whatever age or culture we are from, and I’m grateful that my blog has allowed me, at times, to express my sense of humour.

A sense of humour can depend on so many variables, including geographical location, culture, maturity, level of education, intelligence and context. We as children used to love slapstick .. and often watched Charlie Chaplin, or Tom and Jerry on 16 mm film hired by my father, with great roars of childish laughter ringing out.

St Hilary (c300 – c368AD) was Bishop of Poitiers, in France, and a Doctor of the Church. His parents were pagans of distinction, but made sure he had a good education, including some Greek, before he studied Old and New Testament writings with the result that he embraced the Roman Catholic Church.

The Ordination of Saint Hilary. From a 14th century manuscript. 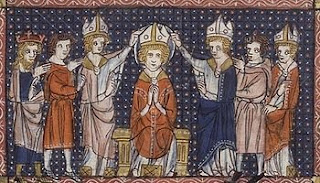 Ultimately Augustine of Hippo designated St Hilary as “the illustrious doctor of the churches” Hippo Regius was a major city in Roman Africa, situated in modern Algeria, and was the home to Augustine (354 – 430D), the philosopher and theologian, who is one of the most important figures in the development of Western Christianity.

Well the judiciary very kindly named their court sittings after me – so this term is known as the Hilary Term – I am now ancient – of the early medieval variety??!! The judges and their courts travelled the country over seven circuits to the Assizes in various towns, to hear the cases, in four sessions known as terms: Michaelmas, Hilary, Easter and Trinity. 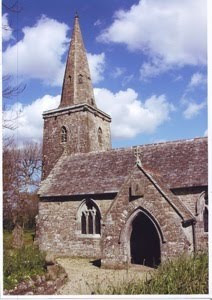 Oxford and Dublin Universities similarly named the January term “The Hilary Term” after the Feast of St Hilary, which they declare is on 14th January ... however the academic year consists of three terms. Oxford University has no clear foundation date, but teaching existed in some form from 1096, and it is acknowledged as the oldest surviving University in the world.

Today, (if I get on with it!) the13th, is Saint Hilary’s day according to the Roman Catholic calendar of saints, but in the past when this date was occupied by the Octave Day of the Epiphany, his feast was moved to 14th January . An Octave Day as here allows for an eight day period to observe certain major feasts, such as the Epiphany.

I’ve had a quiet day, birthdays in January in the snow and ice don’t really portend well for partying – still I have lots of rain checks! I seem to have heard from friends around the world – South Africa, Australia, Abu Dhabi, America and lots of friends from here .. so all in all – lots of happy thoughts: can’t do much about the weather. 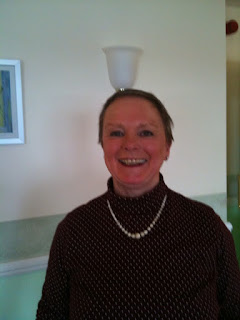 So for now – Happy Birthday to me .. all of 62, Happy first Anniversary to my blog .. lots of information on the name Hilary and how appropriately I am named, especially as my father was at Oxford University (I only made the school there!), and was a lawyer; (see above) there’s a church of St Hilary in Cornwall in the village of that name (but I don’t think they named it after me!), which has Roman connections – them Romans got everywhere!? Oh yes – and I live at number 13!

I know the light shines out!

Dear Mr Postman – well done for venturing out in this unfavourable weather – and I thank you for the cards that you’ve left for me – her and up with my mother. My poor Ma is not too well – she has a fever and raging sore throat – and in the three years she’s been ill .. she’s only had one other minor infection – she is one strong lady & my mother – bless her.

hmmn, I wunder when is saint blue bunny day??

Wow, so many wonderful connections coming together today.

Happy Birthday, blog's and in the flesh.

Good to know your mom looks forward to your post tool

It's a wonderful, wonderful world indeed!!

Thanks for your sentiments - yes Mum enjoys the chat about my blog .. and keeping involved in life as such ..

It is a wonderful, wonderful world .. as you say -

Yes, the international aspect of blogging is a lot of fun - discouvering, for example, the different, uh, colouration of English in its different fourms around the... wourld...?

Happy Rainchecks Day, is it?

Civil Rights For All said...

Saint Hilary pray for us may we always laugh and see lifes joys!

Interesting story I love to learn about the saints, the Fathers, Doctors and many people of the Church.

Happy Birthday Hilary I hope you have a great day as everyday should be great!

From the Utke Family

Hi Paul – thanks for the visit and leaving such an interesting comment ... how right you are the different spellings ... pity the Americans can’t spell??!! And keep our English way of spelling .. make life easier for us all internationally??!!

Yes – tricky to learn the different ways of spelling, saying some words, understanding different connotations etc etc .. please don’t muddle me and others!! I’ll be speaking Blue Bunny lingo all the time!

I’d rather it was rain cheques .. but rainchecks will do too! Great to see you here .. especially as you sign off with my favourite (or favourite) word ..

Cheers to you too .. have a good Feast of St Hilary Day ..
Hilary Melton-Butcher
Positive Letters Inspirational Stories

Hi Joanne .. thanks for coming over. I agree may we all laugh and see the joys of life.

Glad you learnt some extra bits of information – quite a lot going on yesterday ..

Hi Daphne .. yes I expect you remember the cold of central Oxford at this time of year! Spires in the fog, or misty frosty College quads .. healthy walks along the river banks .. and a warming tea in front of the fire on our return.

What a great post. Enjoyed so much the reading. Blogging is great isn't it. I have found so many new friends and I love writing.

Hi Journaling Woman - great to see you here .. and thanks so much for the comment. Yes - the friends and interaction are brilliant - love it, too.

You too - we'll both keep blogging away .. another year .. and it's good to know you enjoy the posts.

i kant wate untill then.

how kan i sleeps wit all so mutch excitemints??

Hilary, all this insight is eye-opening for many people. It is also said that a personality evolves and a person grows into his or her name. Unsure how you feel about that. Some people sense they evolve to be like someone they R not while other people sense they evolve to remember who they are which is unique. Blessings to you & Happy Saint's day!

Happy Birthday to you and your blog. Wow two years is a long time. I think I'll start sharing my blog with my mom. I've never thought of that before! Looking forward to year three!

Hi Liara .. Fortunately I’ve always bounced around, or bounced back – we all have quagmire moments – so I feel I was named correctly .. surprisingly. I hope I’m evolving so that I’m unique, I don’t like being put into a box and labelled up!

Thank you for the salutation ... and just glad everyone enjoys the information.

Hi Tess – thanks for the thoughts .. no – the blog has started its 2nd year .. only been going one year and two days!! The bod has been going a few more years!! I’m sure your mother would be really interested in your blog and your books etc – and interested to hear our comments .. my mother is amazed that I have readers from around the world. I’ll be interested to hear your mother’s thoughts. Thanks for visiting and congratulations for the 12th.

Hi Mark .. many thanks .. it's been an interesting week - with all the snow and ice .. celebrations to follow!!

Congratulations, Hilary! Two years of blogging is a milestone! You've done a lovely job, educated us, and brought much laughter to our days. Here's to a new and improved (and not so medieval) St. Hilary! Now take a bow. :-) Blessings, Jan

Thank you so much for so comments - really appreciated. Absolutely can I rejuvinate .. oh those bygone days .. youth.

A bow and a scrape .. oh dear work to do on the floor!!! You too - have a lovely weekend ..
Hilary Melton-Butcher
Positive Letters Inspirational Stories

Hey Hilary, a very Happy Belated Birthday to you and Happy 1st year to your blog. May you be blessed with Great health, Love, Joy and Peace.

Hi BK (Symphony of Love) - many thanks for the thoughts - it was a raincheck birthday - snow and ice don't help!! Snowchecks as someone said!

I'm surprised a year has past for the blog - but it has I'm pleased to say.

You too have a really good year as you've wished me - everyone needs good health, love, joy and peace - so for the world too ..

Happy belated birthday. I enjoyed learning about Saint Hilary. Is there where the word hilarious comes from?

I need to visit you more often, your posts are so informative.

BTW I loved the picture of you. It was truly hilarious:~)

Hi Sara .. thank you! It was cold and freezing!!

Yes - it's derived from the Latin, out of the Greek, hilarious for cheerful, happy!

Glad you enjoyed the birthday photo .. and your comment .. good to see you -
Hilary Melton-Butcher
Positive Letters Inspirational Stories

Better late than never, congratulations on all counts and having a St Hilary is quite cool and I love your ; please come and visit . . . always open.
Love Wilma and now I am up to date.

thanks for coming over – I know you’ve been busy with lots going on & happening. I’ve always been surprised how the Hilary’s all came together .. and love telling the story – as it brings out so many interesting facts from our history.

Great to see you and thanks for coming across to comment .. love Hilary