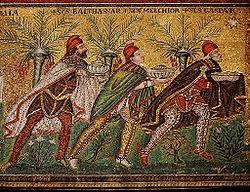 What's the connection with chalk, wise men, the stars and three valuable commodities - well it is the Feast of the Epiphany.

Magi, a plural term in Latin, or based on the word in ancient Greek, Persian and English ‘magus’, which since at least the 4th century BC denotes a follower of Zoraster – a person able to read the stars.
Byzantine depiction of the Three Magi in a 7th-century mosaic at Basilica of Sant'Apollinare Nuovo, Ravenna, Italy

Among the ancient Medes and Persians, the Magi were members of the priestly caste credited with great occult powers, and deriving their knowledge from the Brahmins of India: this was chronicled by Ammianus Marcellinus (330 – 391AD), a Roman historian and by the earlier Arrianus (86 – 146 AD) in his account of Alexander the Great’s foray into India, expressly called the Brahmins “magi”.

The Three Wise Men of the East, in Christian tradition, brought gifts to the infant Saviour guided by the Star of Bethlehem. These Three Kings as they were also known, and recorded in the popular carol “WeThree Kings of Orient Are” brought gold, frankincense and myrrh as offerings. 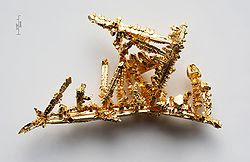 The first king of the east, named Melchior – meaning “King of Light”, offered Gold, the emblem of royalty; as a symbol of kingship on earth, or more generally described as symbolizing virtue.
Gold crystals
Caspar – meaning “the White One” – the second king, offered Frankincense in token of divinity; the incense is a symbol of priest-ship and prayer.

While the third king, named Balthazar – meaning “The Lord of Treasures”, offered Myrrh in prophetic allusion to the persecution unto death which awaited the “Man of Sorrows”. Myrrh is the embalming oil, symbolising suffering.

These three gifts were all extremely valuable to the communities of those days: gold came from the Nubia region of southern Egypt and northern Sudan and was claimed (in Egyptian hieroglyphics (2,600BC)) to have been “more plentiful than dirt”. (Similarly gold was found in other areas such the Indus valley and middle America, reflecting early man’s use of the precious metal).

Frankincense is an aromatic resin obtained by tapping the Boswellia genus of tree and is particularly used in incense, perfume, as well as being an essential insect repellent. This hardy scraggly tree is unusual for its ability to grow in environments so unforgiving that they sometimes seem to grow directly out of solid rock. 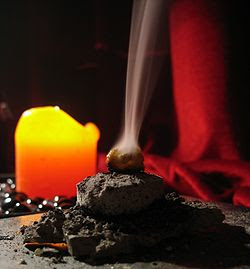 Omani frankincense is said to be the best in the world, although the fine resin also comes from the Yemen and along the northern coast of Somalia. Recently the Frankincense Trail or Incense Road has shown the value of frankincense because of this long trading route through southern Arabia – see my next post.
Indirect burning of frankincense on a hot coal
Myrrh is a reddish-brown resinous material, the dried sap of a number of trees, but primarily from Commiphora myrrha, which is native to Yemen, Somalia and eastern parts of Ethiopia; while the sap is obtained from other Commiphora and Balsamodendron tree species in Jordan and Eastern India.

Myrrh was imported by the Ancient Egyptians as far back as 3,000BC when they used it to embalm their dead, as an antiseptic and burned it for religious sacrifice. It was also used as a constituent in perfume and incense. The Eastern Orthodox Church still uses myrrh to scent the “holy oil” used when performing the sacrament of “receiving the Myrrh”.

In Ancient Rome myrrh was priced at five times as much as frankincense, though the latter was more popular – because it was cheaper?, and often myrrh was worth more than its weight in gold. Myrrh has become synonymous with the word for “perfume”, and Pliny the Elder refers to it specifically as the “Royal Perfume”.

Over the centuries, differing churches and sects of Christianity have changed the actual traditions, time frame and their interpretations; in the western Church this period of the twelve days of Christmas and festivities known as Christmastide now traditionally ends on January 5th, before the Feast of the Epiphany on the 6th. 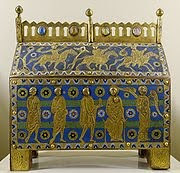 Epiphany is the manifestation of Christ to the Gentiles, i.e. to the Wise Men from the East. The Christians fixed this date quite early in their history. The earliest reference to Epiphany as a Christian feast was in AD 361 by Ammianus Marcellinus, where he asserts that January 6th is Christ’s “Birthday; that is His Ephiphany”.
Journey of the Magi (top) and Adoration of the Magi (side) on a Limoges champlevé enamel châsse, ca 1200 (Musée de Cluny, Paris)

On the Feast of the Epiphany, the priest, wearing white vestments, will bless the Epiphany water, frankincense, gold and chalk. Chalk being used to write the initials of the three Magi over the doors of churches and homes. The letters stand for the initials of the Magi (Caspar, Melchior and Balthazar) and also the phrase Christus mansionem benedicat, which translates as “may Christ bless the house”.

According to ancient custom, the priest announced the date of Easter on the feast of Epiphany. This tradition dated from a time when calendars were not readily available and the church need to publicise the date, since many celebrations of the liturgical year depend on it. 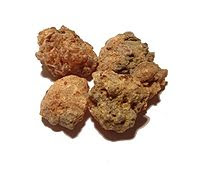 Somali Myrrh (Commiphora myrrha)
Easter is a moveable feast, meaning it is not fixed in relation to the civil calendar, but is set as the first Sunday after the full moon (the Paschal Full Moon) following the vernal equinox. Ecclesiastically, the equinox is reckoned to be on March 21st, and the date of Easter therefore varies between March 22nd and April 25th. This year (2010) it will fall on April 4th.

So now comes the clever bit! In my recent post on Blue Moons, I mentioned the nineteen year period, when a thirteenth or blue moon appeared in seven of those calendar years. This period of 19 years is used to determine the date of the Paschal Full Moon each year, because it produces a set of civil calendar dates for the ecclesiastical moons that repeats every nineteen years, while still providing a reasonable approximation to the astronomical facts.

This Metonic cycle has been named after the Greek astronomer, Meton of Athens, when he introduced a formula to harmonise the calendar with the solar year, circa 432BC. The cycle’s most significant contemporary use is to help in flight planning (trajectory calculations and launch window analysis) for lunar spacecraft missions, as well as serving as the basis for the Hebrew calendar’s 19 year cycle, while also as previously mentioned the setting of the Christian Feast of Easter.

Dear Mr Postman – my mother seems to be sleeping quite a lot recently – and I don’t blame her tucked up warm and cosy in her bed. The cold, ice and snow do not abate – and the country is slowly grinding to a halt today – we have had a flurry here on the south coast, but the clouds were foreboding, and the weather forecast does not make kind reading.

Classical Story,
It is neat to share it and help youngsters learn from it. wisdom grows when one gets in.

from jingle
http://www.jingleyanqiu.wordpress.com
just in case.

Hello Hilary,
Just stopping by to say hi. Most interesting post! I knew that these 3 elements were highly highly valued in their time. And very expensive today too. I just bought some Frankincense incense. Very nice.

Read your note about mom. Hope she is well. Such cold weather makes many of us sleepy.

I appreciate you participating in the 28-Day Meditation Challenge at my blog. I hope that you were able to find some pockets of peace today. :-) xo

Hi Ji .. nice to see you here - thanks for coming over.

I hope youngsters can enjoy and learn from some of the info here. As you say wisdom grows as we absorb our experiences.

Hi Jan - thanks for your 'concern' .. I'm fine - just got thrown with meetings up at the Home. So I'll be participating .. just a day or two behind. Mum is fine - just odd for her to have blankets on!

Thanks for your comment on the Gold, Frankincense and Myrrh post - and I see you're supporting the Frankincense Route! Glad you're enjoying the aroma.

Such an informative post. That's what I love about your blog; you always find fascinating stuff to write about.

Just the other day a local restaurant named "Balthazar" was advertising on TV. Now you've taught me what the name means.

And the blue moon. Yup! I saw that too.

Like you, I can understand why your mom is all snuggled up. The Winter months are a perfect time to do that.

Hi Barbara .. Have a successful 2010 and Happy New Year too.

So glad you liked the post and info - there's more to Balthazar than a wise man! It is interesting though - as soon as one is aware of something.. that info is obvious in so many other places - I'm amazed at the connections sometimes.

Blue Moon - just different info I hadn't heard of or registered perhaps .. or realised why.

Fortunately we have sleet - there's a thick covering of snow elsewhere .. and would love to hibernate just now!

Thanks for the hugs - she loves hearing from her blogging friends!
Hilary Melton-Butcher
Positive Letters Inspirational Stories

We have snow here and expecting more today 3-6 inches. ugh.

Hi JW .. thanks for coming across .. the Witness Protection Programme look alike! Glad you like the information .. these stories of where things, that we use everyday in our lives or know about, come from really educate me.

It's slushy here on the south coast .. but other areas including further west are pretty well covered .. but not like I remember in 62/63 - then it went on for 6 months .. well we had our snowman still in June (just!!).

Hi Joanne .. glad you enjoyed it and found the information interesting. We're well despite the cold and north east wind I can feel blowing around!!

I just remembered that we had a dish soap, what you call "washing up" in Canada called Mir. Or maybe it was spelled Myrrh? It. Was good bubbly stuff and almost worth it's weight in gold.

Hi Jannie .. I wonder why? Perhaps others have called their soap dishes by name? We do tend to 'adopt' things sometimes .. Could you spell Myrrh when you were a kid? Or perhaps I misunderstand and it's a bubble creating soap .. good stuff covering all necessities - dishes and clothes? We had a hard green soap - known as Sunlight .. there's a town too where it's made!

You too - but not cheers with your bubbles, I'm coming over for a glass of vino!

Love how you encourage your readers to broaden their horizons. Many people may have heard the names of these substances but may not be aware exactly what they are or their origins. Peace and blessings to you wherever you go!

Hi Liara .. many many thanks – it is broadening my own horizons and learning as I go. It just is interesting to find out about so many new things and then following the trail and finding out more! Not going far at the moment – one day I’ll be out and about travelling again.