The last book (for now) is titled Circling the Midnight Sun: Culture and Change in the Invisible Arctic by the Canadian geographer, writer, speaker: James Raffan. 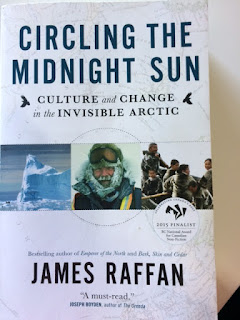 I found this book riveting ... it's about the four million people in eight countries, speaking dozens of languages and representing almost as many indigenous ethnicities.

It highlights that we (in the middle latitudes - as Raffan describes it)  may be worrying about climate change - but they (the indigenous peoples) are concerned about their loss of language, cultural decay, loss of land - which we purport to own - yet they have travelled and accessed those lands for millennia ... their lands are their home - their soul ...

Raffan decides to circumnavigate the globe at 66.6 degrees latitude: the Arctic Circle.  He is Canadian,  but starts his journey in Iceland, and on via Norway, Sweden, Finland, various places across Russia, over to Alaska and then into Canada ...

... this is where having read Island of the Blue Foxes, as mentioned in part 2, was really helpful ... I had some notion about Siberia ... and now recognise some of the names.

Yes, I have other books on the go ... but I thought you'd be interested to know about these ... back to normal posts in the future - but more books will follow anon!

Posted by Hilary Melton-Butcher at 07:00

Thank you so much.
Definitely a book I need to track down and explore.

Another one for the wish list, Thanks for these posts Hilary. Have a good week Diane

Nice to know about the book!

One of these days, I need to travel north on an adventure and see some of thes places!

Indigenous people are too often the forgotten people.

Here is your best line. We in the middle latitudes may be worrying about climate change but they (the indigenous peoples) are concerned about their loss of language, cultural decay, loss of land. Yes!!!

I would still put climate change at the top of the list, but I would recognise that the indigenous peoples did not cause climate change around the world. Not even in their own areas.

sounds quite interesting. Does make one think about the bigger picture for life.

Wow, that does sound interesting!

@ Sue - yes do come and see some of these areas of the world, though I'd love to come down under and look around Australia ...

@ Hels - I think probably most of that line came from the book blurb ... which is so appropriate - they are much more concerned about their loss of language, cultural decay and loss of land ...

There is so much we could all do to live in harmony and that would help ease climate change ... we'd all be helping each other ... and letting indigenous peoples live as they've always lived, while respecting their way of life and not interfering ...

Thanks so much - and I'm glad you're thinking of getting the book to read: that's great ... cheers Hilary

That does sound so interesting. Those people are amazing how they live in such harsh conditions most of us couldn't imagine.

Hi, Hilary! What a fascinating book. I'll have to add it to my to-read list. As always, thanks for the visuals to help me see where we are. I like how you connected the culture and land of the indigenous peoples to their souls. Very powerful. Their land should be their home. I learn so much reading your blog. Thanks! Enjoy your summer.

I don't know much about the Arctic or the people who live, so this post opened my eyes to a few facts. Thanks!

Some times I think we come from different planets - you are so incredibly smart. I have never heard of these people and had no idea something like this exists. You are so brilliant. I am a commoner! sandie

@ Susan - it is a fascinating read - and I need to re-read the Canada sections. Certainly Raffan has an expert eye as to indigenous needs and thus what they are enduring now ... as the world as it is today encroaches on their lands ...

@ Victoria - I'm delighted a friend recommended it to me - and really enjoyed the eye-opening read. Thanks re the phrase ... 'the connection of their culture, their land is tied to their souls and forebears ... and thus should be their home' ...

@ Liz - it is an amazingly interesting book ...

@ Sandie - nope ... we're from this same earth! I just for some reason have decided to start my learning curve at 60 ... and am always pleased when people are interested in the sort of posts I'm putting up ...

Thanks so much ... I just hope you'll all get a copy to read - so well worth it - cheers Hilary

His journey certainly puts my travels in the shade! I'm sure it's a fascinating read. I have been a bit quiet in your comment section of late, mainly because I'm not a great reader of books - writing yes, reading no!

Just the title of this book "Circling the Midnight Sun" has me captivated. I've not only enjoyed reading this series of posts about the books you've been digging into, but I'm also enjoying seeing how you settle into research and discovery - it's a wonderful process to witness.

@ Keith - totally understand ... I was in your position until I read the Patrick Leigh Fermor books two years ago ... and particularly now since I was invited to join the book club ... which I'm totally enjoying - hence the books ... and research into things Canadian ... a learning curve to say the least.

@ Deborah - it's been an interesting journey ... and relative to my reply above to Keith ... I've been so lucky being directed to look at these books and then able to read them ... as too finding things out about Canada - and somehow serendipitously finding these connections as I went from place to place and met people along the way - who added to the jigsaw puzzle of my knowledge of this area ...

Sounds fascinating! I didn't realize just how many people live up there.

I'm getting an education from you Hilary on my own country. So thank you. :)

It's heartbreaking to know that an entire region of people is facing the loss of not just their land but their culture too.

@ Debby - it's good to learn more isn't it - and I'm enjoying meeting various people along the way ... I've been lucky in how I've come across things ...

@ Elsie - it was so interesting reading about the many peoples in the area and learning more about their ways of life, as too their culture ...

Thanks so much to you four ... great to see you - cheers Hilary

Yep, when you want to buy a copy of the book you have borrowed, that really does say it all. :) Hurrah for awesome reads.

I bet it's cold up there in the winter!

I love that you are always stretching and broadening your horizons. You're an inspiration to us all.

Sure one place I wouldn't want to live, but quite impressive how people live there and quite the sight to see.

Indeed a neat idea for a book. I had a senior exchange student from Finland some years ago. A really neat boy. His people live in the artic and raised reindeer. I don't remember the name of the group or whether they were nomadic or not...

@ Rosey - I'm glad I've got a copy and must make a plan to reread the Canadian part ...

@ Sherry - I bet it's pretty freezing above the Circle ... I certainly couldn't live there ...

@ Troutbirder - I hope the book gets recognised and more people get to read it ... it's so appropriate for today ... we 'the middle latitude people' really need to appreciate those who live with the land. Pity you don't remember a bit more about your Finnish exchange student ...

Thanks so much to you all - cheers Hilary

Looks like this is another book I should read. Will check it out. And, next week, sometime, I will post Rust no.18, check it out. It's SA rust!

Hi Inger - how lovely to see you ... and yes I think this book would bring back some memories of earlier days in Sweden and Scandinavia ...

Great - I'll keep an eye out for South African rust!

You are certainly getting hold of some interesting books Hilary. This one in particular sounds good. An interesting journey.

Hi Jo - this is a very interesting read ... which I enjoyed ... perhaps you'll look it out ... cheers Hilary

Wow! This sounds so fascinating. Thanks for sharing. :)
~Jess

Hi DMS - this was a particularly interesting book ... I really enjoyed it. I hope you get to enjoy reading it too ... cheers Hilary