Gathering taxes by a Hedge? 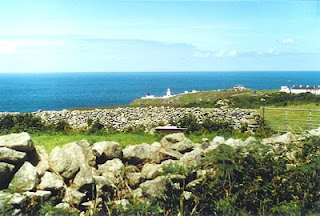 30,000 miles or 2,000 miles of hedging – which would be India and which would be Cornwall? Closed for the collection of salt taxes, or for soil erosion? How about the Chinese Willow Palisade for ginseng and timber taxes?

Cornish hedges predate both the Indian and the unmeasured Chinese Willow Palisade by some thousands of years. It is extraordinary to think that Cornwall was densely populated in prehistory, and their field systems still exist today as evidenced by the stone-faced earth hedge-banks found all over Cornwall.

Cornwall’s prehistoric farmers practised mixed agriculture, while maintaining common land and rough grazing around the fringes of the fields forming a crucial element of this farming landscape. These tiny fields enclosed against the elements cover an estimated 30,000 miles (two thirds of which were built in the Neolithic Age, or the slightly later Bronze and Iron Ages (2,000 – 4,000 years ago).

Hedges in England were altered as the Norman influence took effect, with manorial lands requiring larger field systems, then as the population increased in Medieval times the lands were regulated again through the Enclosure Acts, but now a great many of those replanted Medieval hedges have been grubbed out so that larger fields provide cheaper food for our ever increasing modern population (which recently topped 61 million). 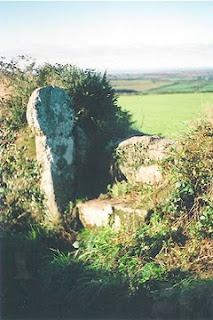 The term “hedge” comes from Old English, German and Dutch signifying ‘enclosure’ as in the name of the Dutch city, The Hague. Hedges are usually boundaries of closely spaced shrubs and trees made up of many species dependent on the countryside, some old boundary hedges may have been existence for many hundreds of years.

The western part of Britain suffered less interference from marauding invaders, while the geology, local climate and style of farming ensured that these hedge boundaries have been left relatively undisturbed. The protective structures provided windbreaks for the stock, the courtyard house settlements, the crops struggling to grow, as well as the prevention of erosion of the valuable topsoil. 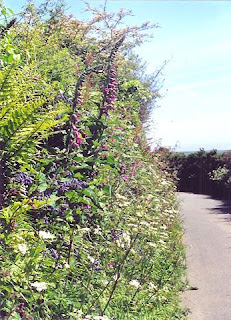 So often we went out for walks as the sun splayed out from the darkened skies soon to jewel the landscape, the soft mist rolling in on the Atlantic winds dusting the hedgerows and grassy fields with dew drops, before the squalls of life enriching rains came over.

When the sun was bright and the sea shone its mix of green and aquamarine with the sky blue above, the hedges colourfully displayed their wares: the early flowering creamy yellow primroses, the white narcissi, the bluebells, the summer bramble flowers, the dog roses, scattered in amongst the natural sedge, the vibrant green ferns unfurling their new leaves through the summer. Autumn comes turning the flowers to berries, or fruits providing more wealth for the briefly sighted or hidden wildlife.

These showed us the tiny wonders of Cornwall, the pockets of wildlife, the hidden gems in the hedges, the sanctuary of protection and life ahead. We heard the constrained buzz of bumble bees collecting nectar inside foxglove flowers, their tall erect spikes adding to the decoration of the already blooming hedge; we saw beetles or the ants crawling amongst the tiny sugary droplets in the celandine or honeysuckle flowers; we watched in amazement the butterflies softly fluttering along the flowery banks. 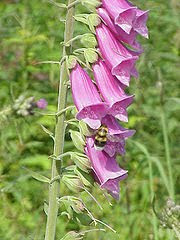 These heirlooms from generations past continue to provide an insight into plantings and habitats that may have been lost elsewhere, reflecting the natural wonders of days long ago: flower meadows, woodland plantings, heath uplands, lichen and moss covered stones left completely untouched for hundreds, if not thousands of years.

An eager bumble bee on a foxglove

These hedges are a natural part of the West Cornwall landscape, where my mother lived and where we have always holidayed, and can be seen to this day in towns and villages, as well as along all the lanes crisscrossing the Cornish peninsula, reminding us as we walked or drove of these bastions of wildlife.

Today these picturesque hedges add to the feel the visitor experiences of the Cornish landscape – the unkempt-looking hedges with their weathered stones and wind-slanted bushes or trees, the tiny valleys full of lush greenery tucked into this land of rocky outcrops, moors and rugged cliffs, all linked with its patchwork of tiny fields. 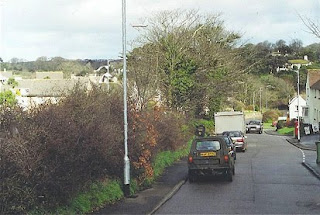 We need to protect these ancient stone hedges, which provide a link to pre-farming history, where native species still abound, supporting the many insects, small mammals, birds and rodents finding a home or foraging in the stony crevices.

A hedge a boundary, an earth bank, a thorny tax line or a willow palisade high above a ten foot trench all manmade over time – history will remember all three, but I know I would rather come across the flowery profusion of a Cornish earth-bank, than the straggly prickly tax collecting hedge in India, or the fast growing willow trees hiding the tax trench beyond, which enclosed huge tracts of land in the centre of China. Let’s hope that the 21st century Cornish preserve these wonderful flowering havens.

Hello! Mr Postman – now it’s September Autumn seems to be calling, more blustery winds and squally showers, though we’re fortunate here in the South East as it has been drier. My mother will love to have this letter, which will bring back memories of blackberrying round the lanes, our walks and times gone by; she will enjoy the photos, as they are so evocative of Cornwall.

I have to credit Cornish Hedges with these photographs and reminders about how important our heritage is – their website is really good = about why Cornish Hedges are Different, and! is well worth a read.

As you know, I love Cornwall and those pictures brought back memories and made me wish I was there again. The names of the flowers are so pretty - heather, honeysuckle, foxglove (I never knew what a foxglove looked like till this post!)

How know that there was so much to know about hedges. What a beautiful are that you have around you. Your photos sure help to make the story. They are lovely.

Hi Daphne - yes I do know that you love Cornwall and thought this story and picture might remind you of the area - it does me too! I decided to put the caption in re the foxglove in case .. what we take for granted, I try and remember others might not know about. They are magnificient flower spikes and have lots of activity around them.

Hi Dan and Deanna - glad you enjoyed it ..these are in Cornwall, not here in Eastbourne .. but I do love them and hanker to go back. We have lovely countryside here in Sussex, but it's 300 miles away - long way in England!

Glad you enjoyed the photos .. they do help make the story, as you say -

It would be a real shame if the hedges were destroyed. Hopefully they will be enjoyed by many more generations to come.

I love the photo of the foxgloves. A friend of mine has some in her garden and each time I see them I'm amazed by their delicateness.

Hi Barbara .. good to see you - I too hope the hedges are repaired properly, which is difficult to get over in this day and age .. each side has to be on separate years, so the wildlife population can re-establish .. no flailing with strimmers!

Thanks for the foxglove thumbs up - they are so pretty I agree .. it's the simple pleasures of life, that we love .. when we take time to look.

Hilary,
What a beautiful post! I loved the pictures, and even though i have never been to Cornwall...your pictures have enticed me enough to plan a trip there soon.
Thank you for showing me such a wonderful piece of heaven.

Hi Zeenat ..great to see you here .. and to know that a visit to Cornwall is up soon! It is a gorgeous part of England .. and these photos are great reminders for me - of a place that's almost home, but not quite.

My mother will be so pleased to hear Cornwall described as 'heaven' .. she loves it so much ..

You have such a rich history in England! Each civilization has left their mark on the land....some quite mysterious.

The history of the hedges was really quite fascinating! Thanks for your interesting post!

Hi Pete .. it is wonderful to see what happened in our little island. It is even more special that it is still there for posterity, as long as we can look after it.

The hedges are interesting too .. glad you enjoyed it - I was amazed to find the information.