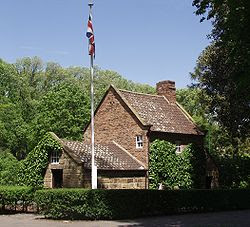 Moving house down under, or moving from England to Wales, or moving only 50 metres – seem to fall into the category of “mad dogs and Englishmen come out in the mid-day sun”. When I was researching where 'my post on nuts with peepholes’ came from recently, I also found out that Joseph Banks, the botanist, had joined Captain Cook in his first great Pacific Voyage. I could not leave Captain Cook out of that post, nor could I this one!

Captain Cook’s parents came from Yorkshire, and had built, in 1755, a cottage in the English village of Great Ayton: whether Captain Cook (1728 – 1779) actually lived there is uncertain, and was probably unlikely, as he was a teenager when he became a British merchant seaman, and joined the Royal Navy the same year the cottage was built.

Earlier last century in 1933 the owner decided to sell the cottage with a condition of sale that the building remain in England – which to me seems an odd clause to have in the contract, but I suppose there was good reason! It would be good to know why and the reason behind it. However, that lady had some foresight, as the cottage was put on the local market obtaining an offer of £300. Hereby hangs the tale – Russell Grimwade, an Australian, offered £800, with the agreement that the clause be changed from “England” to “the Empire”!

So the cottage was deconstructed brick by brick, packed into 253 cases and 40 barrels for shipping to Melbourne. Cuttings from ivy that adorned the house were also taken and planted when the house was re-erected. Grimwade, who was a notable businessman and philanthropist, donated the house to the people of Victoria for the centenary anniversary of the settlement of Melbourne in 1934. 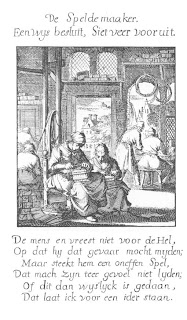 The cottage is now a popular tourist attraction with an English country garden around it, while being part of the Fitzroy Gardens, one of the major Victorian era landscaped gardens in Australia, which add to Melbourne’s claim to being the garden city of Australia.

de speldenmaker: the manufacturer of pins
From the Book of Trades 1694

All our family love gardens and about fifteen years ago my mother and I went for a weekend break in “the Fall” to Wales; it was glorious – lovely sunny days, clear skies, misty autumn leaves, the orange, amber, coppery hues of the trees and shrubs changing their colours as we approached, or giving us their magnificence on the landscape as we drove around. Today she remembered and said it was a very good trip!

Bodnant was the second garden accepted by the National Trust, whereby the Aberconways retained ownership of the Hall. The gardens are situated high above the River Conwy looking westwards towards Snowdon. Around the Hall are terraces with informal lawns shaded by trees, while in the valley below through which a tributary runs is the “Dell” containing the wild garden.

It is in an exquisite place and was absolutely superb when we visited; we were able to walk along the Rose and Lily Terraces, the Canal Terrace, through the Rockery into the Dell, and we could see the 50 metre long tunnel of laburnum, which unfortunately flowers in spring, as do the magnificent azaleas and rhododendrons, so we missed those. 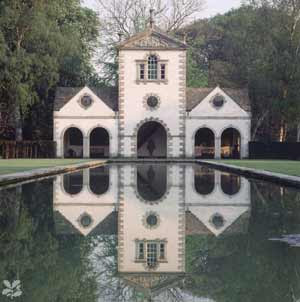 Another house that moved is the Pin Mill, which presides over the Canal Terrace, which was purchased by the 2nd Lord of Aberconway (owner of Bodnant) from the tiny village of Frampton in Gloucestershire. The Pin Mill would have needed lots of water, but Frampton was an ideal location situated between the River Severn and one of its tributaries, the River Frome.
©NTPL / Ian Shaw
The Canal Terrace and the Pin Mill at Bodnant Garden in the spring sunlight.

Why Lord Aberconway decided to move it in 1938 is probably recorded somewhere, but unknown to me. In the early 20th century the Pin Mill was used as a factory for making pins (surprisingly!) before being used by a tanner for storing his hides. The folly, as it is described, is a rather pretty building and makes an excellent focal point at the end of the Canal Terrace with its profusion of water lilies: don’t you think?

The third relocation is the strangest of all and sits up the Downs about three miles away from here in Eastbourne. A man called ‘Mad Jack’ (Jack Fuller) was a wealthy local MP, who had madcap ideas, but who was a colourful, fascinating, eccentric, larger than life, very generous, typical Georgian squire – built some bizarre creations. One of which is a light house called Belle Tout. 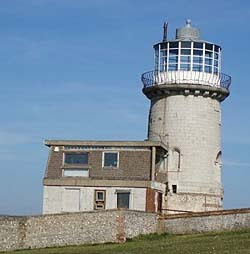 Fuller witnessed a ship foundering under Beachy Head, the stretch of coast near Eastbourne notorious for shipwrecks. He commissioned a wooden lighthouse in 1828; while the building of a proper lighthouse began in 1829. Unfortunately Mad Jack had not taken into account the sea mists and more often than not the lighthouse was shrouded in mist and not able to be seen from sea.
The Little Lighthouse that moved

A new lighthouse was erected at the bottom of the chalk cliffs with Belle Tout being sold off, in 1902, as a small substantial three storey building. Even in the early 1900s it was known that this part of the coast was liable to severe coastal erosion, and the lighthouse was perilously near the edge. The building changed hands a number of times over the years and had been sympathetically restored as far as possible. 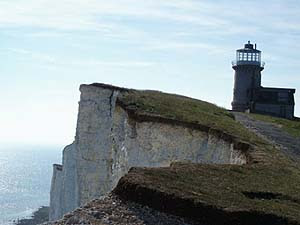 n 1999, after a massive planning operation everything appeared ready for Belle Tout’s monumental move – as the patio was now only ten feet from the edge of the cliff! How does it happen? Simple – it is lifted up onto runners and dragged slowly back away from the cliff, all computer controlled, so there was no disruption – all carefully planned to ensure there should be no heavy digging machinery on site.
From timetravel-britain.com

So necessity caused Mad Jack’s eccentric Belle Tout’s move, a folly purchased changed the location of the Pin Mill, while the house move came about by a philanthropist determined to have a piece of Captain Cook moved down under, even if it was bricks and mortar. All of them seem to be suitably ensconced in their new surroundings – but I have to say the storms and cliff edge movement here along the Downs, probably makes the original statement that Belle Tout had been moved to survive another 75 years somewhat questionable!

Dear Mr Postman – today seems to have been the last of our Indian Summer, the cold north winds are gathering and it’s getting darker in the evenings – I really do not like it that much! I’ll go and join the banksias roses down south .. where spring is coming. My uncle is not very well and things are not quite decided .. so we live in limbo land – time will resolve all.

Hi Hilary
Amazing stories you are telling and the photos are a treat.
Isn't it amazing what people do. The folly seems to be too beautiful for a factory and the book of trades is a fine find.
Thanks for this glimpse in time.
Love Wilma

Hi Wilma - many thanks and I'm so pleased to hear you're enjoying my tales - and the photos seem to add to them .. so thank you.

Yes - I was surprised to find these stories. The pin mill is beautiful and thank goodness it's saved for the future. The Book of Trades was a surprise too - 100 trades!

To move a house from one country to another is something. It is very interesting that they can move these buildings at all. What a great post. Always learn so much when we come visit your blog.

Hope that things get figured out with your uncle.

Hi Dan and Deanna .. I know it's extraordinary - easier in this day and age .. as we know bridges have been moved! eg London Bridge to Mohave County, Arizona. Glad I added another snippet of knowledge for you ..

I'm sure we'll sort things out - and it will all be resolved, at least he's safe in the hospice at the moment until we can come up with the best plan.

Thanks for your support - Hilary Melton-Butcher
Positive Letters Inspirational Stories

Wasn't that Welsh trip the one where you got your money back if it didn't rain or was it just a free umbrella?

Hi Hilary,
It is so amazing to learing about all of these wonderful stories. This reminded me of once a man told me that his mother's house was moved from another town. It is an old house that his grandpa builded with his own two hands for his grandma. So when his grandma die, his mother had the house move to where she is and she moved in there herself.
I think it is very romantic.
Thanks for sharing.
Giovanna Garcia
Imperfect Action is better than no Action

Hi Barbara .. yes it was and 2 plastic ducks, which I think are still in Cornwall! Mum enjoyed the pictures - she'll enjoy them better on the iphone, when I load them! Derek too - I haven't told him about the Book of Trades.

Thanks for visiting - nice to see you commenting.

Hi Gio .. thanks for that. Your story of the daughter's decision to honour her father's hard work and his love for her mother. Fantastic that she was able to move it - and then actually live in it - and keep all those childhood memories of her own, as well as her childrens. It is extremely romantic - and a lovely story - I'm sure there are more .. it's a little like my opera acnd church post titled:

Thanks and it's really interesting you know of another family who experienced a similar relocation.

Hilary, I have a friend in Geelong (an hour+1/2 from Melbourne) who hired someone from the UK to come and work for the Melbourne-based business. The British woman who moves over to Australia is a talented designer. However, she got home sick and moved back to the UK. Apparently, Australia is not appealing to everyone long-term:)

Hi Liara .. having been in South Africa .. it's that culture, tradition, built in homing instinct .. not sure what I'd call it - but I found being away from my "roots" ie my 2,000+ year history .. very difficult to adjust to. I loved Africa and would go there now .. but for culture (as we describe it) I'd be back here .. for new openings, new ideas .. I'd be in Africa ..

so I understand your friend's talented engineer .. in fact my grandfather designed one of your icons .. 1932 it opened .. and he lived in England.

Ma really enjoyed this post as she told B about it when she visited last week and B thought she was confused because she had not read the post.

Hi Barbara .. glad Mum enjoyed it .. I'd talk to her about Cook, she knows Belle Tout, and remembered our holiday at Bodnant ..

Oh - well muddle in the lower orders too then .. no wonder Bella was confused!

Thanks for letting us know a little more about Mum .. and the fact she likes the stories ..

the iphone is a popular addition in her life .. our lives!