Nuts with Peepholes, a name for talking about ... 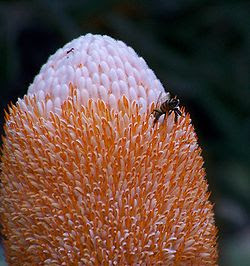 Banks a name to be remembered, as a man who influenced the King and society in the days when exploration, knowledge and an understanding of the earth were beginning to take shape. The world was starting to become smaller, texts could be shared, art could be reproduced, knowledge and philosophy could be debated, new lands were being mapped, new sea routes charted, each and every discovery spurring the curious learned, the intrepid explorer to want to know more.

Sir Joseph Banks, the naturalist and botanist, joined Captain Cook’s first expeditionary voyage (1768 – 1771) on the Endeavour with the prime objective of seeing the transit of Venus on Tahiti (French Polynesia). This joint scientific venture between the Royal Navy and the Royal Society for the Improvement of Natural Knowledge, included scientists, naturalists and artists, whose observations, discoveries and pictorial recordings, together with Cook’s own experience as an explorer, navigator and cartographer made the journey of immense importance. 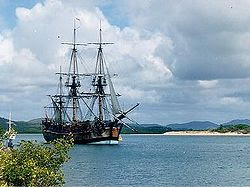 Endeavour replica in Cooktown harbour - just offshore where the original Endeavour was beached for seven weeks in 1770.

Cook had by this time already mapped Newfoundland and this was to be the first of his three great Pacific expeditionary voyages. On their return Cook’s journals were published and he was a hero amongst the scientific community, however Banks became the bigger hero among the general public, as presumably it was easier to understand the plants, the descriptions with the appropriate specimens, while also having the pictorial records than Cook’s concept of the globe with its seas and land outlines.

Banks was a prodigious naturalist and during this first trip, together with botanists from Sweden and Finland, collected over 3,000 specimens. The voyage took them to Brazil, whence bougainvillea was first sighted, round Cape Horn and across to Tahiti to observe the transit of Venus across the sun, and on westwards to New Zealand and the east coast of Australia before returning via Java (Indonesia) and the southern tip of Africa. 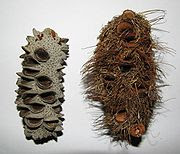 The Endeavour on reaching the Australian eastern seaboard had foundered on the Great Barrier Reef necessitating a seven week lay over for repairs; Banks and his fellow scientists took their opportunity to explore, record, draw and search out specimens to be taken back to Europe. Banks introduced eucalyptus, acacia and mimosa to name a few of the new species to the western world, while approximately 80 species continue to bear his name.

During this period the Banksia genus, in the plant family Proteacae, was discovered. One of these produces the Banksian Nut which appears as a seed pod with peephole apertures – this conversation starter (exactly how I came to find out about it – as my uncle has one on his mantelpiece), proved we were extremely ignorant as to its provenance and I was deputed to find out, especially as the only Banksia I had come across was of the Rosa variety.

The Banksia are mainly endemic to Australia and are recognised by their characteristic flowering spikes with fruiting cones and heads. The large seed pod is quite extraordinary as you can see in the picture. The plants have adapted to the occurrence of bushfires in two ways: the first by the fire stimulating the opening of seed-bearing follicles and the germination of the seed in the ground; the second through sprouting either from lignotubers, or from extremely thick bark that protects the tree allowing it to regrow.

They form an essential role in the food chain of the Australian bush, as heavy producers of nectar for nectariferous fauna, vital for bees when nectar is in short supply, tiny seeds, smaller insects or larvae as food for birds and insects, hiding places for pupation or nesting once the large seed heads have ripened or for regeneration when the time is right.

The reddish brown shrubby wood cannot be put to many uses, as it warps too easily, but is used for ornamental purposes in wood turning; while the seed pods are generally marketed as souvenirs for tourists – how my uncle must have received his – from a visiting god-child - or they are turned into a woodworked object such as the one shown here. 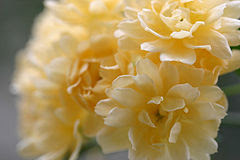 Rosa banksiae, commonly referred to as the Lady Banks' Rose

The Rosa banksia I know from my days in South Africa, herald the start of spring with their flowering profusions of creamy yellow clusters of flowers cascading over walls, along facades of houses, clambering along fences bursting with their pendulous welcome to the spring in the southern hemisphere. In Johannesburg this encouraging plant brought the feeling of warmth to the long dry cold of winter, the hope of mellower days before the burning summer sun beats down and our thoughts turned to the expectation of rain.

William Kerr, a professional gardener and plant hunter, worked at Kew when not travelling, and was instructed by Sir Joseph Banks on his expeditions to China. During one of these exploratory trips deep into China in the early 1800s the white Rosa Banksia, named for Sir Joseph’s wife, was classified, then two further variations were found a richer yellow, and the lovely pale creamy yellow variety that I grew to love in South Africa. It is only since I have returned that I have found and seen these beautiful clambering plants in peoples’ gardens in early summer (including my uncle’s) – and now, here too, they remind me of the warmer days to come: wish I was in the southern hemisphere now!

Thank you Mr Postman for coming by today when I've been a little slow in writing, lots going on and just sometimes letters don't happen! My mother is as bright as ever, always cheerful - how I do not know, but her strength amazes me: she will be interested to see the Banksian nut when I take it up and she can touch and feel it. Aren't we lucky isn't the weather brilliant at the moment - we're having a late summer .. it's not quite time for an Indian Summer yet ..
Hilary Melton-Butcher
Positive Letters Inspirational Stories
Posted by Hilary Melton-Butcher at 11:21

Hi Hilary,
The title "Nuts with peepholes" is very interesting. I have never seen such nuts. Did your mother like this story?
Thanks for sharing.
Giovanna Garcia
Imperfect Action is better than No Action

Hi Gio .. thanks for coming over. Nor had I seen such nuts or seeds. My Mum is in peace mode - she doesn't like much talk, sometimes, sometimes not .. but she would if all things were equal! Probably they are a little complicated for her now - ie too many subjects in one post .. but her brain has not deserted her .. she knew what my ipod was - & I've never used one before up there! You tell me ...

All the best - thanks - Hilary Melton-Butcher
Positive Letters Inspirational Stories

You certainly never cease to amaze your readers with invitations to expand their horizons. Not only do you integrate connections with Australia and Canada in this post, but you point out how plants teach us with their own timeless mysteries.

Hi Liara .. thanks - I struggled to get the post written .. there is so much to their stories - the learning of this world as to how it is now - but what was it really like then?

Yes .. the Banksia nuts are quite extraordinary ..as are the plants that can survive fire - I'm sure there's a name for them .. but I can't remember it - or find it!

Thanks for your comments though .. I appreciate the support and your comprehension of my mix and match ..

We love you mix and match. So many interesting things to learn about. That nut is wonderful.

Good to hear about your mother. Give her a hug from her fans.

Hi Dan and Deanna .. thanks for your comments and glad you enjoy the stories - yes the nut/ seed pod is amazing .. really good to actually see one.

Thanks for your thoughts - Hilary Melton-Butcher
Positive Letters Inspirational Stories

Thank you for the insight on Sir Joseph Banks! The history books here have treated Captain Cook much better.

Those English explorers made some fabulous trips!

Hi Pete .. thanks for visiting .. Captain Cook has been treated well too .. but I was writing about the Banks/ia ... so Cook was the bridesmaid this time!!

The explorers certainly made some amazing trips - my mother liked this one ... and made the comment of course it was all under sail!