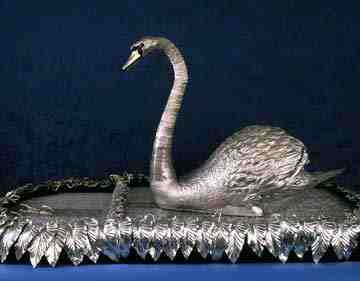 A Silver Swan, glass rods looking like a stream, silver fish and leaves – what a Christmas dining room table centre piece this would be – then a haunting tune magically surrenders itself to the diners.

What bewitchment to see this magnificent music box, one of the first automatons dating from the 18th century. Mark Twain, being fascinated by all things scientific, saw this exhibited at the World’s Fair in Paris in 1867 and included it in his compilation of travel letters “The Innocents Abroad”. 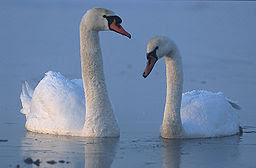 To be described in an Act of Parliament (1773) – the Swan must have made a notable impression – it is thought that there was a waterfall behind it, which was stolen while on tour, as it is described as being 3 feet in diameter and 18 feet high. A very sad loss.

John Bowes purchased the swan in 1872 for his museum in Durham ; to preserve it the music box is only wound once a day. 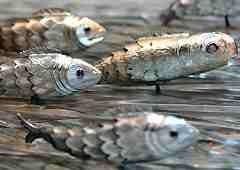 The gentle music plays, the glass rods rotate giving the illusion of flowing water; the swan turns its head from side to side and preens itself. After a few moments the swan notices the swimming fish, bends down to catch and eat one, before returning to its upright position – and the performance, which has lasted all of 40 seconds, is over. What magic though ... even today ... just the wonderment of the silvery musical automaton.
Clever entrepreneurial spirit here ... taking full advantage of the Georgian era in British history (1714 – 1830) ... as it was during this time that the English dictum ‘a man’s home is his refuge’ was coming into fashion, though only the wealthy (for the time being) had privacy ... everyone else was still packed in together on different floors ... poor relatives, to the maids, servants etc ...

... the Georgians were acquisitive for possessions to fill these new spaces – the dining room, the separate bedroom, the drawing room .. exquisite furniture, glorious art, luxurious furnishings along with the sparkling opulence of gold, silver and all things jewel like ... lit by the florescence of wax candles ... all other parts of the cities and towns would be embraced by the full darkness. 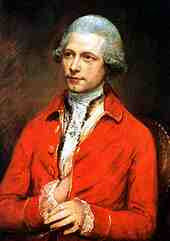 This wonderful centrepiece would have sparkled in the glistening candle light, set on a polished mahogany table, crystal glass, silver cutlery, white linen ... a full feast to follow ... the start of the pleasures we relish today ... while we appreciate the inventors, artists, furniture makers, designers and architects of those days and the legacies and disciplines they have left us to continue exploring and building on. 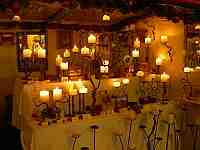 Dear Mr Postman .. I have just watched a mini blizzard descend, been out to feed the birds with some more food, decided my car was iced up .. and I was staying put! The buses have been redirected, as I can see them struggling up the main road .. along with queues of cars.

While I was up at the Nursing Home .. there was a Green Woodpecker voraciously digging around in the lawn .. I haven’t seen one down here .. just magpies, crows, pigeons, blackbirds, robins, little brown jobs! and some tits .. and a fox or two ..

This morning I put some fresh daffodils and red spray chrysanthemums in my mother’s room; and decorated some Christmas twigs, with delightful tree decorations made from straw dusted with glitter, very simple .. but they were in the Samaritans shop and I persuaded them to open early and let me buy them! So a complete change for my Mama ..
This was inspired by a friend of my mother's sending us a card of the Silver Swan from the Museum ..
Hilary Melton-Butcher
Positive Letters Inspirational Stories
Posted by Hilary Melton-Butcher at 17:11

Today's everything mass-produced in China mentality just doesn't come anywhere near what folks were doing over 100 years ago. We live in such a disposible world that there are few things worth keeping or even looking at.

Lee
Tossing It Out

Hi Lee .. too true ... but I laughed knowing the title of your blog "Tossing It Out" - thank goodness they didn't do this .. with this wonderful swan?! Good or excellent workmanship is hard to find now and much appreciated when we come across it. Love the link of the comment & your blog title to this post!! Cheers Hilary

Oh Hilary this is a magnificent piece/peace and just the ticket for seasonal delight, enhanced with the snow storm.

Fascinating, Hilary! What craftsmanship. Imagine the hours it took to put it all together!

Thank you for sharing this interesting discovery - thanks to your mom's friend.

Wow, what stunning detail in the silver swan piece. Beautiful. Sounds as though winter has arrived in your neck of the woods. Stay warm and safe!

Enjoyed this post and the photos, Hilary! :) You are so sweet to share with us.
Have a lovely weekend,
Karen

Some music boxes are like magic. I haven't come across a lot of music boxes, but some of the ones I've seen have been absolutely amazing. I like the old-school, hand-crafted works of art, where music meets magic meets miraculous in action.

You're quite the history buff Hilary. I enjoyed your post. Especially liked the dining room picture since it gave me a visual for a future book, maybe.
Nancy
N. R. Williams, fantasy author

The silver swan music box is magnificent! What a wonder that would be to see and hear in person!

Hi Patricia .. it is just such a wonderful piece of workmanship .. and to be set on a dining table would be magnificent .. I guess the poor diners behind the original waterfall might feel a bit put out - perhaps it should be on a dumb waiter and can be spun round?!

Yes - I'm quite pleased with Mum's simple decorations .. I hope she likes it .. thank goodness I did it before yesterday's and today's snow .. it's just frosty and crunchy outside now.

Thanks Patricia for the round of applause .. much appreciated .. have a wonderful pre-Christmas weekend .. Hilary

Hi Amy - thank you .. I must write to Barbara and let her know she inspired me! She says ..

"I was fascinated with this solid silver 200 year old mechanical Swan. They give a showing each day. It floats above the silver water and catches a silver fish."

As you say the craftsmanship is exquisite .. and so pleased to see everyone is as fascinated as me! A good post ..

Thanks Amy .. have a lovely blessed weekend .. Hilary

Hi Betsy .. I know when I found the pictures of the fishes .. as you say it just shows the detailed work .. I had to put it in.

I thought you'd like the Mark Twain aspect .. and that he'd included it in his travel book - I must get a copy.

It's definitely not the weather for taking literary tours! This is our 2nd brush of a snow covering .. we await the next 'dump' it's travelling eastwards.

Safe and warm are the prerequisites for the weekend .. enjoy yours .. Hilary

Hi Karen .. so pleased that you enjoyed it .. and the pictures enhanced the magnificence of the Silver Swan.

You too - have a peaceful weekend .. Hilary

Absolutely beautiful .. I've always loved music boxes .. treats to behold and to listen to .. but this Silver Swan entices me north - to see it!

Hi Nancy .. thanks - I just love finding things out and putting them into some form of context: so delighted to know you enjoyed it.

The Royal Pavilion is well worth looking at and learning more - it is full of fantastical creatures, brilliant colours and opulence par excellence .. let alone all the hidden passageways & other aspects of the Regent's princely home. The Banqueting Room is a show stopper - certainly people stopper!

Delighted that the post stimulated some authorial thoughts .. and good to see you - Hilary

Hi Talon .. doesn't it .. and like you one day I hope to get north to the museum and to see the Swan in all its glory. Thanks for coming by - have a good weekend .. Hilary

Skilled craftsmanship use to be the norm. We are in awe of it now when we see it. It should be the way we do everything. I love the silver swan and I love that you are making your mom's Christmas season merry.

Have a wonderful Christmas, Hilary. Give your Mom a hug for us.

I know I love fine things - the workmanship is incredible - care and care and respect for their craft, and for their patrons.

Unfortunately there's not a lot we can do .. but be there & take cognisance of the time of year .. and keep ourselves as cheerful and as positive as as we can .. Mum appreciates it though.

You too Teresa - have a great family Christmas .. and I'll definitely give her a big hug from you all .. many thanks - cheers Hilary

Hi Clarissa .. if your 'fully dressed' dining table could take the Swan - I'd be over the pond for a good banquet and all the trimmings with musical interludes, and excellent company. So pleased the Swan is a success with a touch of history .. thanks for coming by - cheers Hilary

I am so fascinated with the silver swan it is a monumental mechanical achievement at its time.

Hi RS .. isn't it amazing! So pleased you enjoyed seeing it and reading about the invention in the late 1700s .. the start of how our life would become .. Thanks so much for being here - good to see you .. Hilary

What an extraordinary piece. And a music box! I just love looking at pieces like this; so much attention paid to detail.

Hi Talli - I do too .. I'm wondering if they've got a video of the 'show' ..because to see it once would be not enough I suspect. I wonder too what tune it will play .. when I visit - I shall find out no doubt.

Good to see you .. enjoy the festive week .. Hilary

Hi Kat .. it is an amazing Silver Sculpture .. and beautiful too .. cheers Hilary

Subtle beauty evokes admiration a the same time as self-appreciation. After all, everything is a mirror of you.

Hi Liara .. thanks - the swan is quite exquisite in its beauty and the workmanship is stunning .. all the best Hilary

I love the silver swan and silver fish. Such beautiful detail.

Once, my father, sister, and I were chased by swans. We decided to go sailing on a nearly windless day. They circled our little boat, which was pretty scary. You had to be there.

Not a nice little chase I guess .. they're quite big birds and quite vicious - and frankly - I'm glad I wasn't there!!

Good to see you today .. and thanks for the fun story .. well not fun at the time! Cheers Hilary