What is a Persian Palette...? Turquoise, Seagreen, Magenta ...

Turquoise, Persian palette, manganese carnations, Spanish-Moorish lustres all hues, colours, and techniques that brightened and enhanced pottery over the last five hundred years. William de Morgan, a great friend of William Morris – the textile designer, were both hugely influential in the Arts and Craft Movement, and both had enormous energy designing, writing, painting, translating, furniture making and more.

De Morgan explored the Persian patterns and medieval designs, experimented with innovative glazes and firing techniques. His designs included dragons, galleons, fish and popular motifs, as well as ‘fantastical’ birds and other animals. He created pictures with his tiles that could be built up to become intricate patterns when placed together.

These Victorians with their insatiable curiosities experimented with all things, testing and developing skills that we see all around us now – their architecture, furniture, textiles, ancient and medieval text translations, stained glass, art and novels. I am sure you will have seen William Morris textile designs still in use today, and very probably been aware of de Morgan’s work through the reproduction of his tiles into greeting cards: this is how we came across him and as is my mother’s wont – please find out more! I see my print-outs are over two years old now! So her interest hasn’t waned. 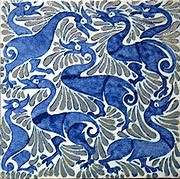 The Arts and Craft Movement sprang from this period (the late 1800s and early1900s) as a reformist movement that influenced architecture, interior design, cabinet making, decorative arts and even the “cottage” garden designs of Gertrude Jekyll that prevailed between the dominant eras of Art Nouveau and Art Deco.
Fantastic ducks on 6-inch tile with lustre highlights, de Morgan - Fulham period

The Arts and Craft Movement was a British, Canadian, Australian and American aesthetic movement inspired by the writings of John Ruskin and a romantic idealisation of a craftsman taking pride in their personal handiwork. Art Nouveau became global, and Art Deco started in Europe, spread to America and then went global with the industrial architectural elements of the period.

William de Morgan’s speciality was as a British potter and tile designer, but he’d started out experimenting with stained glass, ventured into pottery before shifting his interest wholly to ceramics. In 1872 he set up a pottery works in Chelsea, so that he could explore every technical aspect of his craft: this insistent curiosity and inventive streak was encouraged by the arts and crafts ideology he was exposed to, particularly through his friendship with William Morris. 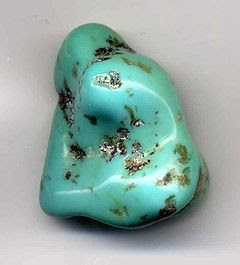 De Morgan became drawn to Eastern tiles with their Indian colours, their richness of design and their depiction of geometric motifs entwined with creatures of the wild. The limited range of oxide colours available in the 17th century did not deter delftware potters from painting exotic flowers, covered by an expensive opaque-white-tin-glaze while the back is simply lead-glazed, which made large numbers available from the potteries of the day in Southwark and Lambeth.
Turquoise pebble, one inch (25 mm) long. This pebble is greenish and therefore low grade

A breakthrough occurred with de Morgan’s rediscovery of the technique ”lustre ware” (characterised by a reflective, metallic surface) known as tin-glazed pottery. This glazing technique had been found in the Mediterranean being practised in Malaga or Majorca, before spreading the knowledge into Sicily and Italy, where it is known as Italian Maiolica, during the Renaissance period in the 14th to 16th centuries. Once Spain conquered Mexico, the tin-glazed maiolica wares came to be reproduced in the Valley of Mexico as early as 1540 and are famously know as ‘Talavera’.
Tin-glazed pottery example - blue and white vase with oak-leaf decor, Florence, 1430 (Louvre Museum) 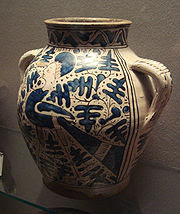 The influences of the East, particularly India, Asia Minor and Persia, permeated de Morgan’s notions of design and colour. The “Persian” palette became his preferred choice: dark blue, turquoise, manganese purple, green, Indian red, and lemon yellow – and he mixed these in what we now know as his unmistakeable style, in which fantastic creatures are entwined with rhythmic geometric motifs float under luminous glazes.

His works inspire me as they are so attractive and so imaginative that today we can see some of these non mythological creatures for real .. I found these geckos and was inspired enough to save the pictures, which seem to resonate with the colours of the “Persian” palette – the Smith’s Green Eyed Gecko from Asia, which seems turquoise to me and fairly or otherwise has multiplied across the net as National Geographic wallpaper - but it's copyrighted, so I'd better leave it - sorry! 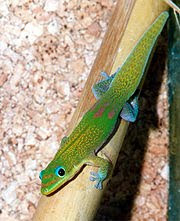 Or how about the Gold Dust Day Gecko (left) found in Madagascar... or even better these incredible reptilian eyes (above) – where are they from and to whom do they belong – other than once again National Geographic and some amazing photographer - I cannot trace.

The de Morgan centre has an amazing collection but I see the Museum itself is closed for relocation – but we can still see some incredible tiles, tile panels and other work – I recommend scrolling down the first page of the Centre here to see a galleon representation and on the page here as above the dragon tile – but truer to its roots at the Museum.

I see that de Morgan did a lot of work for the Pacific and Orient Shipping Line in their heyday ... think about the luxuriousness of travelling the seas in those days with these kinds of tiles just as decoration on the walls!

Persian Palette – I rather fancy that description for a range of colours .. turquoise, sea green, Tyrian purple, Arabian red, ochre yellows .. my mind races on to tapestries new ...

Dear Mr Postman – thank you for delivering this – my mother when she’s awake is very interested and involved, other times she sleeps; my neighbour is improving. Our minds are occupied by the torrential rains we’ve had – and the damage it has done to homes and infrastructure, let alone one poor family, whose policeman father was swept away when a bridge collapsed. More rain and sea surges are forecast let’s hope more disaster is averted by the powers that be.

The gecko is a magical creature. He invites you to reconnect with the mystic inside yourself.

Hi Liara .. yes - I wanted to write more about the gecko .. but for a change decided to stick with my first thoughts the de Morgan tiles and their avant garde approach to design over 100 years ago.

I'll now some time soon do a story on the gecko and dragons of life ..

OH, these photos once again are magnificent.
Sometimes I do not envy an artist, how to do justice to nature with your own art?
You can see I am not an artist.
Grat to hear all is as well in your world as can be expected.
As always love to you and your mother, Wilma

The Persian palette seems to bring us back to the 'mysterious', without which, life would be boring and without awe. :)

These things are so lovely. Thank you for sharing them with us. It is good to learn more about these things and the people that created them for us to enjoy.

Sorry to hear about the policeman that lost his life trying to help others. Good luck with all the rain. Stay safe.

Hi Wilma ..thanks - aren't the colours wonderful. de Morgan though definitely made some beautiful art - the tile panels are really well worth looking at: he inspired me to write the post!

Yes - we're ok and ticking on .. many thanks for asking and for your love to us - we appreciate it .. Hilary

Hi Jocelyn .. how right you are .. nature always amazes us and our ability to create something as a form of art using our imagination and using or creating new techniques ..

Thank you - I love the mystery and awe -
Hilary

Hi Deanna and Dan - Thank you and I'm glad you enjoyed the information. Yes - the weather in the north is terrible - losing a life unnecessarily in an accident caused by nature is truly sad and all of us feel for his family.

Thank you - we're safe here in the south I sincerely hope. - Hilary

Gracious, I don't have anything nearly as intelligent to say as your original post, which was phenomenally written, or the comments, so I'll just say that I love learning. This post taught me something I hadn't known previously, and I loved it.

I've also always been a fan of the architectural arts & crafts movement, so it was nice to understand a bit more about its origins.

Hi Megan .. well in that case - so pleased that you're here learning .. and just enjoying the colours/pictures and information.

Good to see you here - thanks for coming over
We're well and safe - thank you with the gales blowing around ...just hope things don't get worse for others up north ..

Very interesting post. My son Dylan is very into dragons and lizard etc. I am going to show him the pictures. I think he will really like this.
Thanks for sharing.
Giovanna Garcia
Imperfect Action is better than No Action

I didn't realize that the gecko can be a mystical creature??!! The colors indeed have a very ancient feel to them. They certainly embody wealth, magic and boldness!

Hi Gio .. good to see you - and I see Dylan has changed his allegiances .. how is Jeffery the giraffe? I hope he'll enjoy the photos.
Thanks for visiting -
Hilary Melton-Butcher
Positive Letters Inspirational Stories

Hi Evelyn - me too I didn't realise the gecko can be a mystical creature .. I'll have a look and see what I can find. The colours are wonderful aren't they .. and as you rightly say embody wealth, magic and boldness. I think the Persian palette will become one of my favourite phrases!
Good to see you here -
Hilary Melton-Butcher
Positive Letters Inspirational Stories

Where would our world be without color! I'm grateful for your stories as we head into our Thanksgiving holiday!

Hi Tess .. grey and white would be pretty dull to live in .. it's great occasionally, but the colours of nature are exquisite. So pleased that my stories cheer you .. I'm a week out - I thought Thanksgiving was last week .. oh well - my brains need to kick in! - it must be the amount of rain we've had ..?!

Enjoy Thanksgiving and enjoy giving out Peanut butter and jam sandwiches on Friday - you'll be an angel for the day .. and will be truly appreciated by those with practically nothing.

The world will be brighter for you Tess -
Thank you - we colour others' lives ..
Hilary Melton-Butcher
Positive Letters Inspirational Stories

I do so hope you compile the best of these Letters into a book someday. What a vast range of interest and knowledge you share with the world. You're our google!

Hi Janice - THANK YOU! My plan is definitely to 'do' something with them .. and I have lots of thoughts .. so the thought process is there - the action plan will come.

But thank you for that comment - "your google" - that's a great honour .. enjoy the weekend - Palm Sunday tomorrow, and clocks going forward tonight .. Hilary