A Judge, Gardens and a Great Stink .. 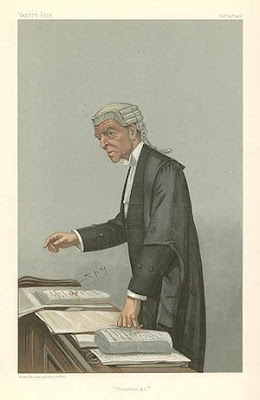 A letter from Judge Simon Brown, QC to The Times .. that sounds interesting .. my father was a barrister (QC = Queen's Counsel) and a member of the Inner Temple - so my mother was particularly interested in this post ... we also laughed as my god-daughter's brother is called Simon Brown (13) and we decided that they weren't the same!

Judge Brown is the Master of the Garden of the Inner Temple and wrote (I have paraphrased it - to make it simpler, not necessarily clearer!): The letter is titled "Garden that acts a filter for London traffic fumes" and begins .. "Sir ..


Trees are the lungs of our environment. It is vital to have not only good forests in the countryside but also ample trees in the hearts of cities where our motor vehicles still rule the roads.

In the mid-19th century the ancient Inner Temple Gardens in the City of London besides the Thames became blighted by the new gasworks nearby at Blackfriars and other factories on the south bank of the River. Charles Dickens memorably wrote of the consequent prevailing fog and sooty atmosphere in Bleak House. Samuel Broome (1806 -70), the Inner Temple gardener, was required to find a means of dealing with this engulfing environmental disaster.


His answer was to plant plane trees as they filtered the air. This enabled his plants to flourish to show standards. Chrysanthemum show were held regularly in the gardens every October and November between 1854 and the end of the century. During this time the public were allowed free entrance, with the gates remaining open until dusk every day from June onwards. The Gardener's Chronicle of that time recorded up to 8,000 people visiting daily at the height of smoggy times in the summer.


John Newton, Broome's successor, planted 20 plane trees in his memorial directly on top of the newly constructed embankment housing the new railway and the sewage system by Bazalgette as part of the attempt by parliament to solve the blights of the traffic problem at Charing Cross and the Strand, and the "Great Stink" of the Thames.


It is an irony that while the original environmental problems were conquered by determined government action, as well as by the trees, these memorial trees now serve to filter the traffic fumes emanating from the motor vehicles on the Embankment. The Garden continues to be beneficial to offices workers .. offering a place to picnic or sit on the spacious green lawns among the trees.

While environmental problems will always exist, we must continue to rely upon the virtues of the gardeners of "Diligence, Patience and Perseverance", as Broome would say, as well as their natural environmental empathy, to overcome them."


It is interesting this .. as we have a lot of parks in London - a great many used to be part of Henry VIII's palace grounds and are rather large - St James Park, Hyde Park, Regent's Park, Richmond Park, Greenwich .. to name a few!!! I hadn't realised that the embankment was built at this time .. another post looming!! .. I did mention the Great Stink and Bazalgette in my post on Obama's Beast of a car ...


There are so many points of interest in this post .. developments of Gardens as breathing treasures, plant shows, the state of London during the industrial era of the 1800s .. and the stinking Thames before it was cleaned up in recent years .. I remember the pea soupers back in the 1950s and 60s .. horrible, cloying fogs .. and if Londoners had to put up with that in the summer months too .. no wonder they were so grateful for the Inner Temple Gardens!

Dear Mr Postman thank you for calling in today, and I am pleased to tell you that all is well - my mother had the operation and she has recovered and seems to be doing well - long may it last ... she loves letters, so will be happy to receive this once I can read to her again ..

PS - An article from Wikipedia on the Great Stink - highlighted as their article of the day:
https://en.wikipedia.org/wiki/Great_Stink   it just adds a great deal more to my post here.  Added 23rd June 2015.

This is lovely! I really found the part about gardens interesting. Thank you for sharing this. I hope you have a really great weekend.

Hi Dani .. thanks .. someone else's letter .. but Mum certainly found it as interesting as I did .. and it was really informative - leading to lots of other ideas.

Thanks - you too have a good weekend ..
Hilary Melton-Butcher
Positive Letters

"Trees are the lungs of our environment" sounds so right. You're increasing my inspiration for creating a little indoor garden of my own!

Hi Daphne .. thanks for the comment .. yes trees do breathe for us .. so we should protect them ..

How about an indoor garden in a bottle .. ?

Lovely post. Reminded me Hyde Park in downtown London. Full of green. The park was beautiful in morning Sun light.

Hi Shaw .. glad you liked the post .. yes Hyde Park is a pretty wonderful space in the middle of London .. as are all the large parks in the middle of the cities. The realisation in the 1800s that they benefited air quality must have impressed the planners of the time, or the forward thinkers -fortunately we had lots of these both here and in the States.

The Inner Temple Garden is a lovely tranquil setting amongst the hurly burly of central London.

Hilary, what a wonderful post. Thank you for the great description of these things it makes them come to life.

Daphne, a fish tank makes for a lovely way to grow and indoor garden. You just need a grow light on the top of it. If you choose fresh vegies or flowers.
Dan and Deanna "Marketing Unscrambled"

Hi Dan and Deanna .. thanks very much .. mostly stimulated by the Judge himself - even if he's not my honorary god-son, Simon Brown!

Guess what a post is going to be about shortly .. except with a different take on the indoor garden ..

Thanks for your advice and thoughts
Hilary Melton-Butcher
Positive Letters

Gardens are such uplifting, spiritual places. In some countries, cemeteries are also gardens, places of peace, tranquility and reconnection. Your posts are educational, witty and fun. A reader might like to hop into an image of a lush, British garden, much like children do in fairytales. Some people do this for real...

Hi Liara .. Gardens are wonderful .. and cemeteries too have wonderful spaces .. particularly Highgate in London; and places of rest as open spaces with memorial trees; I love them ..

Thanks so much for the comments - I really appreciate them .. I now need to release my soul to embrace the whole endeavour.

As a child I spent hours reading fairy tales .. we must have had most of the books at home .. devouring all the stories and losing myself in the wonderful illustrations ..