The Speaker, the start of Parliament ... and free speech part 2/2 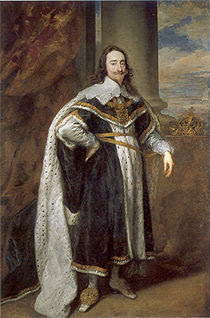 There have been a couple of other interesting historical aspects regarding previous holders of the office of Speaker: In the 1600s the Speaker of the House was still appointed by the Crown, with Charles 1 appointing William Lenthall, who was described as ‘of a very timorous nature’ ... and treated with little respect ... however in 1642 he showed his true mettle, and who he considered his true masters were:
King Charles I entered the House of Commons to seize five Members of Parliament, whom he considered to be disruptive Members and, having taken the Speaker’s Chair himself, turned to Lenthall and demanded of him whether any of the Members he wished to arrest were in the House.
King Charles 1 - Portrait by Anthony van Dyck 1636 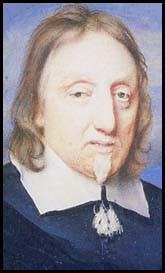 Lenthall behaving with great prudence and dignity fell on his knees and replied:
“May it please your Majesty, I have neither the eyes to see, nor the tongue to
speak in this place, but as the House is pleased to direct me, whose servant I
am here.”

Lenthall during his parliamentary life of 20 years (despite those early misgivings) displayed a great deal of fortitude and ability to vary his roles, change allegiances, yet retain his position, and regain it when it was seemingly lost forever.
William Lenthall in 1652 - he looks careworn doesn't he? I included this picture .. as it shows his dress, and his goatee presumably the fashion of the day .. (another interesting fact is that Anthony van Dyck, who painted the portrait of King Charles 1 above .. is used as the example of a goatee beard!)

This is the era of the Civil War when Charles 1 was beheaded, Oliver Cromwell and Parliament ruled, subsequently the monarchy was restored when Charles 11 became King in 1660 and parliamentary life in England was never quite the same. This era has been described as the 'Commonwealth of England ruled by a republican government' during the years 1649 – 1660.
Betty Boothroyd, became known as ‘Madam Speaker’ during her tenure 1992 - 2000... in an earlier life she had been a member of the Tiller Girls, a dance troupe. Baroness Boothroyd soon left the Tiller Girls entering politics and had two years in Washington D.C. witnessing the Kennedy campaign and subsequently working as a legislative assistant to Republican Congressman, Silvio Conte, between 1960 and 1962. 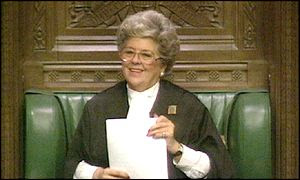 She gained ‘celebrity status’, breaking with over seven centuries of tradition, as the first elected woman Speaker, with her no-nonsense approach to style and substance. When the proceedings of the Commons were first broadcast in 1975 the Speaker of the day George Thomas was heard to cry “Order! Order!” to quell the murmurings of the members of Parliament. Madam Speaker instead of saying “Order! Order!” liked to bring proceedings to a halt with the brisk announcement, “Right!, time’s up” – true to her northern roots.

The Crowned Portcullis: the House of Commons logo -
the House of Commons has green leather benches, as is the Speaker's chair, seen above
She won a place in history as a holder of that coveted position “the Speaker”, and who has been one of the most successful upholders of standards in the Commons and has been known for her impartiality, toughness, sharp tongue and wit. Let’s hope that the next Speaker appointed brings these qualities back and we can regain some of the honour and belief in our parliamentary system that in recent years with Speaker Martin have been lost.
To continue on with the theme on freedom to speak .. Speakers’ Corner in Hyde Park, London has become a traditional site for public speeches and debate as well as the main site of protest and assembly in Britain.
Public riots broke out in the Park in 1855 in protest over the Sunday Trading Bill which forbade buying and selling on a Sunday, the only day working people had off. The riots were described by Karl Marx as the beginning of the English revolution.
Hyde Park in the 1800s and 1900s continued to be the point of assembly for workers’ protests establishing free speech for most working class men in 1867, and these riots and agitation for democratic reform encouraged some to force issue of the "right to speak" in Hyde Park.
Nowadays, many of its regular speakers are non-mainstream, Speakers' Corner was frequented by Karl Marx, Vladimir Lenin, George Orwell, and William Morris (textile designer - as well as socialist). Its existence is frequently upheld as a demonstration of free speech, as anyone can turn up unannounced (with their soap box) and talk on almost any subject, though they are likely to be heckled by regulars and the crowd.
That was a very brief tour covering some of the aspects showing how we got to where we are now relative to the start of our parliamentary system and freedom of speech; explaining Magna Carta and its “Great Charter of Freedoms”, of the development of Parliament, the right of the people over the Crown starting to be established, the part the printing press played in the opening up of the free press, the rights of workers being upheld, and on to today whereby the Speaker of Parliament is expected to be impartial and allow our elected representatives to express our views, though we may still have free speech and express our personal views at Speakers’ Corner, if we so wish ....
Thank you Mr Postman .. I expect my mother will laugh with me and remember Betty Boothroyd and her cry "Right! time's up"; as you say - it is quite an interesting "fly by .." on a tiny part of our history .. reminding us of how far we've come ... especially in these recent years .. til tomorrow then ..
She loves these stories and hearing some recent stimulating news for her to be able to take in; In July she remembered that I had written about the Speaker .. so you tell me what is wrong with her brain?! She does continually amaze the staff and I ..
Hilary Melton-Butcher
Positive Letters Inspirational Stories
Posted by Hilary Melton-Butcher at 08:26

I've noticed that in Bermuda the parliamentary chairs are that same green, hopefully to promote happy growth in relations among people everywhere.

Accord can be had. Government, as any entity, is only as good as the hearts of the men and women running it. Luckily, we all can make great change starting with ourselves.

Hi Jannie - thanks for visiting .. yes - you're right Bermuda is a British Protectorate under the Monarchy and governed by a Governor appointed from London.

I don't why they're green - in the House of Lords they're red.

Accord can be had .. and bad governance of any sort is really bad for the peoples .. as you say we can all improve ourselves individually.

Thanks for your interesting comment .. I've never been to Bermuda .. it's always looked so beautiful = one day!

Interesting series on the House of Commons! William Lenthall apparently was a real survivor...since Speaker of the House can be such a fleeting position.

First Madam Speaker: Betty Boothroyd, that is way cool. I am always interested in learn first woman...
Thanks for sharing.
Giovanna Garcia
Imperfect Action is better than No Action

Hi Pete .. glad you enjoyed the brief notes on the House of Commons. Yes - Lenthall was obviously one of those men that hung on .. whatever the obstacles = he was a survivor.

Hi Gio ..thanks for your comments = yes a first - and she was pretty impressive in her position as Speaker .. a good leader. She will be remembered in history - not just because she was a woman, but because she had determination and integrity.