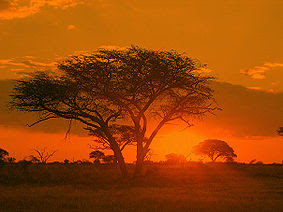 Dear Mr Postman .. thank you for holding another letter for us ... Mum and I can chat happily about Zimbabwe and the days gone by .. she was able to visit a few times .. as her younger brother had a tobacco farm out there .. sadly he was killed by terrorists in 1976 - for being in the wrong place at the wrong time on his farm - he didn't usually go out to that part of the lands in the middle of the day - difficult times for her .. she's been through a lot .. however she doesn't dwell and even now remains positive - I don't bring negative into my conversations .. I always look on the bright side with her ..

To continue our elephant saga and an eye opening fun tale .. we were very lucky that another car drove along, as there's a curfew for being out late in Game Parks; they stopped, we hooked up to their little white van .. and off we set: only to encounter a herd of elephant near the road .. so we stopped .. the kids and I weren't at all happy - we'd been through this once before .. but not attached to another vehicle with no mobility of our own! The couple and their friend in the white van were having a right old time .. laughing away with the van rocking on its axles .. and I definitely was getting a whiter shade of white. Fortunately the elephants decided we weren't a threat and we carried on our way .. 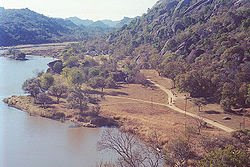 .. through the Park Gates and on to Bulawayo .. now we were on the tarred road and could bowl along quite happily .. not many feet from the white van in front. Near the outskirts of Bulawayo we saw a police car .. the white van waved happily to him, they obviously knew him socially .. and he was waving back, then started to wave more frantically at us - telling us to stop!! Well you can imagine we couldn't do much except watch in slow motion as we went by. 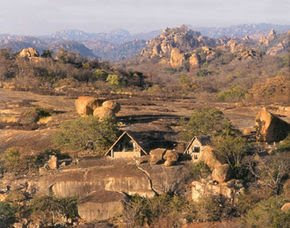 We weren't travelling that fast .. the white van wasn't very powerful, had three fairly heavy people in it and was towing us lot in a BMW behind (I know not a proper vehicle for the Okavango .. the land rover had broken down in Johannesburg .. and we'd come up in the BMW, Mike had gone a separate route .. and I'd been fortunate enough to experience the safari journey through the Okavango Delta in one of the other 4 wheel drive vehicles .. brilliant trip). Back to the BMW .. this poor policeman frantically waving us down, kept his arm motion going faster and faster .. then sort of realised that it wasn't working and as we passed him, we could see his eyes open wider and wider in shock that we were ignoring him .. and I'm sure if we could have seen his face properly .. his jaw was rapidly descending to the ground in open mouthed objection .. what did those South Africans think they were doing ignoring him?! I guess - he found out later on the full story .. we safely made it back to Johannesburg, after getting a mechanic to sort us out.
I hardly saw any snakes during my time in Africa... probably a good thing, as I'm not that keen on them .. though they are incredible animals and are absolutely beautiful .. I'd been put off as a kid .. tales of adders, grass snakes another day. I did encounter an African Rock Python one day on a gravel road in a Game Reserve in Natal .. it was just lying there warming itself .. and eventually slithered away = that's the closest I got ..
This recent story appearing in the Independent Newspaper .. which perhaps you've seen amused me and I'm sure will my mother .. though I'm sure Ben Nyaumbe wasn't so happy about it .. Man Bites Python in Kenya:
A Kenyan man bit a python who wrapped him in its coils and hauled him up a tree in a struggle that lasted hours, local media said today.
Farm manager Ben Nyaumbe was working at the weekend when the serpent, apparently hunting for livestock, struck in the Malindi area of Kenya's Indian Ocean coast.
"I stepped on a spongy thing on the ground and suddenly my leg was entangled with the body of a huge python," he told the Daily Nation newspaper.
When the snake coiled itself round his upper body, Nyaumbe resorted to desperate measures: "I had to bite it."
The python dragged him up a tree, but when it eased its grip, Nyaumbe said he was able to take a mobile phone out of his pocket and phone for help.
When his supervisor came with a policeman, Nyaumbe smothered the snake's head with his shirt, while the rescuers tied it with a rope and pulled.
"We both came down, landing with a thud," said Nyaumbe, who survived with damaged lips and bruising.
The snake escaped from the three sacks it was bundled into.

This story just amazes me for a couple of reasons - to think that a python could drag a man up into a tree - that thought just makes my brain coil in horror .. especially as it'd probably be a thorn tree (acacia) .. and then the fact that Nyaumbe had a mobile phone (and it worked) .. and was able to use it .. where has this world got to today .. well it certainly provided Mr Nyaumbe with a life line!! After that little episode I think the snake deserved to escape .. so it could tell its story to the snake world?!
Thank you Mr Postman for holding our stories .. I know my mother will love these memories and I can describe the pictures to her (as she can't read properly - due to left sided neglect) and we can remember the dirt and earth smell of Africa, as well as all the other wonderful sights and emotions of Africa's pull ..
Hilary Melton-Butcher
Positive Letters
Posted by Hilary Melton-Butcher at 14:35

Very interesting stories! Your elephant story was an experience of a lifetime!

The snake story was quite fascinating as the man survived! Obviously, the snake will not mistake humans as an easy prey anymore!

Wow, great stories about the elephants and the pythons! I don't think I've had such hair-raising adventures in my life, ever! My 'dangers' are tame in comparison.

Hi Pete .. glad you like the stories .. - yes: we forget that wild animals need our respect!! I was so fascinated by the python story .. at least it got away ..

Thanks and see you later!
Hilary Melton-Butcher
Positive Letters

Hi Daphne .. so pleased you enoyed the stories .. the African bush is just wonderful . and the adventures one can encounter are always somewhat surprising ..

Many thanks for having your hair raised!!

Nice article on nature and wild lives. One of the places which I have not visited is Africa. I hope one day I could visit there. Your article and pictures gave me good imagination and relaxation after hours.

Hi Shaw ..thanks for commenting and glad you like the African bush and the animals. It's a glorious place to visit .. but you've been to so many other wonderful places.

So pleased to hear that you were able to take a little time out and dream of Africa and have a little break from the norms of life with this post.