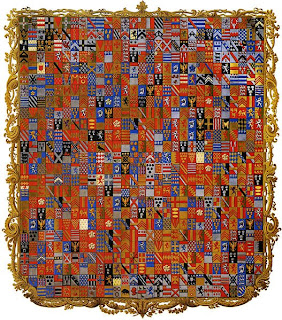 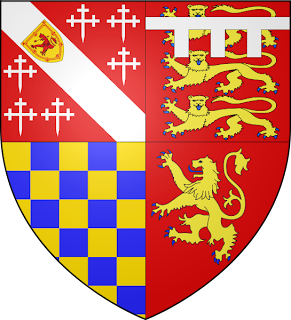 Dear Mr Postman .. it is good to see you back and it will be wonderful how all these parts of the coat of arms can make a "floral garden" .. and we can see history develop over the years ..


We've been reminded that most people couldn't read or write a 1,000years ago, the surname hadn't evolved and that the permanency of settlements was only just beginning .. the Black Death in 1347 wiped out a large number of villages; fishing villages probably remained stable, while new villages - eg pit villages would have grown up where new developments occurred; or in medieval times based around the palaces, castles and manors of the nobility and wealthy merchants.
The combination of pictorial emblems symbolic to that area of military allegiance or sovereignty, geometric shapes and colours served as an identification of the bearer, and as the entitlement of inheritance was introduced in the early 1100s this necessitated that some form of 'rule' was established and in 1483, under Richard III, the Herald's College was chartered. It's purpose is to assign new coats of arms and to trace lineages to determine heraldic rights and priveleges. It has also collected and combined the rule of blazonry into a system.
In my first post on Heraldry the Coat of Arms of Garter Principal, held by the senior Officer of Arms, shows - the chief blue band at the top of the shield contains the Order of the Garter surrounding the Crown, to its right is the lion of England, to the left the Fleur de Lys of France, and the Sovereign's crown; while the most important part of the shield is Argent (white) with a Gules (red) English cross on it.
The magnificent coat of arms above is held by the Duke of Norfolk - and shows his fiefdom .. ie the four parts to his land: 1st quarter - upper right the Duke of Norfolk arms with the white bend, superimposed with the demi lion rampant, with an arrow through its mouth - reflecting his title as the first Howard; 2nd quarter shows the three gold lions (with a three point label - argent) -reflecting his entitlement to the Brotherton name; 3rd checkered quarter shows his entitlement to the earldom of Surrey (Warenne .. a norman name of ennoblement encompassed within English history); the 4th quarter of a full lion rampant shows his entitledment to the FitzAlan lands. The Duke of Norfolk is the Premier Duke in the peerage of England and also, as Earl of Arundel, the Premier Earl. The Duke of Norfolk is, moreover, the Earl Marshal and Hereditary Marshal of England.
The art of heraldry dazzles and delights, with stunning colours, crests in gold and green, brilliant and exotic birds, exquisitely rendered borders of dog rose or fleur de lys, fields of wheat sheaves with unicorns or deer amongst the trees; its menagerie of creatures, real or fanciful, its symbols and sometimes bizarre choice of charges (an object or a figure used in the coat of arms) cannot fail to inspire admiration and bemusement.
Animals such as bears, bees, camels, eagles, Griffin (part eagle, part lion), lions, unicorns, snakes; - symbols such as crescents, moons, star shapes, suns, towers or castles, crowns; - common design features include chevrons, chief (broad stripe across the top of a shield), ermine (a white fur pattern), bend (a diagonal stripe); - other geometric designs .. including hatchings - all add to the possibilities of this incredible system of heraldry.
Other important design details - besides the simple fields of colour - are the quarterings of the shields ... so each part of a nobles' entitlement is easily identifiable. Over time these can be marshalled so that the whole family's armorial bearings are correctly arranged. One of the most magnificient of these is the Grenville Diptych containing 719 quarterings ... for more information see the Marshalling section under the Heraldry section of Wikipedia.
Mr Postman - you have surpassed yourself with telling us about this floral kingdom of history .. it is an involved process .. but we have learnt a lot .. and my mother has certainly enjoyed it - we've looked at the shields quite closely.
Hilary Melton-Butcher
Positive Letters
Posted by Hilary Melton-Butcher at 11:13

Thank you for your intresting post. I always wonder why these old time military stuff is beautiful. They are colorful and shines to the extent that I feel same feeling watching fine arts.

Thank you for your article.
Shaw Funami
Fill the Missing Link

Hi Shaw .. I'm pleased you liked the historical aspect - and one of the things England has developed is the art of conservation of our incredible antiquities.

Perhaps we gloss over the standards, shields, arms etc .. as there are 'so many' .. but looked at individually they draw you in with their magnificence.

British history is amazing .. as I'm sure do other countries - but our pomp and circumstance through our Sovereign keeps it at the forefront.

Thanks for joining with me in its celebration

Hi Dan & Deanna ..thanks for commenting on our beautiful history .. it's actually so interesting for me too .. I learn so much.

Thank you for the wonderful information on heraldry! It was such an informative and enlightening series.

The information was excellent!

Hi Pete .. I'm really glad you appreciated the four parts .. I have to say I hadn't realised there was so much .. and am so pleased that you found the posts informative and enlightening.

Many thanks .. plenty more to Heraldry!!