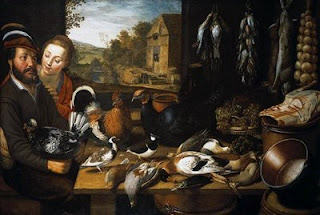 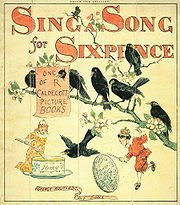 Dear Mr Postman .. how nice to see you again .. are you saying that today's letter has a link with yesterday's .. but with a twist .. oh! alright .. we will enjoy reading ..

Our English culture is so amazing .. now-a-days fortunately some of the customs have disappeared in to the mists of time .. such as

Sing a song of sixpence, A pocket full of rye;
Four and twenty blackbirds baked in a pie!
When the pie was opened the birds began to sing,
Oh wasn't that a dainty dish to set before the king?

A cook would skylark around and produce a pie with live birds inside a huge pastry crust to the wealthy medieval knight to amuse his guests, and then bring in a real pie once the birds had been released ...

Larks until fairly recently in Europe were shot, or caught in nets, and eaten as a delicacy .. and in fact in England were sent to Leadenhall Market in sack loads in the late 1800s .. per a reference by Roy Booth: & to a recipe for lark pie by Elizabeth Grey - the Countess of Kent - 1687 ... it starts ...

Take three dozen of Larks, season them with Nutmegs, and half an ounce of Pepper, a quarter of an ounce of mace beaten, then take the Lumber pye-meat [I think she means loin], and fill their bellies, if you will; if not, take half a pound of suet, and one pound of Mutton minced, half a pound of Raisins of the Sun, and six Apples minced all together very small, then season it with a Nutmeg, pepper and salt, and one spoonful of sweet Herbs, and a Lemon peel minced, one penny loaf grated, a quarter of a pint of Cream, two or three spoonfuls of Rose-water, three spoonfuls of Sugar, one or two spoonfuls of Verjuice (unripe grape juice); then make this in boles (balls), and put it in their bellies, and put your Larks in your Pie ......

Other birds were hunted to extinction - cranes an ancient British bird had been wiped out by the 1600s .. as dozens of them had been the lavish centre piece of medieval banquets ... or included in the great theatrical show of cooking a bird within another bird .. tiny larks last, blackbird or thrush, hens, partridge, cranes ... = a meal fit for a king.

Cranes have returned to England and are being protected to ensure their population growth, skylarks are being protected by the farmers setting aside rough areas of farmland for them to breed - as they are ground breeders, blackbirds are still fairly common throughout their habitat - Africa to Scandinavia and northern Europe ... although the rise in the magpie population is taking its toll on smaller birds .. blackbirds, robins, wrens etc

Thank you Mr Postman .. that was very interesting and I'm pleased we are learning to protect and reintroduce our natural world again ... is there a link for tomorrow - heraldry .. oh good .. we look forward to seeing you then ..

PS: Thank you Giovanna for suggesting I add in the Beatles' 'Blackbird' track sung by Sarah McLachlan.

Posted by Hilary Melton-Butcher at 15:49

Very interesting post on English history! The information on the birds was enlightening!

We soon forget how our ancestors obtained food. Althought, it is so easy to make or buy a chicken pot pie today.

Do you know the song Blackbird Fly - by Beatles.
http://tinyurl.com/c6e7a4 this one is sing by Sarah Mclachlan.

You blog just remimded me of this song.
Giovanna Garcia
Imperfect Action is better than No Action

Hi Pete .. thanks for visiting .. yes - life was very different not so long ago ..

It is easy to make or buy chicken dishes today .. but are we doing today's birds any favours??

Good to hear from you

Blackbird singing in the dead of night,
Take these broken wings and learn to fly
All your life,
You were only waiting for this moment to arise.

I've added a PS to the post .. so people can click on to hear the song - thanks for letting me have the URL ..

Hilary, Your post reminded me that there are so many Hens and Roosters in my Grandma home. In the morning they tell us time to get up and eggs for all family to eat.

Nice post.
Thank you for your sharing.
Shaw Funami
Fill the Missing Link

Hi Shaw .. thanks for visiting .. family remembrances are so wonderful & yes we had hens too .. and eggs to eat .. delicious.

Hilary, It is good to know where some of these things came from. It was a lot harder back then for some to keep food on the table. Birds are all around that might be why the birds took such a big hit. Everyone after them. Thank you for the good post. Thank you to the post man as well for bringing the letters.
Dan and Deanna "Marketing Unscrambled"

Hi Dan and Deanna .. thanks for visiting - it is quite extraordinary how much has changed over the last few hundred years.

Yes the postman is kind to visit all the time!