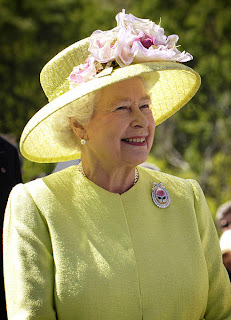 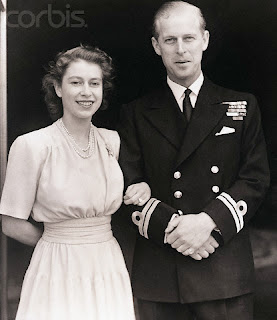 Dear Mr Postman - what a wonderful day for Her Majesty .. bright sunny and warm - it is glorious down here in Sussex by the sea .. the birds are singing and we all feel better!! That was good timing .. to conclude the four letters on Heraldry - our British historical past - so that the next post could be about her Majesty.

We are extraordinarily lucky to still have our Sovereign Queen, which gives us a reason to maintain our wonderful heritage with all its pomp and circumstance - it would be so sad if we were to lose it all. So Happy Birthday your Majesty .. have a bright and wonderful day with your family and friends. The official website of the British Monarchy can be found here.

The Queen is 83 today, and has been our Queen since her Coronation on 2nd June 1953, albeit her reign started on 6 February 1952 when her father, George VI, died. Her father had been very ill for a while and Princess Elizabeth carried with her a draft accession declaration, which came into force when she was in Kenya on an official tour on her way to Australia and New Zealand.

This was the first television I had ever watched .. we had to travel from our home to a friend of my father's in order to watch the event - the Queen had expressly requested that the BBC cover the event using the relatively new technology of television! An estimated 20 million people watched the entire ceremony, while 12 million more listened on the radio. Radio was launched in 1922, the BBC was incorporated in 1927, while television commenced in 1932 - and during this time we had the war years in between.

We watched the University Boat Race from Mr Blake's house too .. probably in the same year - my father used to row for Worcester College Oxford before the war .. see my previous post. I do believe that I remember Mr Blake's house .. it backed onto the Thames and we were able to access the slipway to watch the race .. so it would have been an ideal place for two small children (5 and 2) to play, while at the same time to sit and watch this incredible box which had these moving pictures of the Procession, the Gold Carriage, the Ceremony, the pomp and circumstance after the deprivations of war ... we still had rationing!

On Saturday, April 18th, another milestone was reached .. Prince Philip has become the longest serving royal consort in British history ... overtaking the record of 57 years 70 days set by George III's wife Queen Charlotte - who died in 1818. The Queen must live until 10 September 2015, when she would be 89, to claim the record of the longest serving monarch -presently held by Queen Victoria (63.5 years).

The Queen has always appeared extremely aware of her responsibilities and has a deep sense of religious and civic duty, and to take her coronation oath seriously - and for that we admire her in this day and age of spin and celebrity .. she maintains her pride in all things Constitutional.

Thank you Mr Postman for bringing us this letter reminding us of a few snippets of information regarding the Queen and a few personal remembrances to stimulate and trigger some discussions with my mother - we will enjoy these and no doubt laugh at two tottering children .. who are distinctly older now!

Yes - I do remember the film The Queen detail from Wiki; and perhaps the YouTube clip of

President Obama meeting the Queen this year is another link worth having here .. for a quick reminder. Some of the information came from Wikipedia: (The Queen or BBC), while others are personal memories.

Hi Positively Present .. thanks so much for visiting and showing appreciation .. I too appreciate it .. both for my Ma and for my own self - as I learn.

Hi Hilary,
Thank you for your story on the Queen. I am originally from Hong Kong, a British colony, so it does fill a special place in my heart.
Giovanna Garcia
Imperfect Action is better than No Action

Hi Gio .. thanks for enjoying the story. Yes - she does feature in all the Commonwealth countries and Hong Kong had really strong ties - so I'm plesed she's got a special place in your heart.

Hilary, thank you for all the great information about the Queen. So nice to see. Great job as usual. Have a good day.
Dan and Deanna "Marketing Unscrambled"

Hi Dan & Deanna .. thanks for coming over .. it was really interesting finding out those few facts .. something of the old days too ..

The Queen is a national treasure in Britain! It is interesting, from an American stand point, that the English are so enthralled with royalty.

I was dissapointed that Obama did not give better gifts to the queen when he visited her. There is such a rich bond between England and the U.S.

Human beings can learn much from reflecting on perceived events. History repeats. Valuable lessons exist and reappear for human benefit. What people are ready and willing to accept changes with their level of awarenss. That is, what comes across as acceptable or not evolves with one's perception.

Hi Peter .. well I certainly consider she is a national treasure. To me it's the pomp and circumstance together with all the history .. the heraldry, the symbols - the regalia: crowns, sceptres, swords etc etc, golden carriages etc .. - yes probably symbols of the elite .. but Britain's history and I'd hate to lose all that.

Our ceremony's we do so well ..

Re Obama's gift .. I have to say I thought it was quite clever .. after all she's probably got it all ..

All the best & I'm thinking of you now ..
Hilary Melton-Butcher
Positive Letters

Hi Liara .. thank you for visiting.

History certainly repeats itself and I hope that in this day and age we can all learn to be humble again and be ready to accept change, do things differently and help others ..

We certainly need to reflect on events of today - the happenings .. as I don't believe as a society we do give cognisance or thoughts as to why & how we help ourselves.

With everything that is happening with your mom...I am surprised that your able to do as well as you do!

Hi Pete .. many thanks for the extra comment .. I feel I could do more and am not .. but my head is above water, which is the main thing & I'm moving forward.

Thanks for your support and concern ..