This is a story for Catarina ...Have some Madeira m'Dear? 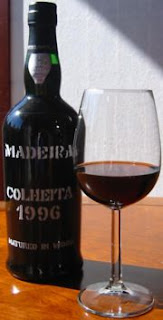 Dear Mr Postman .. how lovely to see you today .. and I see you've brought a letter for Catarina .. this should be interesting ...

Dear Catarina - my mother loves seeing you when you visit your great-grandmother, Olinda, who is also in the hospital .. and it is really kind of you to wave back! I thought a little story about your homeland (except you're so English now) and some other little points of interest that I've found out or remembered ... Mum and I call these - Hilary's snippets! .. might interest you.

Dear Readers - Catarina is 9 .. and loves school .. and loves animals - she has a cross Labrador-Alsation and cat here in England, while they also have two dogs and some kittens in Maderia - where the family have a home. She was reading a story about a cat .. (bad Hilary cannot remember the name of the book!) .. I wonder if she's read the story of the Mousehole "Mowzal" Cat I mentioned recently? ... I'll print her a copy out. Her grandmother, Maria, takes care of her after school .. and they visit and bring great-grandmother some treats - to ensure she gets better soon.

Madeira .. conjured up memories from our past .. my own grandmother had visited Madeira quite often on her way out to India from the 1920s onwards .. as it was the scenic route .. via Cape Town and the tip of southern Africa. So we remembered the embroidery, the magnificient scenery of this tiny island ..the fantastic flowers, the butterflies .. apparently the biggest European tarantula spiders live on the Desertas islands - and can be as wide as a normal man's hand .. while the islands have more than 250 species of land molluscs (snails and slugs), some with very unusual shell shapes and colours - they are only found here and are also in need of protection.

My mother loves butterflies and we have them flying around her room .. painted lady, swallowtail, large skipper, male orange tip, small copper, common blue .. such wonderful evocative names .. Catarina - you can almost visualise them from their descriptions - can't you? Your Madeiran Large White butterfly is extremely rare .. and needs protection too - have you ever seen one?

We talked about Madeira .. and did not know much .. so my mother suggested that I 'google' it .. and see what I came up with .. Madeira was discovered by the Portuguese in their exploratory phase in the 1400s .. finally it became independent on 1 July 1976. The population of Eastbourne where we live is 95,000, while the county of East Sussex has a population of about 762,000 .. Madeira falls somewhere in between with a population of 246,000.

Funchal is the capital and is named after the funcho (fennel) growing there. For us .. both areas have important tourist industries .. Eastbourne claims to be the sunniest place in Great Britain .. it is pretty good!! .. while Madeira basking in the Atlantic Ocean south of Portugal and off Morocco can definitely claim to have a sunny climate.

However ... Madeira has one claim to fame that we here in Eastbourne do not have .. though my mother's favourite 'wish' tipple now is champagne, which they're starting to being able to produce in the UK due to global warming ... I deviate .. Madeira wine .. that wonderful fortified Portuguese wine .. have you tasted it - Catarina?

The islands have a long winemaking history dating back to the Age of Exploration when Madeira was a standard port of call for ships heading to the East Indies or the New World. Once when a shipment was returned after a voyage being tossed on the high seas, exposed to excessive heat and changes of temperature .. it was found that the wine flavour was transformed. A similar process is utilised today .. however the wine "vinho da roda" does not now make a round trip in a ship!! .. and Madeira has become a very robust wine that can be quite long lived, even after being opened.

Madeiras have been known to survive 150 years in excellent condition .. and it is not uncommon to see Madeiras pushing the century mark for sale at stores that specialise in rare wine!! Before refrigeration Madeira wine was prized in areas where it was impractical to construct wine cellars, e.g. in the southern States of America, because unlike other fine wines it could survive being stored over hot summers without deteriorating.

Some other interesting notes for our American readers .. apparently the American leaders - founding fathers and presidents - all appreciated the Madeiran wine. Thomas Jefferson insisted on it being used to toast the Declaration of Independence - 4 July 1776. As well as the "vinho da roda" wine, there is another style called "Rainwater" - it is rarely produced today and, when it is, is usually shipped only to the the US. A possibility for the name 'rainwater' is that rain somehow got into the casks while sitting at the docks .. so the merchants decided to offer this 'new' wine .. and were surprised to find that it was very popular with the local Americans!!

My mother and I remember the name 'Madeira' for another reason .. the wonderful song from Flanders and Swann "Have some Madeira m'dear!". It's available on Youtube .. they were wonderful songs with some brilliant lyrics .. so do please have a listen .. Youtube - Flanders and Swann - Michael Flanders is in a wheel chair, while Swann plays the piano: an inspiration .. bringing joy to my mother some 50+ years later ... we did used to laugh and still do .. they are just so light and touching .. stories told through lyrics and music ..
http://www.youtube.com/results?search_type=&search_query=Madeira+M%27Dear

Have some Madeira M'Dear .. is a naughty but fun song - loved by all ages .. with its lyrics ..
and starts:

She was young, she was pure, she was new, she was nice,
She was fair, she was sweet seventeen,
He was old, he was vile, and no stranger to vice,
He was base, he was bad, he was mean.

It's been a pleasure to meet you Catarina with your family, and my Mum and I both wish you all the best at school and for happy times here in England and in Madeira .... lucky girl .. can you pack us in your suitcase please .. so we can come with you??!!

Thank you Mr Postman .. it's kind of you to say that you enjoyed Catarina's story .. and that she'll be happy to know about the Mowzal cat! .. she's a lovely girl - well mannered and very polite = a pleasure to have around!!
PS: Henry the Navigator, a Portuguese Prince, was instrumental in the Ages of Exploration .. parts 1, 2 and 3 ...
Hilary Melton-Butcher
Positive Letters
Posted by Hilary Melton-Butcher at 10:05

That is a fun little song, I have never head of it. So thanks for sharing. I wish Catarina's grandmother and your mother both good health and a lot of joy in their lives.
Thank you,
Giovanna Garcia
Imperfect Aciton is better than No Action

Hi Gio .. thanks and I'm glad you enjoyed the song .. we loved those kind of songs over the years and still do!

Catarina is a great little girl and I hope her great grandmother gets better and can be at home with her family soon.

My Mum and I love seeing her .. and interacting with them ..

Thanks ..all the best
Hilary Melton-Butcher
Positive Letters

Hilary, thank you for such fun today. The best to you and your mother. Hope that everything goes well with her.
Dan and Deanna "Marketing Unscrambled"

Interesting information on Maderia! I do enjoy a good glass of wine myself.....but I was not as familiar with the history of Madeira.

All quite interesting! Thank you for your informative post!

Hi Dan and Deanna .. just so glad the post brought you some joy .. I had fun writing it, reading it to my Ma and Catarina seemed quite amused to be sent home with her story!!

Thanks for your support ..
Hilary Melton-Butcher
Positive Letters

Hi Pete ..glad you found the information interesting .. it's amazing what I learn as I do the post and link them up. My mother was amused at the Madeira being shipped around the world and back again before it could be drunk .. as they said it was too expensive to do that for long - hence they developed the land process .. leaving it in the heat, and I guess steamy Atlantic air ..

Thanks for visiting ..
All the best
Hilary Melton-Butcher
Positive Letters