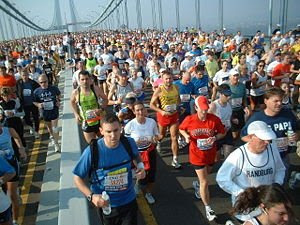 Dear Mr Postman thank you for coming today .. I see the letter is about the London marathon .. a landmark in recent years and my mother certainly liked to watch and get to see the sights of London from the magnificent television coverage we get today .. bird's eye views, close ups, statistical analysis and all - so she'll be interested to hear that a British lady, who nows lives and works in Japan came 2nd.

Daphne from Joyful Days commented on yesterday's post "Another day .. are we in Tokyo?" that Mum and I are on a marathon together .. good timing as today is the 29th London Marathon .. frankly I'm glad ours hasn't been going since 1981!! A statement I read makes sense .."What today's marathon will show, above all, is that the human spirit is only healthy when it has a goal": I'm sure I've kept myself sane initially a) by providing some light and laughter to my mother b) by writing positive letters to friends and family including fun anecdotes which make people laugh, and now .. through repeating a) & b) - I've developed a formula for the future .. a goal that can continue when my mother crosses the rainbow bridge.
Just some simple facts .. the distance was an approximate length of 40 km from the town of Marathon to Athens .. on the introduction of the event in the Olympics in 1896 .. that was it .. approximately 40 km. The distance was finally established for the 1924 Paris Games based on the calculations and alterations made during the 1908 British Olympic Games .. which started at Windsor Castle .. I'd hoped to put an allegorical comment in here .. but don't really believe I can .. so please Wikipedia for the details!!
This is the Wikipedia article on The London Marathon was founded by the former Olympic champion and renowned journalist Chris Brasher and John Disley. In 1979, shortly after completing the New York Marathon Brasher wrote an article for The Observer newspaper which began:
"To believe this story you must believe that the human race be one joyous family, working together, laughing together, achieving the impossible. Last Sunday, in one of the most trouble-stricken cities in the world, 11,532 men and women from 40 countries in the world, assisted by over a million black, white and yellow people, laughed, cheered and suffered during the greatest folk festival the world has seen."
Inspired by the people of New York coming together for this occasion, he went on to question;
"...whether London could stage such a festival?" (picture of the NY marathon!)
As we all know we could .. and this is the established course and the one that will be used for the 2012 London Olympics. It's a glorious day .. said to be reaching 20 degrees C in London, which is fairly warm .. the runners, all 35,000, of them gather on Blackheath and in Greenwich Park from where they set off, passing the Maritime Museum, the Cutty Sark - a merchant clipper ship built in 1869.
A great deal of the course follows the Thames on the south side before crossing over Tower Bridge, turning east into Docklands, round the Isle of Dogs, past Canary Wharf, turning west and on through the City past St Paul's Cathedral, and via the Embankment past Big Ben and Parliament Square, Bird Cage Walk and on to the finishing post in the Mall after running past Buckingham Palace.
So with 6,000 volunteers, 6,650 marshals, 25, 300 helping hands, 46,000 tons of rubbish!, 82 pubs on the way .. if you want to stop off?!, 1,500 St John Ambulance staff, 70,000 very sore feet, 100 lbs of petroleum jelly to treat those sore feet and 750,000 bottles of water .. it is estimated that an amazing £246 million pounds will be raised for charity. Apparently London is the largest charity raising event in the world .. and each year they have a particular charity that the marathon itself supports (The Children's Trust) over and above each individual's fund raising abilities. For more again please see Wikepedia.
Congratulations to all who enter and put 'mind over their sore feet' .. all the way round ..and who raise awareness of the various charities for which they are raising monies for.
Thank you Mr Postman .. it is really interesting and so inspiring what can be achieved by normal human beings with a desire to achieve and raise money for their loved ones, lost ones or passion for a cause .. may they all be happy with their achievement today .. and these facts will interest my mother .. as there's lots of talk about ..
Hilary Melton-Butcher
Positive Letters
Posted by Hilary Melton-Butcher at 13:01

Love the marathon idea. I think Daphne makes a really good point about this. Very fitting.

And I LOVE the image with the rainbow in it. So beautiful! :)

Some people take the view that life is supposed to be a struggle, wherever you are. These people believe they are meant to feel drained, challenged, and to generate negative energy. Another perspective is that the mind determines how you view a given situation. That is, you have conscious choices to focus on things like the throbbing feet beneath you, how thirsty you are, how far you have yet to go is uncertain or, the choice to realize how far you have come already, how much you have accomplished and learned and the fact you cross the finish line. IN truth, every person is only ever competing with the self. You are your own judge and jury. You can be hard on yourself or kind and loving. What is important is how you handle what is happening, not the events unfolding themselves.

Hi Positively Present .. thanks .. the idea just seemed to gel .. so here it is .. it's a long straight road which will divide at some stage and the fork ahead will take me on .. & my Ma will go across her coloured bridge ..

Thanks for loving the rainbow image .. I just loved the way it went on up and up .. into the rainbow and golden light.

Thanks for coming back again ..

Hi Liara .. thanks for that comment to 'our discussion' .. I will take next week positively .. I need to handle it really well .. one day at a time ..

Thanks for reminding me ..

Here's a cool tidbit I learned during our March of Dimes fundraising walk last week. One of our team members used to be a marathon runner. She told me that originally the marathon distance was measured at 26 miles. Today, a marathon is 26.2 miles. Why the .2 additional miles?

Well, she explained that marathon runners today run an extra 0.2 miles so they can run past a cheering crowd of fans towards the finish line! How's that for the extra push a runner needs after 26 miles? Too cool!

Bless all those running for such an incredible cause! Inspiring!

Hi Roxanne and Hugo .. thanks for visiting .. I love your extra .2miles .. that the last part you can enjoy and be welcomed home .. I agree it is "too cool!"

Brilliant that you all ran and had such a great day .. or walked - as I know there were some walking March of the Dimes - sorry I see now you all walked .. oh well! You all succeeded.

Blessings as you say ..