Have you seen the stones of Mars? 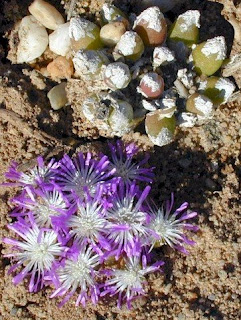 Lithops have other descriptive names, such as Bushman’s or Hottentot’s buttocks; the Afrikaaners call them beeskloutjies (cattle hoof) and skaappaatjies (sheep hoof), or belly plants .. perhaps because you have to crawl on your belly in order to find them. Originally classified in the Mesembryanthemaceae family in 1811, it was renamed in 1922 from two Greek words ‘lithos’ meaning ‘stone’ and ‘ops’ meaning ‘like’.
A single plant is about the size of a ladies’ fingertip, the plants go dormant in the dry season, protected by a papery covering, which sloughs off in the rainy season as the plants grow and fill up with water (white remnants can be seen. In the top left corner of the picture are some real stones. Courtesy of http://made-in-afrika.com/myblog/14aloenamaqualand.htm

Lithops disappear into the stony desert without a second thought and have evolved to mimic the stones and pebbles around them ... the reason for this disappearing act is so obvious in that treacherous hot environment that anything remotely edible to small mammals, animals or insects would not last long. 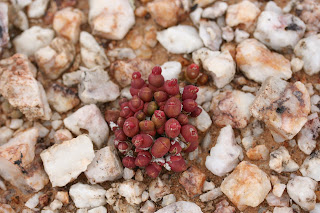 There are predators, if we can call them that, for these succulent treats – particularly the Bush Cricket, the Cape Porcupine and the Cape Ground Squirrel. So the clever living stones developed their own way of hiding, reproducing, obtaining the maximum benefit of any nutrients, minimum rainfall or life giving fog leaving dewy drops behind before it is burnt off by the rising sun.

These stone faces are found prolifically in Namibia, particularly in the desert scrub areas, where plant life is scarce; where temperatures can be excessive (46 deg C) or nearly zero, when night time lows are barely above freezing. They exist on the margins of survival: if they get too much sunlight, the water held in their tissues heats up, even their leathery leaves cannot help, and they are cooked from the inside out. In their natural habitat they are usually shaded for part of the day by rocks, shrubs, or other plants larger than themselves.
Bush Cricket - can you spot him? 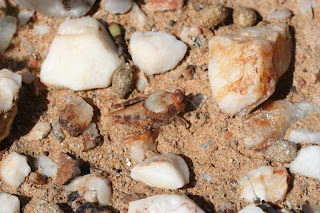 The Knersvlakte is a region of hilly terrain covered with quartz gravel in Namaqualand in the north-west corner of South Africa – earth’s Mars is here .. “The Richtersveld” and is regarded as the only ‘Arid Biodiversity Hotspot on Earth’, which still has an astonishing variety of plant, bird and animal life, much of which is endemic. The landscape is sometimes described as “martian”.
The Richtersveld National Park is a mountainous desert landscape and the closest most of us will ever get to setting foot on Mars (cheaper too!). Hot days end with incredibly vivid sunsets that paint the sky in palette of colours before giving way to inky black nights where shooting stars regularly blaze through the dark sky.

The Orange River rises in the Drakensburg mountains, flows through South Africa before becoming the border with Namibia, creating a wide river bed through these gravel plains and dunes then emptying into the Atlantic Ocean, providing the only source of water in the Richtersveld after cutting its green swathe through this martian landscape. 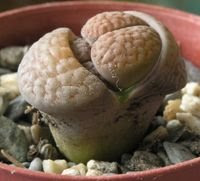 Swollen green fingers and blue-green pebbles can survive with their leathery leaves and adapted life forms, sprouting forth once a year with a brightly coloured flower before dying back, splitting creating a fissure for the two new leaves (sometimes four, this is how they multiply), and from where the new head emerges.
The new ‘stone like’ head derives all its moisture from the old leaves, which gradually shrivel and become a dry, parchment-like collar around the base of the plant ... giving life to the martian desert, naming it Knersvlakte “the gnashing teeth scrunch” of pioneer wagon wheels on the hard quartz stones, as they kept rolling on over these inhospitable and uncompromising arid desert plains.
Richtersveld at night

But as with all life – it is interconnected, the stone like pebble offers seeds for the tiny insects hiding amongst the quartz chips, the insects being guzzled by the small mammals or rodents, those then being hunted by the larger mammals and so life goes on – this martian landscape also provides life.

It’s good to see you today Mr Postman and for letting us have this letter – my mother enjoys remembering her trips into the northern Cape and Namibia .. she liked exploring - we have had a wonderful sunny Saturday ..

Was consciously unaware of your Mars and geological interests. You may be drawn to read more about Atlantis (possible 1st dimensional world). Some people sense that civilistion was originally based on planet Mars and a colony existed on Earth. The Atlanteans were known to work extensively with the healing properties in crystals. The details of their work is detailed more in written works by mystics.

Hi Liara .. thanks for being here .. I love stones etc .. probably the love of Geography as a girl, and living in SA and having lots of friends in the mining world, who've remained with me today .. the Kimberley great hole fascinated me .. not a trade I'd like to do ..

I'll look into Atlantis .. and your note that civilisation might have originated from Mars .. I haven't gone the crystal route yet ..

Thanks for the information though - always interesting to learn more ..

South Africa and all it's beauty is fascinating! It's surely a different world. How wonderful to have experience it. Many of the things you write about are very new to me and I've enjoyed the learning experience. I'm seeing much of the unknown world through you. Thank you so much!

Hi Hugo and Roxanne .. thanks so much for that - and I'm so pleased you're enjoying seeing different places and find out about different parts of the world, or historical developments.

It's good to share with you and know that you're getting some pleasure ..

Thanks you for your enlightening post on plants that resemble rocks! Obviously, the plants have adapted over a long time to protect themselves.

Hi Pete .. thanks for stopping by .. glad you enjoyed the rock plants. They must have taken millions of years to adapt - but perhaps not, as some seem to change quite quickly as we're finding out now. But they are brilliant little pebbles - bringing life to the gravel sands ..