Painted Ladies of the World? 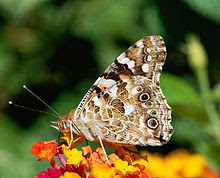 Amazing what epicurean delights painted ladies like to eat or breed on – cudweeds, thistles, lupins, mallow, stinging nettles and everlastings .. so they are no longer ever lasting! Butterfly migration stopped the trains in 1889. Escaping from the mountains they are as determined as prisoners to find new lands, to thrive and produce new generations before their time is up.

Painted Lady Butterflies have been prolific here in England this year – we were alerted to be on the lookout for the first waves in late April or early May .. a flock, a wave, a congregation – call it what you will .. travelled to this part of the south coast where William the Conqueror of 1066 fame landed at Pevensey, before he waged war on Harold and took control of England, changing the course of western history.
These wonderful stained-glass flutterers, just one of the many, many varieties of the lepidopterous order of insects, which have four scale-covered wings, are found on all the continents except Antarctica.
Our English ones come up from the Atlas mountains in Morocco, flying over the Mediterranean and English Channel, on northwards to the Scottish islands and some on to Iceland. How do they do it, why do they do it? 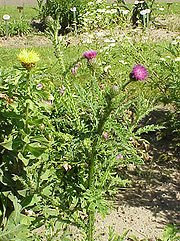 Carduus crispus, (Papilio cardui Linnaeus, 1758) Common Thistle
We have the first wave in Spring, which lay their eggs on the common thistle, asters, borage, forget-me-not, hollyhocks, the legume family flowers to name a few. The caterpillars feed on a variety of host plants of the daisy family, especially Carduus crispus, (Papilio cardui Linnaeus, 1758) as implied by the species name cardui – Latin for “of the thistle” ; while the adults drink nectar from a variety of wildflowers, more commonly the favoured thistle, buddleia (butterfly bush), asters, tickseed sunflowers and zinnias.

This first wave are about to hatch from their chrysalides in the pupal stage of butterflies. The term is derived from the metallic-gold-colouration found in the pupae of many butterflies referred to by the Greek term (chrysos) for gold. Interestingly, as we are most familiar with this type of pupae, most chrysalides are attached to a surface by a Velcro-like arrangement, spun by the caterpillars, of a silken pad and a set of hooks. 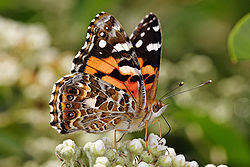 Australian Painted Ladies are mostly confined to Australia, but have been wind-swept to the islands to the east, including New Zealand. During spring adult butterflies migrate south in large numbers from Queensland and New South Wales, surprisingly in 1889 this migration was so large that trains were unable to generate sufficient traction because of the large numbers of painted ladies resting on the tracks. The perennial (Ammobium Alatum) Winged Everlasting is an important food-plant for the Australian caterpillars.
American Painted Ladies live in flowery habitats, usually in the mountains, but are also found in Madeira, the Canary Islands and occasionally in southern Europe, their larvae feeding on the daisy family, especially the cudweeds (Gnaphalium), which have several common names, including ladies' tobacco, California rabbit tobacco, California cudweed, and California everlasting.
Gnaphalium californicum - California everlasting

There’s also a West Coast Lady, which is one of three North American species of brush-footed butterflies, known colloquially as the “painted ladies”. This particular butterfly occurs throughout much of the western United States and south western Canada. 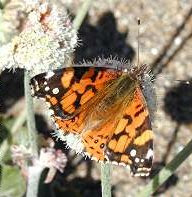 Brush-footed West Coast Lady
Painted Lady Butterflies, as you would expect, need to rest as they go on their migration route, and not wanting to miss a trick .. they breed on the march. The eggs take three to five days to hatch, while the caterpillar takes seven to eleven days to turn into a chrysalis, and then another seven to eleven days to become a butterfly, four to six days after emerging it is old enough to mate, and then the cycle starts all over again. 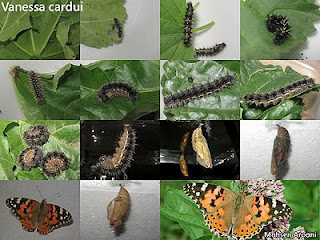 Life cycle of the Painted Lady – by Mohsen Arooni, Iran - via Wikipedia
They live between 30 and 40 days, because after about three weeks they are tired and tattered .. a fully fulfilled life cycle, however butterflies are early barometers of habitat change occurring within a year.
Migrating such distances, 1,000 to 1,700 miles .. they’ve been found on off-shore oil rigs, which are about 100 miles from the coast of Scotland .. they don’t tend to stay in one area long, breeding as they go – thousands of caterpillars were seen hanging from hedgerows and forming ‘curtains’ on the Iberian peninsula.
However they are incapable of surviving our winter, as they do not hibernate like our English native butterflies, why do they come, where do they go, how do they get back? Do they do the reverse trip, called by their ancestral roots – does anyone know?! We’re about to get a billion short-lived baby boomers .. can we track their journey home .. will the Atlas mountains welcome them back .. perhaps our internet savvy generations can tell us the last call of the wild for these Painted Ladies.

Thanks for visiting today Mr Postman, my poor mother wasn’t too well last night, but she still seems to come up fighting and despite having a fit, a common occurrence after a stroke, she seems fine. She’s had a busy week as she’s been awake a lot more than usual and has wanted me to read to her .. sometimes for two hours .. and she absorbs and comments on the information .. so nothing wrong there then! We look forward to your visit tomorrow .. I hope you will have a drier day for your deliveries.
Hilary Melton-Butcher
Positive Letters Inspirational Stories
Posted by Hilary Melton-Butcher at 20:37

Hilary,
Very interesting to learn about these "Painted Ladies", thanks for sharing this...

Hi Lance .. thanks so much for coming over .. Painted Ladies are so pretty, along with all the other butterflies .. only room for one sort! .. glad you enjoyed it ..