Tunnelling through a cliff just to go for a bathe? A family swim perhaps, well no - not an ordinary swim as we would expect ... but a segregated one? A swim where you had to wear a dress of sorts, or nothing at all? A swim where you were backed into the sea, and could emerge when the water was two or three feet deep?

Well those were the days of Georgian Britain (1714 – 1830) when taking the waters – sea water – was considered something you did for your health, rather than for pleasure. Ilfracombe, on the north Devon coast, in the late 1700s became a fashionable spa and sea-bathing destination for wealthy Georgians, when a number of hotels, guesthouses and public rooms were established.

The town’s status as a resort was confirmed by its inclusion in the national “Guide to all the Watering and Sea Bathing Places” dated 1803. The Georgian visitors must have wanted adventure ... as access to the sea was gained by climbing the cliffs, rounding the point by boat, swimming or at the lowest tides clambering around the rocks of the point – this was no easy playground. The sexes were still segregated, the ladies would frequent one local beach, while the gentlemen went on a boat trip to another cove where they would bathe in the nude.

Dress sense for the ladies was somewhat different – a cloth bathing cap or hat, a chemise or frock like top, and knickerbockers keeping most flesh covered up – weights were even inserted into the hem so that they would not float up ... what an uncomfortable way of swimming. 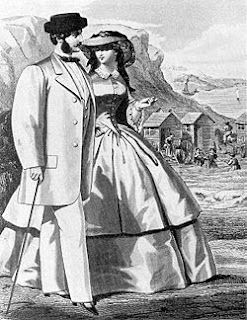 The introduction of bathing machines, as they were known, provided a way to ensure modesty was preserved, as well as enforcing the etiquette rules. As early as 1736 an engraving shows people bathing and what appears to be the first evidence for bathing machines; their use spread to other parts of the world, eventually in 1901 legal segregation ended leading to a rapid decline in bathing machines.
1859 fashion plate from the "Gazette of Fashion", showing both male and female daywear, with sea bathing scene in the background (including bathing machines)

Talk about a rigmarole to go swimming ... ladies entered in their street clothes, changed, placing their street clothes into a raised compartment where they would remain dry. The most common machines had large wide wheels and were propelled in and out of the surf by a horse, with a driver. Other methods were used including the new invention of a steam engine, which propelled cables pulling the machines in and out. 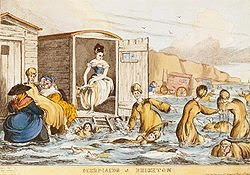 Ilfracombe, already established and listed in the Domesday Book of 1086, was a significant port on the Bristol Channel by way of its natural harbour providing a safe port on stormy days, with trade routes long established between South Wales and Ireland. The inaccessible rocky shoreline also provided caves for the smugglers or pirates of the time.
Mermaids at Brighton swim behind their bathing machines in this engraving by William Heath, c. 1829
A novelist Fanny Burney stayed here in 1817 and commented in her diary over a two month period, about a captured Spanish ship, two ships in distress in a storm, and her lucky escape after being cut-off by the tide.

In 1810 a local Ilfracombe entrepreneur saw the potential of the two sheltered coves used separately by the ladies and gentlemen. At that time it would have taken over 30 hours to travel down from London, with the last part on a fairly uncomfortable rutted coach road over the hills down to the fishing and trading port – an easy route to the sea itself would enhance this pretty seaside town. 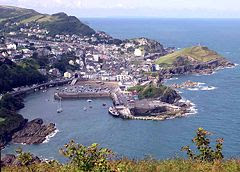 Miners were brought from the Welsh Valleys to cut tunnels through the cliffs, to provide access to the two coves, and in 1823 the beaches were opened to the public. Segregation was still rigorously enforced, the coves were modified in 1824 by enclosing two extensive tidal bathing pools.

Still preserved is the old Greek inspired Bath House, built in 1836, as is the wood fuelled pump house which served to feed sea water to the Bath House for cold and hot sea water baths: perfect in the days when bathing was still viewed as a health spa regime, when discomfort might mean ‘improvement’.

Ladies - imagine that time ... standing shivering on the steps wishing your ordeal was all over, that you did not have to get soaked in that cold, cold water, then coming out and struggling to get dry, constantly rubbing the sea water off, the sticky dryness once finally dressed again in your street finery. I know the alleged reason for sea-bathing is that it makes you feel so well afterwards; but so does any unpleasant experience, merely by force of contrast.

Fortunately today you can go down the gently sloping tunnels, coming out into the light, as the picture unfolds, a thumbnail to start with, a panoramic seaside view exploding in front of you ... rugged cliffs, rippling waves, or splashing bursts of spray, rock pools full of watery delights, craggy rocks with barnacles, pockets of golden sand, turquoises, deep greens, sea greens, blue skies, dark forbidding clouds scuttling by ... perhaps the sun sparkling the waves, or when setting sending its golden orange glow across the seascape ... an arena of peace – unspoilt by man since the tunnels were built.
Dear Mr Postman .. thank you for coming today and delivering this letter of the seaside .. my mother will definitely be interested, as will my uncle, it's an area he knows well.
Hilary Melton-Butcher
Positive Letters
Posted by Hilary Melton-Butcher at 14:01

Interesting post about the history of English sea bathing! It reminded me of the Roman communal baths! Although, the Romans baths were inside buildings.

It obviously was an English cultural phenomenon!
THank you for an interesting post!

Hi Pete .. thanks - I think this Bath House, must have been in a cave, or something .. I tried to find more about it but couldn't - other than the terraced row of buildings in the town referring to BathHouse Terrace (or similar). The idea was obviously linked, as you say to the Romans, .. and the idea of bathing for health with all the ramification of segregation etc absorbed the English for two hundred years or so ..

Glad you enjoyed it .. thanks for being here .. have a good weekend ..
Hilary Melton-Butcher
Positive Letters Inspirational Stories

Boy, wouldn't those ladies flip to see us frolicking in our bikinis today? What is the world coming to? :)

That is amazing, the clothes that they had for bathing-very interesting. It looks like a beautiful place. Thank you for more things that we did not know. Have a good weekend.

it is a topsy turvy world as times change - what next for bathing? Interesting to learn about - my uncle was saying that his mother had a dress costume with a lose frilled bottom tied in a little ..

Hi Dan and Deanna .. thanks for visiting .. I'm always interested to find out more .. and it does look a lovely place - I think I might visit one day!

Thanks - you too have a good weekend .. lovely sunny one here .. family bbq tonight ..
all the best -
Hilary Melton-Butcher
Positive Letters Inspirational Stories

Sea Bathing....it is always interesting to see how things got started. Thanks for the history.
Giovanna Garcia
Imperfect Action is better than No Action

Hi Gio .. thanks for coming by .. it is interesting how we got clothes to go swimming - we're almost back to naked times. Glad you enjoyed it ..

Have a good weekend .. all the best
Hilary Melton-Butcher
Positive Letters Inspirational Stories