Can you imagine a hundred pigs running around in the woods, surrounded by vineyards in the middle of London – is it 2086, has climate warming set in – no, but this was Bloomsbury as described in the Domesday Book.

Bloomsbury the borough, or the bury, of William de Blemond, a Norman landowner, the area originally being known as Blemondisberi; the bury, as a description, is still recorded in many of our towns: Bury St Edmunds, Canterbury, Shrewsbury to name a few.

Edward III passed the lands on to Carthusian monks, ensuring that the area stayed rural, however with the Dissolution of the Monasteries, Henry VIII transferred the land to the Crown, and then granted it to the Earl of Southampton. The Earl started developing his estates by laying out Southampton Square, now known as Bloomsbury Square; the fashionable residential areas of the 17th and 18th centuries were added to by the Dukes of Bedford, becoming notable for its array of garden squares.

One of these squares, is Queens Square, pictured here in 1787, with an open vista stretching north towards Hampstead. As a matter of interest Bloomsbury is the home to many academic institutions, some that are notable are the British Museum, the Royal Academy of Dramatic Art, Great Ormond Street Hospital for children, and the National Hospital for Neurology and Neurosurgery – where my mother spent four months 220 years after this picture was drawn!

Queens Square, Bloomsbury in 1787. The fields to the north reach as far as Hampstead.

This idyllic setting, with majestic Georgian mansions looking over some private and some public gardens, was the home to the Bloomsbury Group or Bloomsbury Set, as they were known, a group of writers, intellectuals and artists who regularly met in the surrounds of this square. Originally the men established an eclectic mix of thinkers while at Cambridge, then through the sisters, Vanessa and Virginia, met other close friends and relatives who lived, worked or studied near Bloomsbury.

Vanessa married Clive Bell, with Virginia marrying Leonard Woolf, and with their unconventional households (friends and families) bought properties in East Sussex to escape the turmoil of war, most of the men being conscientious objectors. Charleston Farmhouse where Vanessa Bell lived, but had moved down with Duncan Grant, became the meeting place for the Group members. 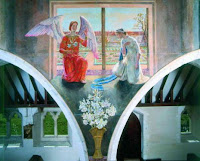 Virginia and Leonard Woolf at their London home in Richmond founded Hogarth Press, and started hand printing their books, which grew from a hobby into a commercial business; at the end of the 2nd World War it became an associate company of Chatto and Windus, itself an imprint of Random House. (There is no connection to Bloomsbury Publishers, whose offices were in Bloomsbury).

The Group were all incredibly prolific in their journals, essays, novels and art influencing and developing their controversial take on life, providing the early 20th century with new modern attitudes towards feminism, pacifism and philosophy.

Charleston Farmhouse, the country home of the Bloomsbury Group, has been decorated in the style of the Italian fresco painters – the walls, doors and furniture all became works of art. The walled garden with rambling roses displays mosaics, box hedging, wild flowers and natural planting interspersed with statues; the pond covered with water lilies, the lawn and paths leading to this focal point from the house, all offer an artistic opening to expression.

The Bloomsbury murals also transformed the most delightful tiny church at Berwick, near Charleston, into an artistic and cultural treasure; the murals now adorn the Nave walls, the Chancel Screen, the Pulpit, both sides of the Chancel Arch as well as the Altar frontal.

Bishop Bell of Chichester (the Benefice of Berwick falls within the Diocese of Chichester) expressed his belief that the murals represented a fulfilment of his vision to reunite religion and ‘modern’ art and so bring about a ‘spiritual awakening of our country’. In 1929 Bishop Bell set out his vision, at his enthronement address at Chichester, to include all form of art as an expression of worship of God. 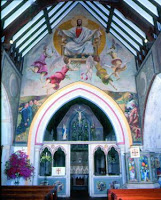 The ‘how’ of these murals coming about is described in a wonderful short newsletter issued by Berwick Church on the 50th Anniversary of Bishop Bell’s death, in1958. I highly recommend a read: it throws a light on the thinking before and after the War and gives an insight into a way of life few of us have experienced; copyrighted pictures and art works are shown, as well as some more pictures of the flower decorated Church celebrating this act of inspiration by the Bishop.

The Bloomsbury Group continue providing today’s generation with new ideas and thoughts, as their biographies reflect, and new works are found tucked away in archives throwing another dimension on this group of artists with their eclectic ideas. We should celebrate their forward thinking ideals perhaps with a spit roast of hog and English wine from Sussex grapes, or perhaps even London grapes as I am sure the foragers will tell us there are plenty to be found.

Thank you Mr Postman for delivering this letter which I know will interest my mother, and I will enjoy reading the celebratory newsletter to her, while she will enjoy seeing the pictures. My brother reads from “Recollections”, by Reverend EB Ellman (1815 – 1906), Curate and then Rector of Berwick for 66 years! He lived in Glynde, Firle, Lewes and then Berwick; he is buried in the churchyard at Berwick. The Reverend, an educated man with a degree in Mathematics from Oxford, has a unique tale to tell of life in nineteenth century Sussex.

Interesting read about Virginia Woolf and the family business. It is great to know that they have been the drivers of new ideas and thoughts to this day. Thanks for sharing it!

Hi Evelyn .. thanks for coming over, good to see you here. The Bloomsbury Group were a real mix and I was really interested to read some more on a general overview basis. Charleston Farmhouse is a lovely little house - tiny rooms and low ceilings!

As you say they are still drivers of thought ..

Funny how Bloomsbury is also the publising house known in part due to the popularity of JK Rowling's Harry Potter books.

The Virginia Woolf story expands the minds of readers. There is always more to a given story than readers initially assume.

Hilary,
Oh, you make me want to travel there. Just the thought of walking the same paths that these gifted writers did makes me tingle with excitement. I've embraced VW's thoughts on what women need (their own money and their own room) for a very long time now. It does the mind, body, and heart good to have such independence. Fosters creativity too!
Your blog is so very informative, and it is obviously born of your passion. :-) Blessings!

What an interesting post. As always we learned a lot. Keep up the good work. We enjoy your positive letters.

Have a good day.

Hi Hilary,
Your title got my attention. Interesting read today, you always have a special to get my little brain going.
Thanks for sharing
Giovanna Garcia
Imperfect Action is better than No Action

Hi Liara - thanks for coming by .. Bloomsbury Publishing actually is completely separate:

I agree it would be great if it published the Bloomsbury Group .. but it was only formed in 1987 .. but as you say they've certainly made their name with JK and Harry Potter.

The Group certainly gave the 20th and 21st century new takes on life, opening up Pandora's box of thinking.

Hi Jan - thanks so much for being here. I really appreciate your comments - it would be lovely to see you here! The walks down in Sussex are magical - as are the walks through London following the literati pavements.

The Group certainly spread their wings and through their prolific writings expanded people's visions. As you say fosters creativity - very inspiring.

I'm so glad you enjoyed the blog .. they are the sorts of things Mum and I discussed when she was able to take more in, but they still interest her.

Hi Dan and Deanna - thanks for your comments - glad you enjoyed it. It's good to see you here and to know you had pleasure reading it!

Hi Gio .. thanks for being here and good to know your brain is going .. you've got lots going on!

Yes - the title seems an important part of each story .. sometimes it comes to me first, sometimes after the event and I draw something out of the words I've written!

Just wanted to say thank you for all the great comments that you leave on our blog. We really enjoy hearing from you. Hope that you have a great day.

Hi Dan and Deanna .. always get there eventually! Glad you enjoy the input .. thanks for checking in!
All the best - Hilary Melton-Butcher
Positive Letters Inspirational Stories