Cape Floral Kingdom and the King of all flowers ... & Mother's Day 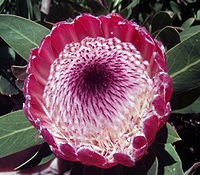 Dear Mr Postman .. oh how lovely! a letter telling me about the flowers I received today .. do you know them - these Kings of the Floral Kingdom? ....

Nature must have been well satisfied with the creation of the most distinctive and beautiful of all African landscapes - the garden lands of southern Africa: the Cape Floral Kingdom - containing a veritable domain of wild flowers, with 16,000 - 22,000 species flourishing to perfection in a climate of ample winter rain and snow, warm dry summers, balmy springs and autumns.

In Europe the recent ice ages wiped out old vegetation and the new plants have not yet had time to produce so many variations. The "Cape Garden" has been carefully protected for over 200 million years from any drastic variation in climate allowing so many species to mutate and proliferate. The Protea family is an ancient one ... its ancestors grew on Gondwanaland 300 million years ago .. and there are subfamilies in Australia and South America. Proteas attracted the attention of early botanists visiting the Cape of Good Hope in the 1600s and were introduced into Europe in the 1700s.

Heathers and heaths, under the botanical name of the Erica genus, flourish here in great monthly swathes of colours across the valleys and mountain slopes - the fading blooms of their predecessors gently seem to dissolve into the fresh new colour of successors.

The Coast of Flowers is at the heart of the spectacular natural garden of the western Cape, and reigning over this whole floral kingdom is the king of all flowers - the Protea. Carl Linnaeus, the Swedish botanist, named these spectacular flowering plants after Proteus, the Greek god of the sea, who was gifted with the power of infinitely changing his appearance.

The protea family are noted for their varied appearances and extraordinary individuality ... and they're protected from the elements with a covering of white woolly hairs. There's a variety called the 'sugarbush' .. and flowers in light yellow or red and are noted for the unusually large amount of nectar they produce and were prized by the early settlers for its sugarbush syrup.

I'm so pleased you liked your letter to go with your Mother's Day bouquet of Cape Floral sprays - treasure it - until tomorrow ....
Posted by Hilary Melton-Butcher at 14:14

Thank you for the interesting information on flowers. I would never think about the ice age effected the flowers.
Thank you,
Giovanna Garcia
Imperfect Action is better than No Action

Hi Giovanna .. I know it always amazes me what's happened over the years .. and the difference between the northern and southern hemispheres was someting that I hadn't taken into account .. I love the Cape floral area ..

Thanks for posting and taking an interest ..

Hilary: Be Positive Be Happy

Your depth of knowledge is enlightening! I think that your background has also given you a perspective that most people have experienced.

The forwards to prior posts were helpful!

Hi Pete .. thanks for your thoughts .. these are things that interest my mother and I & then lead to other thoughts

Glad you like the little introductions .. I'm working on those

All the best - Hilary: Be Positive Be Happy