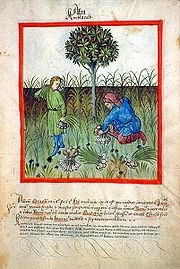 Garlic is so ancient that its origins cannot be traced, and is so basic to our civilisation that it is not known in a true wild cultivar, however the Chinese have been using it medically for thousands of years. Asian peoples, the Egyptians, Greeks and Romans all knew about its medical benefits as well as its culinary attributes.
Herbalists, medicine men, warriors, travellers all carried garlic as a talisman, ensuring its spread across the continents. The plants must have come in many varieties even then – different sorts for different climes, edible cloved bulbs, large and small. As well as prolific fields of wild white flowering garlic were seen around the world, now constrained in the main to the verges, woodlands, scrub-land wherever it can obtain a footing, once bedded in being somewhat difficult to eradicate.
Harvested garlic, from Tacuinum Sanitatis, 15h century (Bibliotheque Nationale)
The Egyptians placed garlic amongst their deities, and no Egyptian priest was permitted to eat it. In one pyramid, an inscription states that 100,000 men were employed on its construction, and these ate garlic, leeks and onions to the value of 1,600 talents of silver. It was one of the staple foods of Egypt where it grew in great abundance. (The talent is one of several ancient units of mass, and one talent of silver would be worth about $20,000 in 2004 money).
Virgil, the classical Roman poet, mentions that the ancient Greek and Roman soldiers, sailors and rural classes consumed this free food, while Pliny the Elder, a learned navy and army commander, mentions that garlic was included in the diet of the Africans. (Onions and garlic travelled well on expeditions). Galen, probably the most accomplished medical researcher of the Roman period, eulogises garlic as the “rustic’s theriac”, or antidote to poison (cure-all).
As the French Onion farmers were in the 1920s c/o Bonnie Alter, and the TreeHuggers Site. 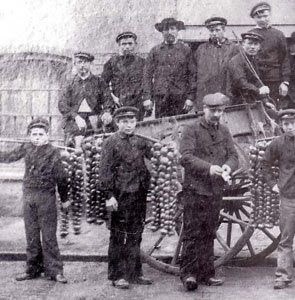 Superstition may be dead or dying, but ancient remedies continue to hold secrets that are slowly being unlocked with the advances in medical technology; garlic never really lost its healing properties being used against colds and coughs, Louis Pasteur having observed its antibacterial activity in 1858. During both World Wars it was used as antiseptic to prevent gangrene, and most of us recognise the benefits of garlic, though we may not like the after effects of halitosis!

I remember garlic becoming a component and acceptable part of British cooking in the 1960s, especially as at that time I realised that I loved cooking and trying new foods. In fact I remember typing up a small batch of garlic recipes for my father and slipping them into a photo album as a present one year!
For about 50 years plaits were brought over by the traditional bereted French onion and garlic farmers, to sell to the British housewife from their bicycles as they cycled round the city streets, towns and villages: one of the lost rural traditions. Those were the days of garlic bread, gazpacho and chicken kiev all becoming stalwarts of our British menus (as a note - I now make herby bread with a touch of garlic, which I find so much more appealing). 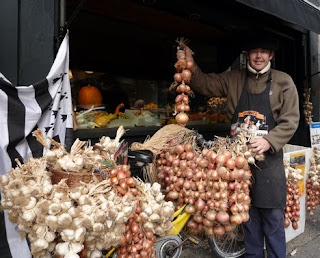 Garlic has that wonderful appetising smell as it slowly melts cooking in butter or olive oil, probably along with some chopped onions, until lightly browned and almost completely dissolved ready for the rest of the ingredients, thereby reducing its potency somewhat.
This weekend there is a garlic festival on the Isle of Wight, as you can smell the farm before you get there, perhaps it is a good thing that both the farm and the festival is over the water! Chocolate in savoury dishes seems to be somewhat more acceptable than garlic ice-cream, or how about a garlic beer .... I leave you for a moment to dwell on these tastes?! 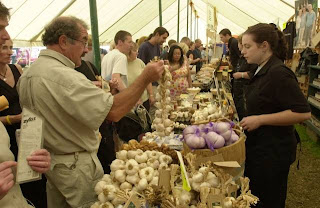 The garlic tent at The Garlic Farm festival
The garlics of today are being searched out in the regions of middle Asia, seeing if true botanical varieties can be found, or new plants. Specialist farms are experimenting with different strains – early purple hard-neck garlic bulbs, pungent Auvergne, the white soft-neck, long keeping garlic (Solent Wight) with its wonderful bouquet, the bland (so-called – but probably from the onion/leek genus) elephant garlic, and the new clumping variety that appears to be closest to the Central Asian wild cultivars of millennia ago.
The good thing about the festival is that it is supported by all sorts of other Isle of Wight businesses: food booths, arts and crafts, entertainment and music stalls, as well as antique vehicles being on show – which will be so helpful in these times as all the monies goes to the island’s charities.

From the front page of The Garlic Farm site
Garlic festivals appear all over the world celebrating both its remedial benefits and its culinary attributes .. even as far as garlic ice cream or a thirst quenching beer, if you so wish!
It’s good to see you Mr Postman, my mother has been very bright recently – even recognising a nurse by her voice (not having seen her for 3 months) and being able to remember her name “MariLou” , though not see her, before MariLou went round the bed to say 'hi'.. my mother never ceases to amaze me! Thanks for coming to bring us another letter ...
Hilary Melton-Butcher
Positive Letters Inspirational Stories
Posted by Hilary Melton-Butcher at 14:08

I love garlic, though I'm quite conscious of not breathing into other peoples' faces after I eat it! I try to eat a lot of garlic because of the health properties, and it helps that it tastes good. Thanks for this post.

HI Daphne .. everyone agrees it has healthy attributes .. and a little goes a long way ..
Glad you enjoyed it - thanks for visiting
all the best
Hilary Melton-Butcher
Positive Letters Inspirational Stories

Garlic adds so much to several things we eat - and I love it! In fact, now I'm thinking about it, and I'm getting hungry!! Although I'll pass on the ice cream...and maybe even the beer (okay...maybe I'll at least try that one!)

Hi Lance .. thanks for coming across .. you can exercise yours off! It can't be past breakfast time yet?

I've always thought savoury icecreams should be nice - but they just don't seem to be around .. once day perhaps.

When you come over for the beer let me know & I'll come and try the ice cream with you?!

It is interesting that we don't know the origins of garlic! Also, that has been used by so many civilizations going back to the Egyptians...maybe prior civilizations used it.

I will pass on the garlic beer...

Hi Pete .. thanks .. yes I hadn't realised that that the onion family would feed the early citizens quite so hugely. Sorry - you didn't like my offer of a garlic beer - quite expensive to get here I realise!