Is this a petrified octopus with tentacles growing skywards ...?

Upside Down Tree, Monkey Bread Tree – the strange case of the tree which grew the wrong way – or did it? The Bushmen believed that the Baobab had offended God and, in revenge, God had planted the tree upside down, or each animal on being given a tree to plant – the hyena decided to plant his the wrong way up .. so the roots waggle in the air.

The world is made up of many strange sites and the Bottle Tree another name for the Baobab, is certainly one of them.

They are iconic trees – you cannot miss them when you see them in the bush. They grow naturally in Mauritius, where six species remain, one native species each in Africa and Australia, however they are now grown in other countries or areas – India and Florida being two.

The undisputed monarch of all the Savannah trees of Africa. Even a single isolated baobab dominates its surroundings with its bulky form and unique character. In winter, without their leaves, baobabs resemble petrified octopuses with tentacles groping towards the sky. The size of the baobab varies as they have the ability to store thousands of litres of water in their trunk (up to 120,000 litres or 32,000 US gallons) to see them through the drought periods.

Surprisingly the tree, in Spring, bears its heavy white flowers at night, probably so the bush babies (nocturnal primates) can benefit from the sources of nutrition, or so that a species of fruit bat is attracted to the carrion scent of the pendulous stamens ensuring pollination occurs.


Almost every part of the tree is useful to man. The young leaves have a high calcium content and can be boiled and eaten as a vegetable, similar to spinach. The pollen of the flowers yields an excellent glue, and the seeds are rich in protein, calcium, oil and phosphates, and are pleasant to suck, or can be ground and roasted to make a palatable coffee.


The fruit pod contains tartaric acid (used in sherbet), while the fruit is nutritious possibly having more vitamin C than oranges and exceeding the calcium content of cow's milk, this is the tree of life .. with many more uses, including making ropes or paper from its spongy wood.

Even the tree itself offers shelter and water for hundreds of birds, insects, small and large mammals of the African Savannah, though until relatively recent times it also offered shelter for humans – the Bushmen of the Kalahari used the trees for shelter; the pioneers used the trunks to live in and as workshops, or hiding places made for local thieves. 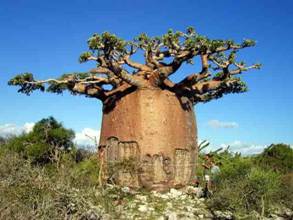 Artefacts have been found in the naturally hollowed out stems dating back hundreds of years, while it is known that the tree hollows naturally from the inside after about 1,000 years but the young baobabs are so unlike their revered elders there was concern that they were endangered, fortunately not so .. and as Hugh Glen, a government botanist, once said “the problem with the baobab is that it doesn’t get handsome until it’s about 800 years old”.

The bigbaobab website states that carbon dating has been used to estimate the Big Baobab’s age at ± 6000 years. To put this in perspective the tree is possibly older than the Giza Pyramids and was certainly here thousands of years before the birth of Jesus Christ. When the first leaves sprouted the Sahara Desert was still lush and green and our Iron Age ancestors were roaming the land.

The farm on which this big baobab is found is now a safari lodge and offers five gorgeous thatched” jungalows” with open air en-suite bathrooms accommodate 17 people. Have a shower under the glorious southern night sky and its millions of African stars! I thought you’d like the description ... especially "jungalows".


Sunland’s Baobab is 22 meters high, and is some 47 meters in circumference. It is still (and is likely to remain so) "the record holder for the species", according to the SA Dendrological Society.

In 1993 the van Heerdens cleared out the hollow centre of the tree, removing masses of compost build up, to uncover the floor about a metre below ground level. In the process they found evidence of both Bushmen and Voortrekkers (pioneers), attesting to the historical importance of the tree.


They squared off a natural vent in the trunk to make a door and installed a railway sleeper pub inside the trunk, complete with draft beer, seats, a music system and space for nearly 60 people. A wine cellar has been installed in a second hollow, with a constant temperature of 22° C, ventilated by natural vents.


Photo courtesy of Barcroft Media and the Daily Mail - Fancy a pint in a bar that is inside a tree? ©

So there we have it a real tree of life .. nurturing us humans probably for over a 1,000 years, nourishing, feeding and watering masses of wildlife from the night time bats, to the tiny insects to the baboons, monkeys and elephants who depend on its fruit ...

... and which will go on nurturing us for many years to come with the authorities of the world anxious to find new remedies and uses from our natural flora and fauna. Welcome to the world of the upside down tree!

Thanks for visiting Mr Postman, my mother always loved this tree and if the pub had been open when I lived there, my mother and I would definitely have been there sleeping under the stars and having a drink in a tree. We have had a good three days when my mother has been awake and interested in being read to .. even today to my surprise, tonight she was asleep: I can finish this before I go out .. perhaps!

PS: the Baobab Fruit: how the Eden Project is supporting Rural Harvesters in Malawi and southern Africa
http://www.edenproject.com/eden-story/our-ethos/baobab-fruit-supporting-rural-harvesters-in-malawi

That is one amazing tree. With so many uses. It is a good thing that they live a long time. Look at all the useful things that come from it. We always learn great things when we visit your blog. Thank you so much. Have a great day.

Hi Dan and Deanna ..it is amazing isn't it - who'd have thought that something crumbling on the inside would offer so much to life - birds, insects, mammals and us humans.

Flora and Fauna have so much to reveal as we are able to research them ..

Thanks for visiting and being here ..
Hilary Melton-Butcher
Positive Letters

The phenomena you share here invite people to question the basis for their assumptions. People can realize beliefs are not grounded in reality, but opinion of what is or cannot be. In truth, beliefs emerge out of fear of being wrong or fear of not understanding. A bumblebee for instance, is not supposed to be able to fly (according to physics). Of course, nobody told the bumblebee and he flies just fine. I respond to your latest input to the remote-influencing post at Dreambuilders Australia and expand on this concept of what is possible or impossible.

Hi Liara .. thanks for being here .. my mother thinks I am mad .. the upside down tree!! Still she laughs and that's the best thing for me!

I'd forgotten about the bumblebee not being able to fly .. I must remember that for future ..

I'll be over to http://blog.dreambuilders.com.au/ to see what you've said re the remote influencing idea ..

It's good to have you here - thanks for visiting ..
all the best for the weekend ..
Hilary Melton-Butcher
Positive Letters

Hi Hilary
I love it, what an amazing tree. And I love the tree house with the family. :-) That is so cool.
Thanks for sharing.
Giovanna Garcia
Imperfect Action is better than No Action

What a fascinating story about the Sunland’s Baobab tree! A tree 6000 years old....talk about a strong tree.

Hi Gio ..thanks for visiting .. It is an amazing tree .. and looks so good .. a fun place to visit, go on safari with trips in the bush and afterwards have a drink in the bar.

Thanks - glad you enjoyed it .. and I always appreciate your comments
Hilary Melton-Butcher
Positive Letters

Hi Pete .. it is amazing that it's still standing .. it's the way it's evolved I guess .. and what I didn't mention is that the tree bark is still 2 metres thick, despite being 'cleared out' in the middle .. all they did was remove the detritus from the centre, which had happened naturally.

As long as the baobab gets water through its roots in the soil .. it's ok .. one very old one near a road, was so trampled that the rain didn't soak in and the tree died.

Glad you enjoyed it .. all the best
Hilary Melton-Butcher
Positive Letters

It is fascinating that the bark is two meters thick! That would obviously pretect the tree from insects and animals.

What an amazing tree! Talk about a survivor!'

Hi Pete .. great to see you back .. I know - still 2 metres thick despite clearing the middle out .. it is a wonderful tree to see - just one of those African wonders ..

A survivor as you say .. long live petrified Octopuses (anglicized version) .. or octopi (Latin = incorrect), or octopodes (as it is not Latin, but Greek from the word "Oktopous") - right well that satisfied this evening's learning from the Economist re plural of the Octopus!!

So thanks for the extra comment .. just what I needed ..