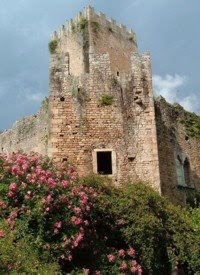 Ancient Italy, family feuds, Marine Republics and the Papacy begin this story high in the hills of Lazio, south east of Rome. Enchanted gardens set in beautiful scenery, being returned to their earthy beginnings – a tale of a garden: a hidden jewel under the Mediterranean sun.

Benedetto Cateani as the newly elected pope, Pope Boniface VIII, in 1294, conferred on his family the fiefs of four hilltop towns: Sermoneta, Bassiano, Ninfa and San Donito – making his family the most notable in Rome. The history of Pisa holds the other part of the Caetani family life in early medieval times. This wealthy family turned their fiefdoms into walled hilltop fortresses, with Romanesque cathedrals and massive castles.

Ninfa – our object of desire! – was a substantial town going back to the times of the Romans, however during the middle ages the town was squabbled over, sacked, beset by malaria and eventually Ninfa was abandoned to the elements and neglected by its aristocratic owners.

Since that time, on the marshy plain leading down to the sea and under the eagle eye of the other more successful hilltop towns, the castle, the fourteen towers, seven churches, town hall, mills and 150 houses of Ninfa have slowly crumbled.

In the last century descendants of the Caetani transformed the town’s ruins into a botanical garden and the garden has now been left to a foundation to run the site in conjunction with the World Wide Fund for Nature.

Natural life has taken over, colouring the ruins, brightening the day with blushes of flowers cascading over low walls, broken foundations, flattened geometry of the old town, growing high into the trees, falling over high battlements. 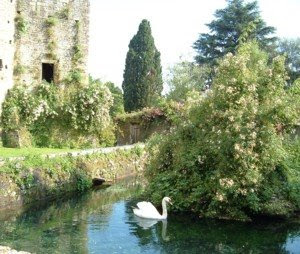 The whole of Ninfa has disintegrated, the whole can still be seen, one could imagine walking through the streets, round the buildings, seeing the smithy, watching the canny pick pockets, smelling the pungent smell of new baked bread, with oils, garlic and olives, men talking in the square – but time stood still.

It is a place for feeling more than seeing – feeling the blood of time since the sacking of the 2,000 souls in 1381, feeling the sense of wholeness for the town that was .. and now seeing it come to life again as a nature reserve: 100 acres of nature reserve, the new lakes, the migratory birds, the owls and rock thrushes in the towers above.

Preservation as is – is the order of the day .. the plants wind over ruined towers and walls, rejoicing in the crystal clear streams and springs that run through giving them life in the damp conditions. Roses scrambling for footholds in ruined archways, the frescoed church wall still standing open to the weather, together with banana trees, maples, slender cypresses and flat-topped stone pines dotted throughout this typical Italian landscape.

The dampness of the location, under the hills facing the coastal plain, has lead to a microclimate of an unusual and unique mixture of species. Ninfa is a landscape of water, despite the spread of centuries’ old sacked building rubble under its evergreen covering, with the clear water running through channels and cascading through races, into iris pools until they team up into the river flowing down to the sea.

The restoration as such has been left as much to nature as can be, not much tidying up has been done, it’s been cleared a bit, new plantings have just happened with no obvious planning – making it such a wonderful natural gardener’s delight. Clematis abound, bignonia, jasmines and honeysuckles clamber up trees and ruins. Self seeding has been allowed to occur with different ‘rooms’ within the ruins – for wild flowers, a grove of Cyprus trees, Magnolias and flowering cherries dotted amongst the green open spaces.

See ancient Italy, a lost garden, smell the scents of Cyprus, old roses, and in May the waft of orange blossom as you wander under the blue skies, and hanging gardens, remembering our troubled past, but what a folly of wonderment for its future – an idyll that will never be lost in time.

Thank you for being here today Mr Postman, my mother, who was a great gardener, will absolutely love this story, so we can talk about plants and gardens, stone walls, cascading waters .. a wonder to bring back some colourful thoughts and scents for us to discuss ..

Wow! what a wonderful place. So glad that we visited today. That is wonderful. The beautiful grounds. We are so blessed to have places like this to see and enjoy.

Hi Dan and Deanna ..thanks for visiting .. yes - it's been a desire of mine to get over and see it - it sounds so wonderful - just a magical garden ..

Yes - fantastic to have botanical gardens ..

We hope that you will get the chance to do that and see this beautiful place in person.

This is so beautiful. It will be amazing to see it in person. It is like a dream land.
Thanks for sharing.
Giovanna Garcia
Imperfect Action is better than No Action

Hi Dan and Deanna .. I too look forward to going to see the beautiful landscape .. set against the backdrop of the mountains .. it does look wonderful doesn't it
Thanks very much for coming back and making another comment ..
Hilary Melton-Butcher
Positive Letters

Hi Gio .. as you say it looks so wonderful and just leaving a town to in the 1300s to return to the wild, then when found it was revived as a wild botanical garden .. just removing some of those famous blackberries! and tidying some of the runaway plants and weeds ..

Something about castles inspires romance, adventure and fairytales. People often forget the practical side of upkeep and the effects of weathering.

I recently heard a very intriguing story about how a 40 something year old bachelor inherited a multi million dollar historic manion and property in disrepair. He hired someone to help him develop a business plan and transformed it into a delightful cooking school and upscale inn in order to pay for renovations and restore it. The bachelor went through his own transformation process as well. Neat to learn about his ancestors as well as steps requires to change.

Hi Liara .. it was interesting what the article said about what we'd do with something like Ninfa in the UK .. tidy it up, make sure there were masses of signs telling us not to go here or thither .. or 'toilets' 'shop' 'exit' ' keep off' ... Ninfa is left to speak out to you for itself .. not like our English control of our spaces ..

it is the all of those a castle, romantic, adventurous and fairytales now from distance past .. as you say we do forget the practical side of upkeep and weathering ..

It is interesting to see nature take over after man has left! Currently, it is such a beautiful place.

Do you know why the city was never re-inhabited after Pope Clement VII destroyed the town? Were the people massacred?

Hi Pete .. thanks .. it just looks so wonderful, having been tidied around, but essentially left to itself.

The people were massacred in 1381, when the town was sacked, it was situated at the edge of a malaria plain .. and if the main trade was on top of the mountains, where the thriving towns were .. then it would be off route .. other than that til I go I'm not sure!

The water was piped around the town in culverts and they've been used to water the plantings and are used as structures for the plants to grow around.

Thanks for being so interested .. keeps me on my toes!
Hilary Melton-Butcher
Positive Letters