Passing one of Andy Goldsworthy’s chalk stones on the Annual South Downs Way June 2009 from http://southdownsway.com

Toll roads have been around for at least 2,700 years, as tolls had to be paid by travellers travelling between Babylon in ancient Mesopotamia and Susa in western Persia (Iran). Aristotle and Pliny refer to tolls in Arabia and other parts of Asia, for example India, while the Holy Roman Empire was using tolls in the 14th and 15th centuries. 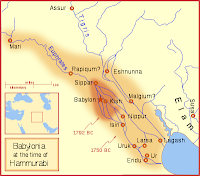 Map showing the Babylonian territory upon Hammurabi's ascension in 1792 BCE and upon his death in 1750 BCE (Ancient Mesopotamia east to Susa, west Persia at northern end of Persian Gulf)

Tolls could be gathered at strategic locations: for example where a Castle had control at the convergence of two river highways – charging for the boats trading up and down; charging at trading post cross roads; or river crossings; or as the Germanic tribes did charging travellers as they crossed the mountain passes.

The term “turnpike” refers to the pike or long stick( or staff) that was held across the road, and only raised or turned aside when the traveller paid the toll, or to the sharpened piked and barred gate that was used to defend against cavalry attack.

In due time the collection of tolls became ‘regularised’ as permanent settlements became more widespread, and trade between localities depended on regular known routes establishing the highways and byways of England.

The Hyde Park Gate in London, erected by the Kensington Turnpike Trust. This was the first toll point encountered along the Bath Road, upon leaving London

Medieval tolls granted under ‘letters patent’ gave the right to an individual, the town, or to ‘the bailiffs and goodmen’ of a neighbouring village to collect the tolls. Pavage grants fell into two categories:

- urban grants (the majority) to enable the streets of a town (or its market place) to be paved;
- while rural grants enabled a particular road to be repaired. These became popular in the 14th century, and were largely used for the great roads radiating from London.

Tudor statutes then placed the responsibility on each parish council to maintain all its roads. However this arrangement was adequate for the roads that parishioners used themselves, but proved unsatisfactory for the principal highways that were used by long-distance travellers and waggoners.

Map of the Turnpike Tollgates in London 1801

During the 1600s this piecemeal approach to road maintenance caused acute problems on the main routes to London, the increase in the use of heavy carts and carriages led to serious deterioration of the tracks and could not possibly be remedied by parish statute labour.

An Act of Parliament was introduced in 1663 coordinating toll collection through the introduction of tollgates on major routes. The birth of the Turnpike Trusts had begun. These Trusts were bodies with powers to collect the tolls for maintaining the principal highways in Britain.

From the 1750s, Acts required trusts to erect milestones indicating the distance between the main towns on the road. Users of the road were obliged to follow what were to become the rules of the road, such as driving on the left and not damaging the road surface.

Trusts could take additional tolls during the summer to pay for watering the road in order to lay the dust thrown up by fast-moving vehicles. Parliament also passed a few general Turnpike Acts dealing with the administration of the trusts and restrictions on the width of wheels – narrow wheels were said to cause a disproportionate amount of damage to the road.

At their peak in the 1830s, over 1,000 trusts administered around 30,000 miles (48,000km) of turnpike road in England and Wales, taking tolls at almost 8,000 toll-gates and side-bars. The concept of the turnpike trust was adopted and adapted to manage roads within the British Empire and the USA. 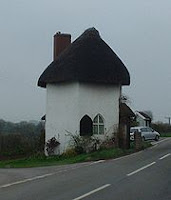 By the early Victorian period toll gates were perceived as an impediment to free trade, while the final straw came with the spread of the railways and the turnpike trusts were dissolved.

The Round House (Old Toll House) at Stanton Drew

The legacy of the turnpike trust is the network of roads that still form the framework of the main road system in Britain. In addition many roadside features such as milestones and tollhouses have survived.

Road and bridge tolls around the world are now the norm .. however a few of the interesting toll roads from the past are these:

One of the first U.S. toll roads, the Long Island Motor Parkway (which opened on October 10, 1908) was built by William Kissam Vanderbilt II, the great-grandson of Cornelius Vanderbilt.
In the rainforest with packhorses: The creb track, Australia 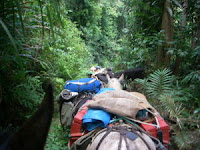 The National Horse Trail is the longest marked horse trail in the world, stretching 5,330 kilometres from Cooktown in far north Queensland, to Melbourne, Victoria. This trail runs the length of the rugged Australia's Great Dividing Range on old coach roads, stock routes, brumby tracks, following rivers and fire trails, through rain forest off Queensland to the alpine mountains of New South Wales and Victoria. National Horse trail" is an Australian icon. 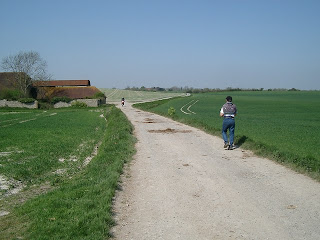 The 80 mile coach road from Winchester to Eastbourne - experience some of our finest countryside between Winchester, first capital of England, and the white chalk cliffs of Eastbourne. If you are interested in great views, attractive wildlife, visible prehistory, fine pubs and pretty villages, follow the South Downs Way, or if you feel like visiting you’ll find me here?! Welcome to you all .... one day I'll come and visit the Creb track, I've been on the Long Island freeway, and Babylon .. well we'd all like to go I expect, what a wonderful part of the world - let's hope we can again one day .. to coach roads everywhere ..

Dear Mr Postman I guess you know a lot of these local routes .. the chalk downs are so striking with the falling away of the cliffs at Beachy Head and it is quite amazing how many visitors we have who walk the Downs and follow these old coach roads ...

You have travel alot and I can't wait for you to go the Creb Track. I am sure you will have a lot of story to tell.
Thanks,
Giovanna Garcia
Imperfect Action is better than No Action

Hi Gio .. yes I've seen a bit of the world - lots to get to. The Creb track looks really interesting .. Australia has lots of tales to tell, all pioneering stories and history of the lands .. as have all countries - it's just we relate to the English world.

Thanks for visiting .. have a good Friday and weekend ..
Hilary Melton-Butcher
Positive Letters

Tolls have not always required exchanges of money. Bartering has also been used as an effective means to obtain passage. The avid traveller discovers the nature of tolls that present is not always anticipated. This reminds one a journey is never simply a physical one, but also involves shifting awareness on spiritual, emotional and other levels. We are reminded existence is an ever-evolving adventure involving uncertainty. This prompts development of resourcefulness, courage, versaility and other useful skills.

Hello Hilary,
Just an other way to tax and get more money from people. Thank you for telling about toll roads. It is fun to travel to different places and see different things. Thank you for your post.

Hi Liara .. you're right .. bartering I'm sure occurred too in those ancient days; and now almost certainly does.

As you say we're thinking differently and we all need to do that all the time - and I'm pleased we're developing resourcefulness, courage, versatility and other skills - good to learn.

Hi Deanna and Dan - yes tolls exact cash from us ..but they can make the journey quicker .. well round London and over the Thames they can .. they can also make it worse - blockages etc.

In the old days the coach roads at least kept our lines of communication open and developed the networks of today - well all but the motorways and highways ..

Quite fascinating information about toll roads...it is interesting that it is an old idea rather than a new one!

Hi Pete .. thanks ..it is interesting to learn where things have come from .. and to think that tolls areover 2,700 years old ..

Thanks for visiting .. good to see you
Hilary Melton-Butcher
Positive Letters