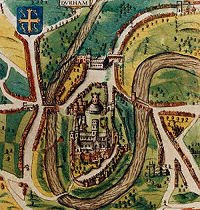 Imagine a field of gently waving green barley one day happily growing in the English summer, the next suddenly becoming a rather large corridor of mud. The city of Durham found itself with a mini grand canyon to its east The torrential rain during the night caused a wall of water to build up determined to find the shortest route towards the river, just simply by moving the agricultural soil to the side, then proceeding to cut down into the river sediments below.

Over three inches of rain had fallen on ground already saturated by excessive rains over the previous ten days, so on that night the torrent built up and thundered its way towards the sea, scouring the land as it took a shorter course through the flood plain. 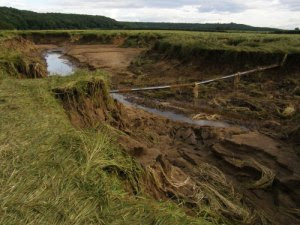 An amateur photo from ukweatherworld.co.uk showing a close-up view of the new canyon

When the River Wear reaches the city of Durham it passes through a deep, wooded gorge, from which several springs emerge, historically used as sources of potable water, so the landscape has a very low water table and is prone to land saturation. The river ever evolves over the flood plain , naturally migrating across it.
The wooded riverbanks of the Wear as it flows through Durham 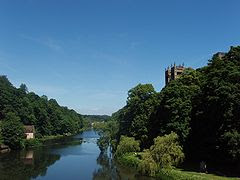 Durham city itself is built on a sandstone bedrock peninsula within an incised meander of the River Wear, providing an ideal defensive enclosure – so essential to early occupiers in Saxon and medieval England. The Norman Cathedral and 11th century castle were built on this high fortress promontory to provide sanctuary for the tombs of Saint Cuthbert and the Venerable Bede both buried on this land by their guardian monks from Lindisfarne, also known as Holy Island.

The ‘great deluge’ forced a gully two hundred metres long, thirty metres wide and nearly five metres deep, the agricultural topsoil and river sediments underneath were swept into the River Wear and on out towards the North Sea. Now the waters have receded it is thought probable that the deluge found an old river course, pushing the barley plants, earth and silts to one side or took the balance with it as the force of the water rushed on following the line of least resistance.
Google Maps image, retrieved July 24, 2009, showing the field with the approximate position of the new canyon. 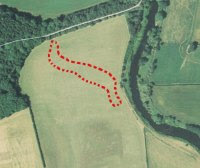 I wonder if all those 8 billion years ago the Grand Canyon started life as a thunderous roar before slowly cutting down through the rock stratas, while the continents pushed and pulled each other creating unexpected fragmented earth, eventually crafting our world as we know it today – but which forever ebbs and flows with the suns, moons, seas and rains .. perhaps that wondrous space evolved thus?
Noon rest in Grand Canyon (Marble Canyon) second Powell Expedition, 1872 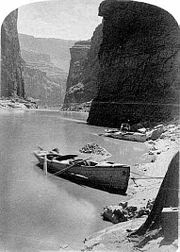 We have such wonderful names for our places in England, when I was researching our mini Grand Canyon I found the Cow Green Reservoir (and yes, Durham does have a cow link! - the Dun Cow legend), Cauldron Snout falls and along the high Pennine moors to magnificent inland views down High Cup Nick and across to the Lakeland Fells. On top of that most of this descriptive passage came from the RaggyLads Walking Club – so thanks to them and for the picture.
Following their instructions for the walk, which we will not do here, but we can take their description on board, as we walk along we pass old lead workings, military activity (when the flag is flying), then rise above Maize Beck, before descending towards its banks again and crossing over (NB: be aware of the beck in spate). At this point it is easier to climb up the western side where the path is clearer, until at last you reach the very edge of High Cup Nick to see one of the wonders of Britain.

RaggyLads describe it as "a horseshoe shaped hole in the ground, but what a size, and what views from the top. The Grand Canyon it is not, but it is not bad all the same and well worth the walk out and the return." The picture is so enticing .. and as you see the Grand Canyon is mentioned here too.
High Cup Nick taken by one of the RaggyLads Walking Club 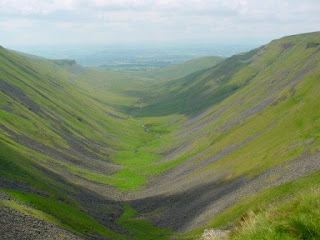 So there we have it .. a mini Grand Canyon made in hours – will it stay, what will they do with it, THE Grand Canyon made over millions of years, or High Cup Nick, which is pretty pretty – we live in a wonderful world, would you not agree?

Dear Mr Postman I hope you got back before our torrential rains came? So far it hasn’t been too bad here .. but reading The Cornish Riviera book to my mother – travelling along the railway, following every tributary, finding every Holy Well, visiting every Church, Chapel, and every ancient stone age monument from Stone Age Man to the Middle Ages I feel well travelled and somewhat sore throated – Mum thoroughly enjoyed it and that of course is the main thing, til tomorrow ...

It does make you wonder how some of the things on this earth were made. The Grand Canyon being one of them.Such wonderful sights to behold. Thank you for sharing about this wonder of the power of nature. Have a good day.

Hi Dan and Deanna .. it does too .. how it all happened but it has left us a wonderful world. The power of nature is still happening .. we've still got masses of black clouds around! Glad you enjoyed the post .. you too have a good day ..
Hilary Melton-Butcher
Positive Letters

I love water, even as I'm awed by its raw force. The Grand Canyon must have been quite scary at some point! I liked hearing about the quaint English names of the various gorges. Again, another informative post.

Also, I may be behind the times but I just noticed you changed your blog's tagline or blurb - the bit just beneath the blog name. I like it!

Hi Daphne .. thanks so much .. yes water can be so forceful. As you say the quaint English names always seem to amuse us ..

You're not behind the times at all .. I think I cahnged things a bit in May when I was over in San Diego .. and put back the explanatory bit and took out the initial "Mr Postman" bit as it came up as the first para in Facebook .. which wasn't much help .. so Mr letter delivery man gets thanked at the end!

All I can say is - how observant you are .. thanks for the support .. much appreciated ..

All the best - must dash now!
Hilary Melton-Butcher
Positive Letters

Hi Hilary
I always amaze me to see how water shaped places like Grand Canyon and all.
What is more amazing is how you find all of that information, with maps and all. Hilary you are out of this world.
Thanks for sharing.
Giovanna Garcia
Imperfect Action is better than No Action

Mother nature has some very powerful forces. When I lived in Texas it would rain so hard and fast that there would be flash floods....bridges, cars etc. would be washed away at a moments notice.

Sounds similar to what happened at Durham! Thanks for the interesting post!

Hi Gio .. thanks for those very kind comments .. when I can easily find appropriate photos I'm over the moon! So thanks for appreciating them .. Wikipedia is the source of much .. thank goodness, and high praise to Wiki.

I just loved the thought that a wall of water could have appeared and blasted through the earth to start the Grand Canyon, or other canyons .. and to see a mini version .. sort of puts it in perspective.

Hi Pete .. thanks - flash floods are pretty frightening .. and guess yours in Texas would be a bit worse than here .. but it was just so interesting to see it in such a small space - so one could visualise the whole .. usually flash floods just cause terrible damage all around.

This was strangely specific .. but I'm quite certain not unusual ..

Thanks for being here .. Texas floods are something I don't want to be in ..!

The amazing force of water! It's incredible.
We've yet to visit the Grand Canyon, but plan on taking a family trip when the kiddos are older. We look forward to it's marvelous sights!

Yes please! ... I'll be there .. just give me a tweet ..?! I was just staggered at this mini grand canyon, but the real thing must be absolutely amazing to see .. one day ..

Thanks for the thoughts = yes!