Swan Upping – that ceremonial census for swans! Going right back to medieval times, the nobility and royalty who held power were also entitled to any abundance, any ease of pickings – hence poaching of game from the forests or lands was not tolerated, meat was ‘wealth’ and not eaten by the poor, except on high days and holidays.
Swans and cygnets c/o The Vintners' Society
Swans and cygnets were a common delicacy for royalty and formed a major course in all royal feasts and banquets. ‘Swan Upping’ is a 12th century ceremonial term for this practice of establishing swan numbers and ownership.

“Swan-Hopping” is another name and an interesting article appeared in the New York Times of 28 August 1877 by the aquatic correspondent of a London newspaper on the subject of Swan Upping, giving full details of the whole process.
In the past the beaks were marked with nicks to show who owned each swan. The swans on rivers and open waters all belonged to the Crown, however swans on private land, lakes and ponds were the property of that landlord, unless they moved to rivers and open water when they then belonged to the Crown. 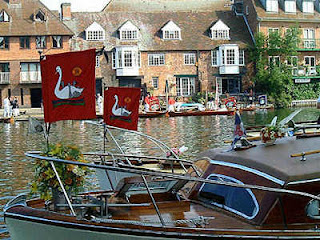 The Swan Uppers set off from Windsor
The original custom of keeping swans is not known, however the first written record dates back to 1186 describing the birds in a captive state, so the custom may already have been well established. The identification mark on the beak establishing ownership, dates back to an early record in 1230.

Only three bodies apart from the Crown retain their rights to own swans; these are the Ilchester family, who own a breeding colony of swans at Abbotsbury in Dorset, and two Livery Companies (their rights being granted in the 15th century), the Vintners and the Dyers, who maintain the tradition of Swan Upping on the River Thames, where today the emphasis is on conservation. Swans in other parts of the country are ‘free as the birds’.

The census now takes five days covering the 79 miles (127 km) between Sunbury-on-Thames and Abingdon, Oxfordshire; the Swan Uppers, dressed in uniforms, set off in six traditional wooden skiffs (two each for the Crown, the Vintners and the Dyers).

Both Guilds existed in the 12th century, the Dyers’ was a trade association for members of the dyeing industry and is now a charitable institution, while the Worshipful Company of Vintners gained the monopoly over wine imported from Gascony, France and had the right to sell it without a licence, becoming the most powerful company in the wine trade.

By 1378 the office of ‘Keeper of the King’s Swans’ had been created and a century later a document entitled “The Lawes, Orders and Customs for Swans” was published, enforcement being carried out through special ‘Swan Motes’ or ‘Swanning Courts’.

This swan marking became a custom, as ownership of the birds needed to be established and be readily identifiable, these marks were granted by the Royal Swan Master, and entered in a Registration book; by the 16th century there were as many as 900 unique marks recorded.

The Swan Upping Fleet prepare to depart from Eton College boathouses
The skiffs are decked out in full regalia and fly the Swan Upping flags and pennants; the Queen’s Swan Marker and the other royal officials wear traditional scarlet jackets making them easy to spot, the Swan master of the Vintners and Dyers wear white and blue respectively. This year the Queen will be attending the ceremony, and as the skiffs pass Romney Lock, the lock nearest to Windsor Castle, it is traditional for the Swan Uppers to stand in their boats and drink a toast to the Queen to salute ‘Her Majesty The Queen, Seigneur of the Swans’.

The Vintners' Banner and the blue Dyers' Banner
Conservation and scientific observation are the main objective for this traditional ceremony in the 21st century, with the swans and cygnets being weighed and measured, their health assessed and checked over for injuries, most commonly caused by fishing hooks and lines. The swans will have their rings checked, while the new cygnets will be ringed so that accurate identification records and numbers are maintained.

The birds are similarly protected in Hamburg: in 1264 the senate of Hamburg enacted a law to protect the swans of that city. Hard punishments should be given if a swan was beaten to death, insulted, shot or eaten. A popular belief is that Hamburg will be free and ‘hanseatic’ as long as swans are living on the Alster river, which flows into the Elbe. A similar ceremonial process is performed on the Rideau Canal in Ottawa (completed 1832), no doubt having its roots in British traditions. 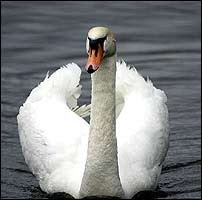 These graceful mute swans have long been revered across the world, and are found in mythology, fairy tales, literature, music, poems, art, emblems and traditional ceremonies in places far and wide, and it is good that the example of Swan Upping is actually educating the children and peoples of this country on the necessity in conserving and protecting our wildlife.
Thank you for coming today Mr Postman, this ceremony is one that I'm sure my mother will be interested in .. it's always good to protect our heritage, and conserve our wildlife.
Hilary Melton-Butcher
Positive Letters
Posted by Hilary Melton-Butcher at 10:54

Hi Deanna and Dan .. thanks for visiting. The history of our world is opening up my eyes to all kinds of things. Glad you enjoyed the swans royal protection ..

In parts of Australia, black swans exist. Other places in the world may also have them but I had not seen them in North America.

Hi Liara .. you're right and they were introduced into NZ, but don't exist in the northern hemisphere. They have black necked swans in S America.

When I next do swans - I'll bring in a few other things .. eg the black swan, and swans form a major part of heraldry ..

I agree with Deanna...that the swans are a beautiful species of birds.

The comment from Liara about the black swans was very interesting. I would like to see a post with the black swans...they are probably just as beautiful!

Hi Pete .. that might make my life easy today - had a minor blip with my mother .. so somewhat disorganised ..

Glad you like the black swans .. and they are quite as beautiful.

Thanks for commenting .. great to see you here ..
All the best Hilary Melton-Butcher
Positive Letters