Sgt Podge, Buster, Altai, Charlie .. who are they? 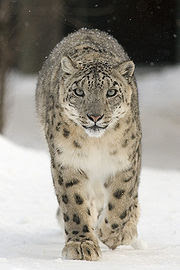 Chauffeur cat, spider style cat, white panther, tiger cat – who matches who above .. can you guess? Two of these were stories from 2007 and absolutely amused my mother, we laughed and discussed their antics and they still amuse when I re-read their sagas. The two new ones she would love too, and she will enjoy the pictures.

We used to have cats at home – just moggies – but they were great company for us children and went with my mother, when she went to live in Cornwall. I’m afraid their names didn’t do them justice .. heaven help any child I might have had .. if the cat could only get the names ‘Peedle’ for the slinky smooth jet feline, and ‘Boot’ for her black and white kitten?

A full size adult Snow Leopard in the wild

So tales of wandering mogs, or special species will always bring a smile and an interest in life for my mother. The first is the newest and shortest story – the joy of birth in April at Berlin Friedrichsfelde Zoo – a Panthera Uncia, sometimes known as “ounce”, a male snow leopard cub making his sleepy appearance for the world to see. 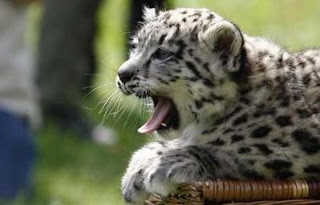 Snow leopards are part of the big cat group and are native to the mountain ranges of Central Asia. They tend to be smaller than the other big cats – tiger, lion – see my recent post, leopard or jaguar. The birth of a new cub, even in a zoo, and there are over 600 snow leopards in zoos around the world, including one in San Diego zoo has to be seen to be a good thing, as zoo conditions are constantly improving.

Our second cat in a flap ... perhaps Buster should be our first as he is the largest of the big four cat group .. is a rare white Bengal tiger. Buster, as he is known, was born at the West Midland Safari Park here in the UK in June 2007, but after his mother rejected him Buster was wrapped up, bottle fed, taken home and introduced to Lucy’s four domestic cats (Bubble, Pepper, Sylvester and Oreo). He became house-trained, and if he decided he wanted a stroll would push through the cat flap and wander round the conservatory! 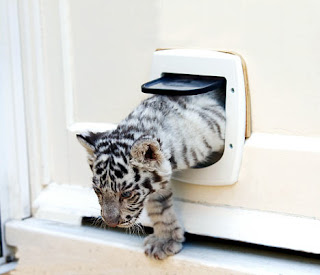 White tigers, whose colour is caused by an usual genetic combination and are not albino, are thought to be extinct in the wild, the last one having been sighted in 1951. There are still several dozen in zoos worldwide. Buster, who now has outgrown his human home is back with the other Bengal tigers at the safari park. They too are extremely endangered being as their only predator is man, and man is encroaching on their habitat.

Charlie our Spider cat(a ginger and white mog) just gets plain bored hanging around waiting to get in – I can understand that .. but he lives on the first floor and just decides waiting is not for him .. so round to the back he goes and shimmies up a rough stone wall, how he gets over a small overhang ledge avoiding his two co-lodgers peering down as he clambers up is subject to conjecture! He miaows and waits to be let in!

Our fourth tale, the Norwegian forest cat, has perhaps the best story and the best chauffeur in England! Sgt Podge was a rescue cat living happily for ten years with four other cats and two dogs – he’d had a dodgy beginning .. being called ‘Poppy’ before the vet told the family otherwise – they renamed him Podge, but their son decided Sgt Podge sounded much better for a black forest cat.

Sgt Podge suddenly got a nightly wanderlust and went missing. An SOS went out, the RSPCA informed, neighbours rung to see if anyone had spotted the Sergeant. An elderly woman who lived two miles away answered the call saying that a cat answering Sgt Podge’s description was with her.

Absolutely correct, it was Sgt Podge, who was collected and brought home. Within days the lure of the forest called again, and he was with the elderly woman again. A routine soon became established after the owner dropped her son at school in the morning, she calls round, opens the door, up jumps Sgt Podge from the pavement and he’s chauffeured home. 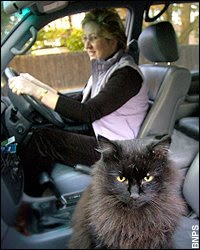 Sgt Podge always waits in the same place, if it is raining - hands are clapped and Sgt Podge appears from under a hedge. There’s no let up .. this is a 7/365 job .. weekends and holidays included – one of their neighbours does it they go away on holiday!

Sgt Podge has definitely got the best of both worlds .. on top of that when he gets home he’s allowed to spend much of the day asleep by a warm radiator .. where did I go wrong?! His family think he’s a bit off the planet, but Podge is Podge – he is a real character.

A cat on a basket, a cat in a flap, a cat on the tiles and a cat on a balcony .. what a mix .. two white panthers – a Bengali and a snowy one – and two mogs .. one from the Norwegian forests and I suspect just one orange and white mog from ‘up the road’ .. but stories to pass on and amuse ..

Dear Mr Postman my mother enjoyed yesterday’s story reminding her of our youth .. rather too long ago .. now reminders of Peedle and Boot .. still they were fun cats – thank you for visiting ..