The home of the famous curling stone granite, “ailsite” is Ailsa Craig, a unique uninhabited island off the West Coast of Scotland, across the water from where the 2009 Open Golf Championship is being played. Known in Gaelic as the Fairy Rock, this spectacular chunk of pure granite is one of Scotland’s most famous landmarks.

Ailsa Craig, situated about 10 miles (16 km) off the coast, is the dome shaped island rising 1,110 feet (338 m) straight up from the waves below, consisting entirely of a volcanic plug from an extinct volcano that might have been active about 500 million years ago. 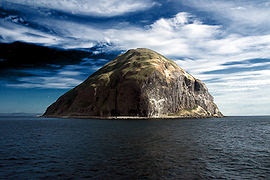 Ailsa Craig from the Waverley paddle steamer
The Scots believe that the granite produces the best quality curling stones as they come from the “ailsite” granite, which has a very low water absorption, which prevents the action of freezing and melting water from eroding the stone. There was a small quarry on the island to mine this rare type of micro-granite with riebeckite (“ailsite”), but it was hard, hard work. The floor of the Chapel of the Thistle in St Giles Cathedral, Edinburgh is made out of Ailsa granite.
The game of curling is thought to have been invented in late medieval Scotland with the first written reference to a contest using stones on ice, coming from the records of Paisley Abbey in February 1541. In the early history of curling, the rocks were simply flat-bottomed river stones, in the late 1700s the weavers relaxed by playing curling matches with the heavy stone weights from the weavers’ “warp beams”, fitted with a detachable handle for the purpose. Many a wife would keep her husband's brass curling stone handle on the mantelpiece, brightly polished until the next time it was needed! 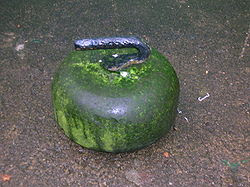 Old Curling Stone
Two paintings, both dated 1565, by Peter Bruegel the Elder depict Dutch peasants curling – Scotland and the Low Countries (Holland, Belgium and Luxembourg) had strong trading and cultural links during this period, which is also evident in the history of golf.

It is accepted that the modern game of golf developed from its Scottish roots, but that stick and ball games were evolving in Europe during the middle ages, as is evidenced through records in the Netherlands, but probably had been played in China 500 years earlier in the Southern Tang Dynasty (935 – 975). It is likely that Mongolian travellers brought the game across Asia, into Europe from where due to these strong trading and cultural links the game moved into Scotland in the late Middle Ages.

The links at St Andrews – the Royal and Ancient Golf Club – occupy a narrow stretch of coast and originally the players established a trench through the undulating terrain, playing holes whose location was dictated by topography. The course featured 11 holes from the club house end to the far end of the property, so a game would consist of 22 holes. Some holes were deemed too short and the course was altered to nine holes out and nine played back in, establishing St Andrews as the golfing capital with all other courses following suit, and the 18 hole course is played to this day. 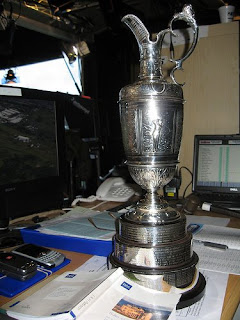 The British Open Championship is the oldest of the four major championships in professional golf, and is the only one played outside the United States. Here in the UK it is played on one of nine historic links courses usually in Scotland and England, once having been played in Northern Ireland.

This Ailsa Golf Course, named after the third Marquess of Aisla, who originally owned the land, has been the home to three Open Championships. The course flanks the coast with magnificent views across to Aisla Craig, the harsh Atlantic wind providing tough cross wind conditions, sandy hillocks, craggy rocks, sea grasses for the rough, narrow fairways all lead to a difficult and treacherous course for those intrepid golfers a little off their best. 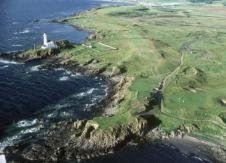 Turnberry Golf Course with the Lighthouse (1886)
The 9th hole plays along a stony ridge on the edge of the sea, the landmark lighthouse casting its shadow over the 13th century ruins of Robert the Bruce’s Castle, the real birthplace and boyhood residence of Scotland’s hero King, the turning point for the back nine. The ruined Castle has been affected by actions of centuries of severe weather and erosion by the sea, leaving little more than its lower vaults and cellars intact, though the lands show a castle fortress of great size and strength, with perhaps a harbour built into the caves below.

So today we have the modern game of golf, the Olympic Winter event of Curling and the marine navigational hazard of this magnificent granite outcrop home now to returning sea birds, including puffins, a colony of grey seals as well as the occasional whale, and more commonly large basking sharks, which have worked their way up the coast of western Britain to feed on the plankton bloom which spreads profusely in our warmer summer months, all inextricably linked with this Scottish coastline.

So who will lift the Claret Jug tomorrow in front of the distant, but daunting, granite plug out at sea, under the setting sun against the ocean?

Thank you, Mr Postman, for being here today .. my mother will enjoy this letter, she was noticing how blustery the wind was – the flag poles were bouncing around in the holes – and she spent some part of the war in that part of Scotland; I hope she will enjoy watching a little more tomorrow – small pleasures are a treat – for both of us – and it’ll be good to sit quietly with her to see her enjoy the views ..

Hi Hilary
I wonder if you know about the past few days in my house...it was all about the Claret Jug. It would be something to see it in real life one day!?
Thanks for sharing.
Giovanna Garcia
Imperfect Action is better than No Action

Yes Gio .. this is for you and the family!!! Pity about Tom Watson ..would have been a great story .. It would be a wonderful outing for you all in due course, when little legs can walk 18 holes! x 4 days!! Wrap up well ..

Hope you enjoyed the weekend - I saw Jim Nantz being interviewed (CBC Sports News) he was obviously enjoying his time here ..

All the best and thanks for being here ..
Hilary Melton-Butcher
Positive Letters

Really enjoyed your post about Ailsa Craig. I know about curling stones but you enlighted me on where the granite was mined. Ailsa Craig must be a very interesting place.

The information on the Claret Jug was quite enlightening. Thank you for the post!

Just back from holiday, so I am trying to catch up! Best Regards

Hi Pete .. excellent .. and you knowing about curling stones is interesting!

Glad you enjoyed the Claret Jug info .. I too was quite surprised.

Good to have you back and hope you had a good time and feel relaxed ..