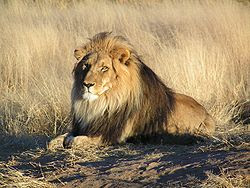 Who used to wander the world as the most widespread large land mammal after humans as the King of the Beasts? The lion. That magnificent of beasts ranged in most of Africa, much of Eurasia from Western Europe to India, and in the Americas from the Yukon to Peru up until the late Pleistocene period, about 10,000 years ago.

Their distribution now, apart from a few hundred in Asia, is limited to the savannah and open bush country south of the Sahara, where they have not been hunted to extinction. I have seen prides in the southern African countries, where they are more protected; and back in the late 1970s when I visited Zimbabwe, when life may not have been perfect, but it was still good and opportunities were there for all to take advantage of, I visited a private farm, where they also raised injured birds and animals. 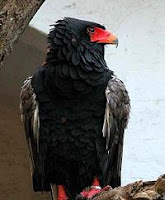 It was a real privilege to walk their lands with a cub in tow (under a watchful owner’s eye too, I might say!) .. as it trotted along with us, rolling over occasionally for a tummy rub. They had baby elephant as well, and a bateleur (which made a huge impression on me: a magnificent bird) – a medium sized eagle, which is probably the origin of the “Zimbabwe Bird”, their national emblem, whom they were raising back to full health.

Lion is one of the four big cats in the genus Panthera and is actually the second-largest living cat, after the tiger; the other two big cats in this group are the panther and the leopard. The lion usually catches its prey, using strangulation to kill it; they prey on ungulates (hoofed animals: giraffe, zebra, impala (antelope), but also kill any animal they can overpower, even hyena or cheetah, and on occasion, if the need arises, eat locusts, termites and carrion. 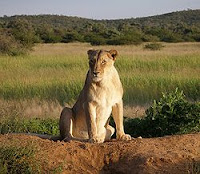 They are usually nocturnal and in the heat of the day lie up in the shade of trees, long grass or thickets of bush and may spend as much as fifteen hours in twenty four sleeping (wish I could!! – well at the moment I’d like to!)

Lionesses form the stable nucleus of a pride, the average of which is eight to twelve in number, while the males move quite regularly from pride to pride. Fights for possession of a pride and the right to mate are vicious. The displaced males form small groups, or become nomadic loners.

White lions owe their coloring to a recessive gene; they are rare forms of the subspecies Panthera leo krugeri

There is a white lion, which is not a distinct subspecies, but a special morph with a genetic condition, which causes paler colouration akin to that of the white tiger; the condition is similar to melanism, which causes black panthers. (They are not albinos, having normal pigmentation in the eyes and skin).

When I was in Zimbabwe we went to the most uplifting of outlets in Bulawayo – the Jairos Jiri shop. Here I bought four very large prints of African animals – a heavily maned lion – drawn full on, three zebra scattering in the ‘veld’, a crouching leopard ready to pounce out of the picture, and a huge bull elephant walking straight towards me (even today) – all black and white prints, as are a great deal of my pictures around the house .. only 80+ - thank goodness I found a house with high ceilings?! The lion is not a white one, but my elephant is a white elephant .. just a teaser, a story for another day!

The Jairos Jiri Association is a philanthropic organisation set up in 1950 in Bulawayo, Rhodesia (now called Zimbabwe) to support and train disadvantaged people. The founder, Jairos Jiri, using Christian principles, wanted to help individuals who previously had been marginalized and rejected.

Initially the association supported arts endeavors and training and set up craft outlets selling tourist souvenirs, such as carvings, paintings, tiles and furniture. In the 1970s legal representation and affiliate support groups were founded in the UK. Jairos Jiri Associations now house the disadvantaged, support musical and dance groups, and are a powerful advocacy for those who would otherwise have no voice in Zimbabwe.

The Lion Capital of Asoka, originally erected around 250 BCE atop an Ashoka Pillar at Sarnath, is the national emblem of India

The King of Beasts is not named in light jest – he has a history, a long history in culture, in heraldry, in symbolism ... the striding lion of Babylon, the king of the beasts has been a popular symbol of royalty and stateliness as well as a symbol of bravery and is featured in several fables of the Greek slave and story teller Aesop in 600 BC. This story of Panthera Leo has many tales to tell.


To round this story off and lighten the mood .. I found two very short poems, which identify very well with Panthera Leo ...

Hilaire Belloc wrote a limerick on “The Lion”:

The Lion, the Lion, he dwells in the waste,
He has a big head and a very small waist;
But his shoulders are stark, and his jaws are grim,
And a good little child will not play with him. 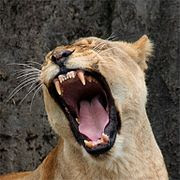 While a lioness such as this has very sharp teeth, prey is usually killed by strangulation

Ogden Nash wrote a little poem on “The lion” too:

Oh, weep for Mr and Mrs. Bryan!
He was eaten by a lion;
following which, the lion's lioness
up and swallowed Bryan's Bryaness.
Mr Postman it is good to see you on this blustery, scudding dark cloudy day .. our King of Beasts would blend in well – I am sure my mother will remember some of her sightings in Botswana, the Kruger Park or during our visit to the Skeleton coast, and she may well remember the Namib lions we saw – they are one of the eight sub-species remaining – who are usually ‘stragglier’ than their southern African neighbours.

Those lions are SO cute! Thanks for writing about them.

Hi Dan and Deanna .. many thanks - glad you love the personal touches. They are certainly wonderful creatures and not to get too close too - so I've been lucky to see them in the wild, from a landrover, and by walking with the cub.

Amazing creatures and they're wonderfully social too ..

Apparently Africa left quite an impression on you! It would be interesting to see all the wild animals in Africa!

I love lions, it is just someting about them. Thanks for the information, I learned a lot from you.
Giovanna Garcia
Imperfect Aciton is better than No Action

Hi Peter .. thanks for that - yes .. Africa gets into your blood, or under your skin. All the bugs and beasts will follow .. as and when - variety is the spice of life!

Hi Gio .. thanks for enjoying the lion story .. I hope you'll enjoy reading them later on too - to someone else?!