The first noun in the dictionary ...? 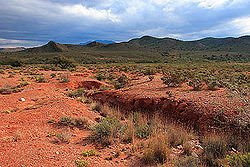 What’s the nosey hole digging, elephant shrew like, earth pig called? Why – an aardvark! Was the name chosen because it enjoys notoriety, since it is often the first noun, and often the first illustrated entry, in many English dictionaries? No – Aardvark comes from the Afrikaans/Dutch for “earth pig” (‘aarde’ earth, ‘varken’ pig), because early European settlers in South Africa thought it resembled a domesticated pig.
Karoo landscape, South Africa

As it happens it is not closely related to the pig; rather it is the sole representative of an obscure mammalian order; nor is it related to the South American anteater, though it shares some characteristics, a superficial resemblance and the name “anteater”, having other names such as antbear, or the Cape anteater.

The aardvark's range in sub-Saharan Africa
This nocturnal, solitary, power animal is capable of digging at great speed to get away or seal a tunnel in times of danger, but otherwise moves fairly slowly. Their burrows can be deep and extensive, have several entrances and can be as long as 13 metres (40 feet); they change the layout of their home burrow regularly and from time to time move to make a new one; old burrows which ecologically are of considerable importance to a wide variety of animals, are then adopted as homes by the porcupines, pythons, warthogs, jackals, hyenas, leopards, wild dogs or wild cats.

Their foraging range is quite large and they have a few temporary burrows spread around to use as quick getaways. The aardvark hunts with its long nose swinging it from side to side to pick up the scent of food. When a concentration of termites or ants is detected, the aardvark digs into it with its powerful front legs, sealing its nostrils to avoid the dust, while keeping its long ears upright to listen to predators, then can take up an astonishing number of insects with its long sticky tongue – as many as 50,000 in one night have been recorded.
Aardvark mother and young

In African folklore the aardvark is much admired because of its diligent quest for food and its fearless response to soldier ants – its long tongue, as long as 30 cm (12 inches), with its tough skin renders the termites’ biting and the ants’ stinging futile. The aardvark eats a fruit known as the aardvark cucumber to quench its thirst. 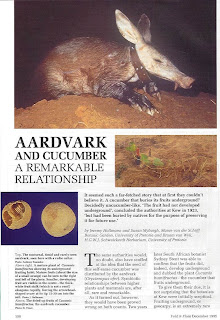 Veld and Flora December 1995, journal of the Botanical Society of South Africa
This “cucumber” surprised Kew’s authorities in 1923 as they could not believe that there is a symbiotic relationship between the aardvark and this fruit. As this is the only plant food the aardvark eats, the seeds are then taken into its burrow, where they sprout from the dung, staying cool underground as they grow, and not being burnt by the hot African sun. When we were in Namibia we saw similar plants – the Namib Tsamma is a member of the pumpkin family, and the Nara Butternut – where the woody rootstocks are kept cool and can tap into the underground water, or stay protected until the rains come.

The aardvark’s main predators are lions, leopards, hunting dogs and pythons. The aardvark digs fast or runs in zigzag fashion to elude enemies, but if all else fails they will strike with their claws, tail and shoulders, sometimes flipping onto their backs to lash with all fours. Their thick skin protects them to some extent.
Termite mound in Tanzania 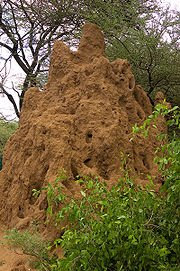 The aardvark lives in sub-Saharan Africa, where there is suitable habitat, such as savannas, grasslands, woodlands and bushland, and available food – termite mounds, or ant heaps. This earth pig whose closest relatives are the extraordinary named mismatches of elephant shrews (who ever heard of an elephant shrew?), the sirenians, hyraxes, tenrecs and that lumbering giant, an elephant.

They are seldom seen, but we are constantly reminded of their presence in the African bush with their large holes, or on occasion a large bump and collapse into a hole – rather an irritating consequence of being on safari! Long live that first noun in the dictionary – the Aardvark.

Dear Mr Postman – this was meant to be a shorter, less complicated post .. so I can do three longer posts a week, and three or four shorter ones concentrating on one subject or just brief overviews. We’ll see! My mother will still enjoy them – as they’ll remind her of our times in Africa ..

So interesting! I didn't really know anything about the aardvark before reading this and it's such a fascinating creature. Thanks for writing about it here!

It is always good to read your posts. Such good information you come up with. Thank you for this one, we learned a lot. Just a note some of the photos did not show up the bottom few.

Hi Hilary
The earth pig look so cute. :-) And they eat the bad bugs...fantastic!
I learn something new today.
Thanks,
Giovanna Garcia
Imperfect action is better than No Action

Hi Dani .. thanks for visiting and glad you liked the info of the little antpig! They are fun creatures .. though I've never seen one in real life .. just the holes!

Thanks for coming across ...
Hilary Melton-Butcher
Positive Letters

Hi Dan and Deanna - so pleased you enjoy the blog and the variant of posts! I've asked via your blog .. if the pics still don't come up .. and which ones ..

Glad you enjoyed the earth pig .. they do look so cute .. I love warthogs - they're my favourite!!

What an adorable-looking animal -- although I imagine watching them slurp insects out of a hole with their massive tongues is a little less adorable! :)

The photos are fine and looking good. Have a good day.

Hi Chris .. thanks for visiting - they certainly are interesting animals and it always amazes me how they have evolved over their lives to take advantage of a niche;

Your description of slurping insects is a good one .. I think I'll move it over to an ice lolly by a little child?!

Hi Dan and Deanna .. thanks so much for keeping an eye open for me - it does seem to be sorted .. patience is a virtue I guess!

We would have never guessed an elephant being a close relative of the aardvark! How interesting! And fascinating!

I'd never seen an termite mound before. Just the thought of bugs makes me itchy! LOL :-)

Hi Roxanne and Hugo .. bugs rule the world .. didn't you know?! The termite mounds are incredible when you see them in the African landscape ..

The elephant and the aardvark ... it's always interested me that connection too .. evolution takes a strange route .. but so interesting to learn about ..