Murder in Mesopotamia, Lawrence of Arabia and Roses ... 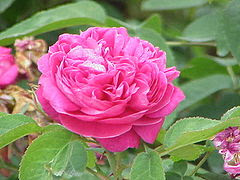 Roses, peonies, lilies and many other modern garden plants began their association with man as medicinal plants; the word botany is derived, via medieval Latin ‘Botanicus’ from the Greek word ‘botane’ meaning herb, so the medicinal concept is implicit. Botany, unlike other sciences, does not have the ending derived from the Greek word ‘logia’.

Fossilized traces of the rose, 35 million years old, have been found in Montana, Colorado and Oregon, growing as far north as Alaska and Norway and as far south as Mexico. No wild roses have been found in the southern hemisphere, all the varieties now found south of the equator have been cultivated.

During excavations in 1922 of royal tombs at Ur, Mesopotamia, Sir Leonard Woolley in charge of an archaeological dig found many well-preserved items, which are now on show at the University of Pennsylvania and the British Museum.

Sir Leonard, during his excavations, found evidence that the Sumerian King Sargon had brought back vines, figs and roses from a successful campaign made 5,000 years ago; this recorded the first relationship of the rose with man. 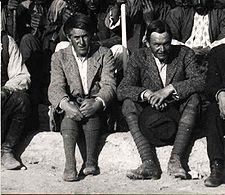 Leonard Woolley (right) and T. E. Lawrence at the British Museum's Excavations at Carchemish, Syria, in the spring of 1913

Two interesting facts connected to Sir Leonard are that Lawrence of Arabia (T. E. Lawrence) worked with him during some of his initial excavations from 1912 – 1914. Later on Woolley had an assistant, Max Mallowen, who, in 1930 after her divorce, married Agatha Christie, the crime writer; the time spent on the dig and the royal spoils of ancient wealth inspired her to write her novel “Murder in Mesopotamia”.

Dust jacket illustration of the first UK edition
It was not the beauty of the rose, however, that was the first concern for man. In the struggle for life the vital search for food and medicine must come first; in this the rose played its part.
Flowers were brought in from the wild, tasted, tested and cultivated. Pliny listed thirty-two medicines that could be prepared from roses. Physic gardens and herbal cures evolved together.

With the cultivation and the testing came the early manuscripts and the printed herbals, and after them the still-room books, with their receipts for ‘melroset’, ‘sugar roset’, ‘syrope of roses’, ‘oyle of roses’ and ‘rose water’. These maybe of old-world charm to us today, but they are of greater importance as records of the earnest search for health through the knowledge of medicine. 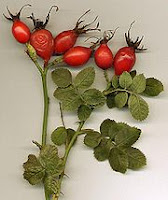 Rose Canina hips (dog rose)
Even rose water, little more than a delightful perfume and flavouring today, was regarded by Gerard (and earlier herbalists) as vital in medicine and only of secondary importance in the kitchen.

The Greeks, Romans and Egyptians all worshipped the rose, using their petals to carpet the floor on occasions of great banquets, to rain petals from the balconies above; to float them in their wine and beer as they believed them to be aphrodisiac. They had already worked out how to extract the perfume from the petals by steeping them in water, oil or alcohol. The term ‘sub Rosa’ comes from the Greeks, who decorated their meeting room ceilings with roses, indicating that everything discussed was to be confidential.

During the medieval period housewives devised new recipes using the hips or petals, concocted pomanders, scented candles, sweet scented posies, these were enhanced by the many species brought back by the Crusaders, from which different potions could be tried and tested.

The striped Rosa Mundi has a story to tell; the emblematic red rose and white rose have marked historically important wars, the red rose, Rosa Gallica Officinallis, became known as the Apothecaries’ rose, the waters, oils, hips and petals all contributed to its history.

The first fully illustrated botanical collection of the rose was completed by Pierre Joseph Redouté from Empress Josephine’s extensive collection at Chateau Malmaison; Napoleon’s wife loved roses so much that she requisitioned his troops to bring back as many different varieties as possible, thus establishing her rose garden.

Rosa gallica purpuro-violacea magna by Redouté
Redouté’s (1759 – 1840) work today is still considered one of the finest watercolour records of botanical illustration. There are many rose gardens today recording and re-cataloguing our rose heritage, continuing the immortalisation and integration of the rose into our daily lives.

The rose has as rich a history as is possible being traced to ancient times, of enormous value to our early civilisations, being fought over, being revered, entering the realms of mythology, symbolism and heraldry, being painted for posterity, and now being revived for a complete 21st century historical story. 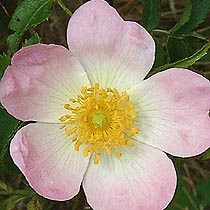 Roses form so much of our lives, we read about them, we write of them, we having tidings of joy at their sweet scent, we hold feasts for them, we use them in our foods, they symbolise love – they hold a unique role in man’s life.
A Dog Rose (Rosa Canina)
Dear Mr Postman a picture of a dog rose - you must pass so many on your round, my mother loved these and we had roses of all sorts wherever she lived and now she loves their scent - it always brings a smile to her face .. thank you for visiting on this bright summer day, it is always good to see you.
Hilary Melton-Butcher
Positive Letters
Posted by Hilary Melton-Butcher at 12:50

Hello Hilary,
That is a lot that we did not know about roses and the origin of them. They are so helpful as ways to smell good and for medicines. What amazing plants that they are. Thank you for this great information.

Hi Dan and Deanna .. thanks very much .. yes - I keep teaching myself things! So I was really interested in how they've affected us over the years .. there's so much more about them and lots of other plants over the centuries.