Do you hit the roof? 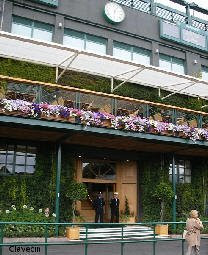 In 1922 when the All England Club moved from Worple Road to its new headquarters in London SW19, Wimbledon was thought likely to become a white elephant! The 12,500 seats were considered far too many .. well look what’s happened in nearly 100 years – the Championships have expanded so much.
Entrance to the Centre Court at Wimbledon - courtesy of argentfabs.com
Now we have a new roof, extra seating increasing the capacity to 15,000, each of which is plush and padded – all this achieved without damaging the hallowed Centre Court turf.

For the engineering “detailists” amongst us .. there’s 1,000 tonnes of steel and fabric, it weighs in at an amazing 3,000 tonnes, cost £80m or so (though Wimbledon are not disclosing the full cost!) and takes 8 minutes to close. The air management system takes 20 minutes to counter balance itself and ten minutes later the court is ready for action. 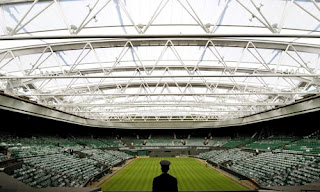 The 5,200 square metre roof, is 16 metres (52.5 feet) high and if during play the ball hits it then the point is lost – in real tennis (the name given to distinguish this ancient game from the now popular lawn tennis) the court has a ceiling lofty enough to contain all but the highest lob shots.
Interestingly the real tennis court is doubly asymmetric - each end of the court differs in shape from the other, and the left and right sides of the court are also different – perhaps that’s why we play the simpler game of tennis: easier rules; simpler construction; less complications all round?! 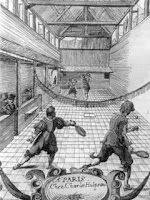 The word “tennis” is thought to derive from the French word ‘tenez’ (take heed) – a warning that the ball was about to be served – evolving over three centuries from an earlier ball game played in 12th century France. Similar games are still being played today, but have evolved into “palla”, “fives”, “handball” or pelota – I remember watching a game of “pelota”, in the Basque region of France in the 1960s.

Real tennis spread across Europe, with the Papal Legate reporting in 1596 that there were 200 courts in Paris alone, near the peak of its popularity in France. (Interestingly after the French Revolution a lot of these courts were converted to theatres!).

Palla eh!" A game of Palla being played in Tuscan, Italy 2001

Early courts seem to indicate that the game was played by monks in the monastery cloisters, before actual real tennis courts were built. Henry V (1413 – 1422) brought the game to England, while Henry VIII (1509 – 1547) popularised it building courts into his palaces and playing with gusto.

Two French kings had actually died from tennis-related episodes – Louis X of a severe chill after playing, and Charles VIII after striking his head on the lintel of the door leading to the court in Amboise, the home of the Royal Court. (Amboise is on the banks of the Loire, and is the place where Leonardo da Vinci lived at the Royal Court of Francis I, and died there in 1519).

In England the sport suffered under English Puritanism, with their aversion to social pleasures and this evangelism spread to Europe, where the game having thrived in the 17th century under the Hapsburg Empire, was largely abandoned.

Real tennis continues to be played today across the world and retains its many complexities, but the French scoring system transferred itself across to the lawn tennis game .. and is how we get ‘love’, ‘fifteen’ and ‘forty’ (shortened from forty five); while in real tennis whoever reaches six games first wins that set, and again is the best of three sets, or on occasions is played over five sets – similar to that played in lawn tennis. (see my previous post on Queen's Club and the development of lawn tennis)

Wimbledon Lawn Tennis Museum. Since the first Championships in 1877, Wimbledon has grown from its roots as a garden-party tournament to a Grand Slam tournament with a following of millions around the world.

In May the new roof was given a rousing roof wetting ceremony in front of 15,000 spectators as a precursor to the 2009 Wimbledon Championships. Bands played, stars sang, the roof closed and the air management system kicked in, before the spectacle began. Andre Agassi and Steffi Graff had flown in from the States, our own Tim Henman and Kim Clijsters from Belgium played some exhibition tennis.
Agassi has always been the showman, his wife less so, but they contrived a real moment of Wimbledon history; the first full-blown kiss on the lips before the first ball of a match was struck.
A mixed doubles match featured the happy couple playing another couple who could not keep smiles from their faces. The forehand from Graf had lost little of its precision length and crispness - at one cross-court exchange with Clijsters “the boys” just stopped and stared.

Sealed with a kiss: Andre Agassi and Steffi Graf share a kiss during the mixed doubles match: courtesy The Telegraph; Photo: Getty Images

But Graf against Clijsters was the high point of the afternoon, for it was clear that the German, who turns 40 next month, had lost none of her court craft. Clijsters said she could not keep her eyes off Graf's footwork, remarking “she still has those legs”!
But where did that smile come from? Never had such a contented wife and mother appeared in whites in the famous stadium, which is as beautiful new as it ever was old.
Wimbledon with its roof has done its job: play continued on Monday, and may well be required for the final day – English weather vagaries prevailing ... this year we’ve been lucky and have had brilliant sunshine most of the time, so the championship officers have not had to hit the roof in desperate rescheduling.

Some wording courtesy of The Times Online.
Thank you Mr Postman - my mother had asked me about Real Tennis and now I can answer some of her questions, while we watch a little of the final matches - sadly without a British competitor .. til next year!
Hilary Melton-Butcher
Positive Letters
Posted by Hilary Melton-Butcher at 15:42

Renovations completely transform a stadium. Your surroundings evolve with you because its your perception determines what you see and experience. It is said that regardless how much you pray for positive change, unless you put your wish into action, changes do not unfold as you would hope.

Hilary,
It is nice to see that tennis goes on and gets even better as time goes by. Thank you for the post.
Dan and Deanna "Marketing Unscrambled"

I thought you would do a post on Wembledon...only the best play there! The men's singles match was incredible!

Hi Liara .. thanks for visiting. I have to say I'd love to go and see it .. well Wimbledon management planned the whole upgrading of the site - new sunken court 2 ... it looked good, but I never saw it closed .. I was up with Mum!

Hi Dan and Deanna .. thanks for visiting - great to see you .. well the tennis last night was definitely excellent! I enjoy the small amount of tennis I get to watch .. the Wimbledon tournament I've always loved ..