Fancy an 11th century delicacy? They're back .. 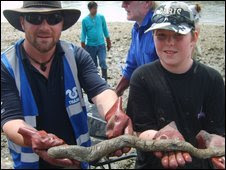 Prehistoric bloodsucker in Thames.
An ancient blood-sucking fish has been found in the Thames by a 13-year-old boy.
It may look like a stick - but Oscar's find is one of earth's oldest creatures (BBC)
The sea lamprey, an eel-like creature with a sucker-shaped mouth surrounded by teeth, predates the dinosaurs.
But they only venture into fresh water to breed if it is very clean, which is why experts said Oscar Bridge's find is significant. In the 1960s the Thames was so polluted scientists declared it "biologically extinct" after a survey.
Oscar was taking part in a sponsored clear-up of a riverbank near Fulham's Craven Cottage stadium when he made the discovery. 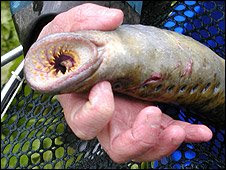 He said: "All of a sudden I saw this thing and thought, 'what's that?'
"I picked it up and it looked like an eel," he said.
"I did get a shock when I saw the mouth."
He added: "I really like animals - especially creepy ones like that."
Lampreys are extremely selective with their spawning sites (BBC)
What Oscar had found proved to be a 15.5in (40cm) long sea lamprey, one of the most ancient creatures on earth. Like the shark and the crocodile, sea lampreys have barely changed over thousands of millennia. The parasitic creature attaches its circular mouth to larger creatures before sucking out their insides.
Chris Coode is river programmes manager for Thames21, the charity that organised the clean-up.
He said: "We have only found one or two in the 15 years we have been cleaning up the Thames.
"The fact they are coming back is a really good sign.
"The Thames is now one of the cleanest city rivers in Europe."

He added: "Oscar's lamprey was dead, but it is not a bad thing - because they die immediately after spawning."

courtesy of the Thames Explorer Trust: the lampreys are back!
Lampreys are being found in other rivers of England, while the Environment Agency has identified 12 spawning sites and seven adult Sea Lampreys have been spotted.
The fish was once considered a delicacy - and King Henry I, who lived in the 11th Century, was reputed to have died from eating too many.
However, Oscar said: "It absolutely stank - a horrible fishy smell."!
This article is courtesy of the BBC News site - I was going to include some information on crocodiles and sharks .. but they got left on the cutting room floor .. other things and a brief bit of relaxation took over today ..
Thank you Mr Postman - I've been watching that incredible final at Wimbledon .. it's finished for another year .. now back to work! My mother has been sleeping all day .. but I know she'll be interested to hear about the lamprey ...
Hilary Melton-Butcher
Positive Letters
Posted by Hilary Melton-Butcher at 20:28

This creature reminds me of the one in Stephen King's novel & movie Dreamcatcher. You may recall a similar, oversized creature with bigger teeth came up through the toilet to grasp its victim who sat innocently doing his business.

Hilary,
What an interesting fish. It is good to know that they are still in the world. They must have a way to stayed alive all this time. It is a good thing to see.
Dan and Deanna "Marketing Unscrambled"

OMG, I don't like this fish at all. It scare me. I hope I will never run into it.
Scary for me, may be cool for a teenage boy.

Giovanna Garcia
Imperfect Action is better than No Action

A truly fascinating story about the sea lamprey! Although, I have to admit that it is one ugly creature.

It appears that England has made substantial progress in cleaning up the Thames river...which is great environmental news!

Hi Liara .. I can't say I do .. but the thought of an auroch coming into the bathroom doesn't thrill me! When I was a kid .. I didn't like the back cold bathroom .. I always thought a wolf would get in! Must have been reading Little Red Riding Hood.

The lamprey seems a good omen to a clean river!

Hi Dan and Deanna .. yes it is good to know that they've managed to find a pocket of fresh water to stay alive in .. and now can breed in our cleaner waters. I just liked the story!

Hi Pete .. thanks - yes it is good that the rivers are being cleaned up .. and yes it is one ugly creature ..

they must once have been prolific and easy to catch .. like oysters and eels I guess ..