Those Magnificent Men and their flying machines ...

Leonardo Da Vinci said “Once you have tasted flight, you will walk the earth with your eyes turned forever skyward, for there you have been, and there you will always long to return”: That is me! .....

Five hundred years ago Leonardo was still alive, four hundred years later the first flight was made across the English Channel by a Frenchman, Louis Bleriot. “Flying machines are no longer toys and dreams, they are established fact,” said David Lloyd George in 1909, before he became Prime Minister in 1916, after reading The Times’ breathless coverage of the historic flight. 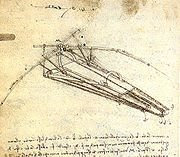 The Times, 26 July 1909, reported thus: “The long-dreamt-of-feat has been actually accomplished; pluck and promptitude have been rewarded; ..” The Wright brothers, the New York Times reported, had not believed the monoplane could do it and both praised the daring aviator.
A design for a flying machine, (c. 1488) Institut de France, Paris
Bleriot’s exploits were all the more remarkable considering he had badly burnt his leg on the engine exhaust leaving him on crutches, which were ditched once he was airborne, then on top of that he was a non-swimmer, and had none of our modern navigational aids.
He flew over the channel at a height of about 250 feet and after twenty five minutes, nearing the coast, lost sight of sea, ships and land, as a sea fog had rolled in, which is a bit daunting flying at 130 mph, with what we would call now-a-days “impediments” - do you not think?
Suddenly popping back out of the mist losing height, he realised he had had to turn westwards looking for the gap in the forbidding white cliffs of Dover, the monoplane was gathering speed as the desperate search for that elusive landing spot became somewhat intimidating.
As he approached those looming 250 foot white cliffs, his ‘heavier-than-air’ monoplane flying somewhat erratically down the coastline towards where he was scheduled to land, Bleriot commented that “it was the most anxious part of the flight: I had no fear for the machine, which was travelling beautifully”.

Dover Castle hove into sight and the gash in the cliffs appeared, Bleriot cut his motor at 60 feet almost crash landing, but thudded onto the hillside, breaking his undercarriage and propeller. Land and wireless telegraph sent the news around the world, Mr Bleriot was feted in London and Paris and his monoplane went on show in Selfridges. Bleriot was not a great pilot: he was known for pranging his planes, but he was above all tenacious, and very foolhardy.

The American Wright brothers are generally credited with inventing and building the world’s first successful aeroplane and making the first sustained and controlled heavier-than-air powered flight on 17 December 1903, mainly due to their invention of aircraft controls that made fixed-wing flight possible.

Many years later a young lady was having gliding lessons at Perranporth airfield, Cornwall when I was described as “being able to fly under verbal instruction. Tends to be a little over cautious with the controls” ... as I was learning to drive too – I suppose at 15 I was allowed to be a little careful? 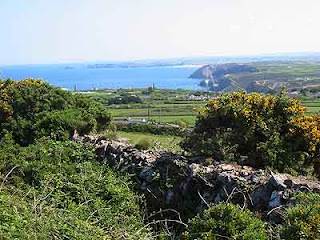 Looking from St Agnes Beacon, northwards towards Perranporth beach in the distance, with the Gliding Club in between; the name "Beacon" comes from the old Cornish "Bryanick", or "pointed hill".
It was a wonderful time those three years in the summer being able to glide for a week or two, on a private aerodrome – so I was able to drive the old buggies, tow the gliders, drive an E-type as a special treat, and eventually to drive myself over once I had passed my test aged 17. Going solo in a glider was a piece of cake – you could do that at 16!
Those long summer August days spent out in the open, high above Perranporth, with the freedom of being young without worries – just experiencing so much – the working with other course members all there for the thrill of the sky, learning new skills, being free of the family for the first time ...
The terrible weather .. no change then .. but this meant our flights were only 2 – 5 minutes maximum .. we were towed up by a truck, almost always over the cliff face, to a height of perhaps 700 feet if we were lucky, often only 400 to 600 feet; just enough time to cast off, a short ridge soar, then rush back on the wind before turning in to make a questionable landing .. somewhere on the runway.

Slingsby T.21 at Windrushers Gliding Club
The set up was primitive, there was a winch on a long runway for the fair weather days, but usually the launching took place towards the cliffs, where we could ridge soar following the birds above us; the truck braked towards the end of the runway, up above we experienced that sinking feeling, released the cable and let the tow wire drop to earth; the truck sped ahead in theory ensuring the that the cable dropped on the runway and not in the farmer’s fields either side, and did not tie itself in knots as it settled – de-tangling a wire tow rope is not fun. 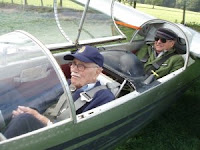 North Wales Gliding Club T31 cockpit – lovingly restored
My step-grandfather co-founded the Cornish club in 1957, when he was in Surrey with us he would fly over our house waggling his Tiger Moth wings at us kids – those were the days! He would take me up to the club, or we would go through as a family on our holidays in Cornwall, so as soon as I was able I was off and gliding: it was my time, my sport.
I first learnt in the training glider the Slingsby T21, eventually going solo in the T31 – they are open cockpit training gliders and are described thus: “The T.21 was popularly named "The Barge", after its boat-like hull and sedate flying qualities, while the T.31 was often referred to as "The Brick", again after its flying qualities.” 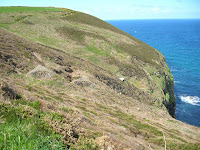 The headland called Newdowns Head just round from St. Agnes Head. Capped mine shafts in the foreground: Courtesy of Joe Pritchard
Sadly once those years were over life moved on, work came and time became precious .. perhaps in this new century I should experience the thrill of flying again – the memories are still there. Bleriot’s restored one hundred old plane is once again on show at Selfridges, also celebrating its one hundred years – Gordon Selfridge, from Chicago, had an eye for public relations, this appears to remain today!
Thank you for coming today Mr Postman .. it's always good to see you - it's a bit damp at the moment, but at least the weather was clear on Saturday for the flight recreation across the Channel. Mum and I will enjoy the memories of the gliding club, learning to drive one of the first minis, and then the mini cooper - which was much more fun .. caution had been thrown to the wind! Did you ever see the film "Those Magnificent Men in their Flying Machines"? and of course the iconic mini film "The Italian Job" ? .. a couple of the films I've seen more than twice!
Hilary Melton-Butcher
Positive Letters
Posted by Hilary Melton-Butcher at 12:21

Really great post! Over here in America a new movie is coming out soon all about Amelia Earhart and I'm so looking forward to seeing it. Flying is so interesting!

Hi Dani .. thanks for the comment. I'd forgotten about the Amelia Eckhart movie .. I must get to see it when it gets down here ..

Get flying! .. Go well and have a good week -
Hilary Melton-Butcher
Positive Letters

Interesting post on flying today! The information on Bleriot was quite fascinating. He apparently was a daredevil...but where would we be without people that take apparently insane risks.

I was impressed with his bravado....he did make his mark in history!

Hi Pete .. yes he was rash, very enthusiastic, but obviously very clever ..he invented the idea of automobile headlights and established a successful acetylene headlamp business, amassing a small fortune. He then lost that experimenting .. but kept on ..as entrepreneurs and engineers tend to do .. Wiki has quite a short good explanation .. for a little more info.

Certainly his bravado was required and his name is here to stay ..
Thanks for your comments
Hilary Melton-Butcher
Positive Letters

Hi Hilary
It is truly amazing to see how far we came along. Looking at the little plane, you know I don't think Craig would like to get on board to such a little plane. Than again, if that is what we have today, I am sure he wouldn't think twice.
Thank you for sharing.
Giovanna Garcia
Imperfect Action is better than No Action

Hi Gio .. it always staggers me how much we've established in the last 100 years ..the world is so different. If Craig was out exploring somewhere .. like we did in Namibia .. he'd been having a ball! Gliding is safe - you can come back to earth ..?!

Thanks for being here .. glad you enjoyed it ..
Hilary Melton-Butcher
Positive Letters