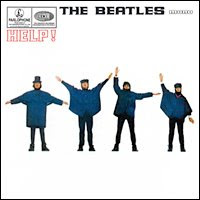 Dear Mr Postman .. thank you for delivering this letter .. the Help! was more accurate than I thought it would be ..

Help! – I guess we all remember Help! the Beatles album .. which, in 1965,was their iconic soundtrack album to the film of the same name. Those first few formative years (1960 – 1962) in Hamburg, when the Beatles moved from Liverpool to earn a living as musicians in the seedy Reeperbahn, Hamburg’s red light district! They had to work really long hours, living in pretty primitive conditions .. but it was here that they said they were born in Liverpool, but grew up in Hamburg: or another way of looking at it they went to Hamburg as kids and discovered they were from Liverpool.
Studio Album - Parlophone - by the Beatles issued in the UK 6th August 1965

Their music was highly innovative pop, and once they’d signed up with George Martin, the record producer ... we all know what happened next. Years of success .. their music being influenced by Bob Dylan, folk music, country and western, hard rock .. their sound matured into an eclecticism that opened the doors for all sorts of musical experimentation.

As we’re all aware – the western world is in a state of hiatus and we’re all looking at different approaches to life and ways to earn a living .. whether we’re individuals or businesses – everything is radically different. Hamburg is reinventing the Beatles .. through tours of the area, the naming of a square “Beatles Platz” shaped like a gramophone record featuring stainless steel statues of the Beatles , a new Beatles museum featuring a life sized model of the Yellow Submarine and a mock up of the Clubs where the Beatles played all those years ago. 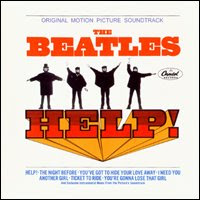 The American album - Capitol Records - issued 13th August 1965
As an aside: the Help! cover with the Beatles in a flag semaphore formation .. was meant to spell “HELP” as you’d expect .. but apparently it didn’t look good – so the formation was changed and it now spells “NUJV”! That does deserve the exclamation mark. Just to be difficult the formation on the American Capitol records release actually spells "NJUV"!

Hamburg has a connection with us .. a German girl came to work for my mother to improve her English .. and we’ve remained good friends ever since (the children (7 and 9) write regularly to my mother) – and so like to learn new things .. my mother & I have visited Hamburg a few times ..and it’s a great city.

Yesterday’s post on “Slippery Customers” has a link here .. the cuisine of Hamburg includes a dish from Lower Saxony called “Aalsuppe”, often mistaken to be German for “eel soup”, however the name probably comes from the Low Saxon “allins”, meaning “all”, “everything and the kitchen sink”, not necessarily eel: however today eel is often included to meet the expectations of unsuspecting diners! I don’t think we tried it!

Hamburg port and thus city were originally founded in 1189, and the port (a Free Port, established in 1888 enabled traders to ship and store goods without going through customs and further enhanced Hamburg's position in sea trade with neighbouring countries) is understandably described as Germany’s “Gateway to the World” – the River Elbe is navigable inland as far as Prague in the Czech Republic, while the 110 km (68 miles) narrow deep water river estuary stretches as far as the North Sea – this then was connected via the Kiel Canal to the Baltic Sea.. another gateway to Scandinavia and Eastern Europe. The opening of the Kiel Canal in 1895 was filmed and this early footage is preserved in the Science Museum, London; there had been a smaller canal – the EiderKanal – which had been operating since 1784. 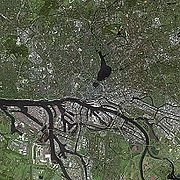 The Elbe River - Hamburg City to the north, with the tributaries and port development on its southern banks.
There are two fine ships providing the link to San Diego moored next to each other in the watery world of the old port district – surrounded by wharves, old warehouses, granary lofts interlinked to the Hanseatic mansion houses of the rich upper-class by the Hamburg canal system. The old port houses today’s modernised houses, together with the many yachts and sailboats moored in and around the docks, while the new port has been developed on the south bank of the Elbe utilising its many large tributaries and islands.

The old port is fascinating to explore and can be done walking around over the many bridges – 2,300 in total = yes! more than those of Amsterdam and Venice combined. .. or travelling via the canals in a narrow boat tour, where the draught is very small and going aground during a waning tide is a very possible.

Help! .. too long, so tomorrow we’ll explore the world of San Diego, ships, saints and tie everything up – once again across the globe ..

Thank you Mr Postman for delivering our story – my mother will be pleased to hear about Hamburg .. it is an interesting city with lots of fascinating history ... and it’ll bring back memories of our visits there.
Hilary Melton-Butcher
Positive Letters
Posted by Hilary Melton-Butcher at 14:55

Hilary, what a lot of great information. You always tie it together so well. What a lovely post. Have a good day.
Dan and Deanna "Marketing Unscrambled"

Hi Deanna and Dan - thanks so much for your comments and enjoying the tie in. Glad you enjoyed it .. I will have a good day - you too have a good night!
Hilary Melton-Butcher
Positive Letters

2300 bridges!! That must be an incredible sight to see!
Enjoyed learning more about the Beattles, too.

Hi Roxanne .. yes I know - the canal boat ride was fascinating through the granaries, lofts and wharves. It'll be interesting to see if they get more tourists through utilising the Beatles name and time in Hamburg - it is a lovely city.

Meeting foreigners expands one's perspective. As you discover, everyone has potential to learn a great deal from everyone else. It is a matter of choosing to be open-minded and receptive to incoming energy and information. People are often selective about what they take in.

Interesting information on when the Beatles were in Hamburg! The Beatles at that time generated a substantial foreign exchange for Britain.

Perhaps, you will do another post on the Beatles...they have spread their music across the globe.

Hi Liara .. thanks for the comment - I know you've travelled probably lots and met peoples from around the world .. it is being as you so rightly say being open-minded and receptive ..

Hi Pete .. thanks for your comment ..and for enjoying the Beatles in Hamburg .. sadly my musical knowledge or talent I don't think is up to scratch on this - also it would be a huge subject ..

Thanks for the thought ..
Hilary Melton-Butcher
Positive Letters

I was 11 years old when the Beatles were out and I remember buying bubble gum that came with Beatle trading cards!

I think anyone with a humble beginning can be inspired by the Beatles and their magical mystery ride!

Hi Tess .. well remembered .. I'm sure we had them here - but bubble gum was never a favourite .. and I am a little older.

Everyone who's successful has to work hard for their success .. and the conditions in Hamburg were pretty squalid .. but they got and did it - their drive and passion were their music.

Thanks for coming over and remembering those early days!
Hilary Melton-Butcher
Positive Letters