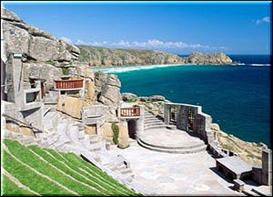 Theatrical backdrop, moonlit tales, sweet smell of wild flowers, the sound of the waves and the feel of the sea air all make for the most magical of settings in the far west of Cornwall – just five miles from the end of the land – the most extraordinary of theatres is found nestling amongst the cliffs.

Seating has been hewn from the craggy cliff face, the winding gorse and thrift lined path leads perilously down to the stage itself apparently protruding out into the bay beyond. The sun slowly sets, the moon in all its phases rises above the gentle swish of the sea or the crashing of the waves on a windy summer’s evening – the audience sit entranced, involved and listening to the words, or songs coming from the stage below.


The Minack Theatre high above the sea

Think of Shakespeare’s “The Tempest” being staged in such a setting, or hearing Gilbert and Sullivan’s “The Pirates of Penzance” echoing round the gully cliffs of the theatre back, or seeing the incredibly wide range of theatrical stagings ... opera, comedy, ballet, son et lumiere or chorus works gently and melodically travelling up to the gods – the seats high up above the stage. 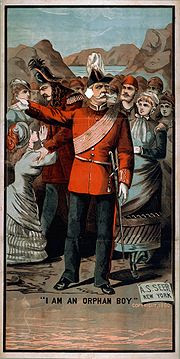 We used, in the ‘60s and ‘70s, to travel over the Peninsula from the St Ives area to Penzance .. not far – fifteen miles or so in total - then just follow all the lights of other cars winding along the Cornish lanes from Newlyn, through Mousehole, along and past Lamorna, keeping on through Treen until the village of St Levan was signposted southwards .. going down the steep sided valley towards the sea before turning off to the rough and wild area as directed.


1880's poster for The Pirates of Penzance

We were well loaded – waterproofs to sit on, rugs to wrap round or under us, coats, jackets, hats, scarves, thick socks and boots, in those days a few had folding chairs to sit on – plonked on patches of semi flat ground, the rest of us gathering round ... picnic baskets with simple fair, but definitely full of hot sustaining coffee or tea, for some a wee flask or two ...

All this was carried down those perilous cliff faces ... scrambling for footholds, placing baskets to steady ourselves .. find our perch – the elders guiding us to “their best spots” – greeting other friends and relatives – the Cornish community of diehards; there were few lights, we all carried torches or relied on the moonlight.

Out came the food .. soup from other flasks, rolls filled with ham, hard-boiled eggs, tomatoes, cucumber pieces and at last our wonderful Cornish pasties ... pastry rounds filled with finely chopped beef skirt and onions, small diced potato and swede-turnip, sprinkled with salt and pepper, a dab of butter – the pastry edges brushed with beaten egg, pulled up and pinched together on the top – a hole punched in the middle to let the steam out, placed on a baking tray and baked in a moderate oven for 50 minutes or so .. til golden brown, and steaming hot ... remove, leave to cool for five minutes – quickly wrap in tea-towels and wrap again in other cloths to keep warm .. 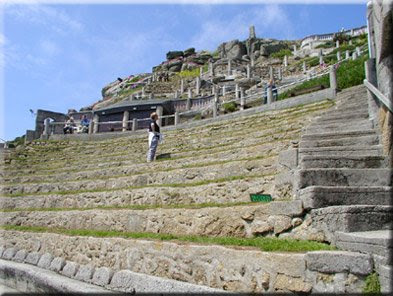 The aroma of fresh hot pasties, put into greaseproof bags or held in our hands if we felt brave enough against the piping hot pastry or weren’t worried about losing some of the oozing hot pasty filling ... delicious – summer is the time for these remembrances – happy days high above the rocky outcrops with the cool damp air and dusk descending before the impending performance to come.


The Minack Theatre with its 'hewn' grass covered bench seats

Strawberries – freshly picked from the fields that afternoon – with lashings of Cornish cream to finish a fine meal off .. and we were ready to heed the words of the bard, or hum along with the choruses at the magical world of the spectacle below. Perhaps a chocolate or two to sustain us during the interval as we reviewed the show so far .. and just relaxed into the rocky arena enjoying the ambience of that wonderful setting. 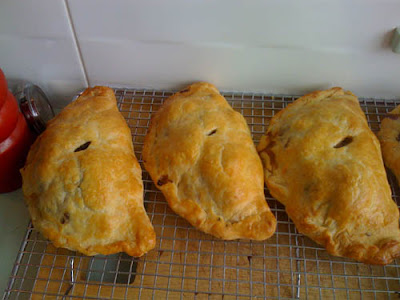 What days of youth – young unformed boys and girls, an undeveloped but much loved place of theatre ... how they’ve all grown and changed – the Minack .. in Cornish meaning that rocky place .. still in its fantastic setting, modernised .. with grass covered terraces for seating, a more permanent flattened stage area, the audience and visitor facilities more modern .. but what an amazing testament to one woman – yes! one woman .. and her determination to make it work – once she’d set her mind she tracked the stars and moon overcoming all obstacles to bring the Minack Theatre to life – forever. 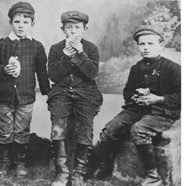 Homemade Cornish pasties – once tasted never to be forgotten .. the ubiquitous shop ones quickly rejected in favour of family fare, though even I might concede that they’d be better than those of days gone by .. Roman olive oil pastry would presumably be extremely solid and rock like?

The rock of ages – the Minack .. versus an extremely palatable and delicious pastry pasty – gosh are you hungry now? – I am!

Dear Mr Postman – we are in those summer days again .. of picnics, lovely weather – perhaps damp grass, but picnics at every moment .. sitting on hills and watching the sun go down, quaffing a glass, or nestling in a hollow out of the wind just savouring the fresh air .. with a pasty in hand – what could be better? Thank you for delivering this .. my mother will laugh and have memories of her own ...

I think we need to revive the theater! I'll be right over to join in the fun and memory making. What a wonderful story.

We are eating less in restaurants and packing our cooler more often on weekend trips to unknown destinations. I'm hungry...

Hi Tess .. great .. looking forward to seeing you - please bring the sun as a present when you come!

Over here too I think everyone is saving their pennies - home cooked food is delicious .. and eaten in the fresh air must cheer us up.

Hilary, hungry for sure. That sounds so good. Such fun. We have something similar here, but we are in a desert so no see. Our outdoor theater is called Tuacahn. Red rock mountain as the back drop of the stage. Sound echos off the rocks. Wish they had better photos of the area but this is the website:
http://www.tuacahn.org/index.html . Southern Utah is warm during the day, but cools off nice at night.
Dan and Deanna "Marketing Unscrambled"

You are amazing with all of your story. What makes your story so great are the details you put into it. Fantastic!

Thank you for sharing.
Giovanna Garcia
Imperfect Action is better than No Action

I couldn't resist commenting when I saw you were writing about and showing photos of pasties. Being raised in Michigan, pasties were a main stay for us. To this day, I still make them. Each time I take a bite, I am transported back to my childhood days.

Thank you for letting me relive a wonderful memory.

Hi Deanna and Dan ..thanks for the information re the Tuacahn - it looks a little more sophisticated (to put it mildly) than the Minack. However the setting must be wonderful .. and in your neck of the woods - it'll be warm to start with .. not necessarily at the Minack.

Thanks for your input - it was fun and will be fun again .. I must go out when I get back down to Cornwall with some free time.

Hi Gio ..glad you enjoyed the story and the ambience of the theatrical setting .. it is brilliant .. and the pasties are delicious!

Thanks for your comments, always appreciated -
Hilary Melton-Butcher
Positive Letters

Hi Barbara .. for some reason your comment has only just popped up - maybe I missed it!

Delighted I can bring back some childhood memories .. Michigan is cold .. and I guess you perhaps sat on the shores of the lake and ate yours? - well wrapped like we were ...

I was surprised at the history .. but that's the miners looking for work across the world .. so at some stage another post will be forthcoming of bygone years ..

Happy memories .. I'll be making some this week - as it's rekindled my 'need' for a pasty!

Thanks for visiting - all the best
Hilary Melton-Butcher
Positive Letters

That is a breath-taking place for a theatrical performance. Visiting Delphi is also a memorable site. Discovering less known treasured places uplifts the spirit and nurtures the soul.

Hi Liara .. it is an amazing place; yes I'm sure Delphi would pretty incredible .. I've been to Rhodes and the Lindos Acropolis, as well as the Athens one - it's just lovely when one can just 'blend' into the backdrop of fantastic places and be at peace and enjoy the moment in such a setting.