Herbs, Worts and all!

It is impossible to write of herbs without writing of the men and women who discovered the plants and dared to taste them for the first time. Among them were the food assayers, the simplers, the tasters, the indigenous healers who had learnt by observing, testing and tasting the seeds, leaves, tubers and fruits of the land and hedgerows.

Sick animals would change their food preferences to nibble at bitter herbs they would normally reject, birds would be observed eating seeds, animals carefully foraging – would open new doors to the “wise women”, who prescribed herbal remedies often with spells and enchantments, before becoming targets of the witch hysteria.

The study of herbs goes back as far as 5,000 BC, with the ancient Greek and Roman medicinal practices being preserved in the writings of Hippocrates and Galen. Galen’s “Die Materia Medica” being the first authoritative reference compendium published in the 1st century AD, remained together with Hippocrates’ “Historia Plantarum”, written in the fourth century BC, the two definitive works that herbalists and botanists relied on into the 17th century.

Galen, had on becoming independently wealthy, in 129AD, from a father whom he described as a “highly amiable, just, good and benevolent man” – but who was known to have eclectic interests including, philosophy, mathematics, logic, astronomy, agriculture and literature -and who had brought his son up to study and learn all things, followed the advice he found in Hippocrates’ teaching.

The Arms of the Worshipful Society of Apothecaries, whose motto is Opiferque Per Orbem Dicor, a Latin reference, meaning I Am Called a Bringer of Help Throughout the World, to the Greek deity Apollo.
He travelled widely in the Mediterranean and western Asia exposing himself to various schools of thought in medicine. He became physician to the gladiators of the High Priest of Asia, developing his skills as to the importance of diet, fitness, hygiene and preventative measures, as well as living anatomy – referring to wounds as “windows into the body”.

These he recorded in his Die Materia Medica, but which would have been unavailable to most mortal men for many centuries. The early discoverers would have continued searching, watching, trying and tasting and must have suffered many a catastrophe in gaining the knowledge that provided healing plants, plants for the pot, wild herbs for the gardeners, new resources for spinning and weaving, extraction of dyes, and colours and fixatives for the artists palettes etc as times moved on.

With the settlement of villages beside the monasteries, noble houses and the courts of the Crowns, provisions for the peoples were essential, and this brought about the planting of gardens of all sorts: physic gardens, herb gardens, orchards, fruit and vegetable plots and the spread of crop planting in fields. Writing and recording started to become more common place and travellers, apothecaries, merchants all would have started to spread this 'new' learning. 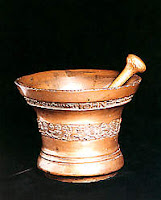 This pestle and mortar (dated 1662) belonged to the Apothecary John Battersby of Fenchurch Street. He became Master of the Society (1674/5) and was a friend of Samuel Pepys
Witchcraft and magic, darkness and superstition, still had to be overcome, as well as the terror of the plague, ravaging crop diseases (leading to the necessity at times of practicing of cannabilism!), human spite and human fear over the centuries leading to wars over land, spices and today even plants in the oceans.

It was not until three remarkable men, John Gerard, John Parkinson and Nicholas Culpeper started to grow distrustful of magic, and began to learn by experience – back to the testers and triallers of yore – known in those days as “simplers”. 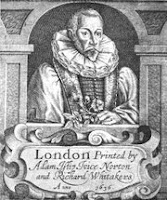 A simple had become a medicinal herb (from the simplers who had scoured the land for plant, seed and herb restoratives) – the plant’s active properties required to be separated – four basic procedures were established, with the resulting preparations being known as decoctions, infusions, dilutions and extracts.
John Gerard 1545 – 1612
Gerard having travelled widely to eastern europe became the director of Lord Burleigh’s gardens in London and, in 1597, wrote his “The Herball or Generall Historie of Plantes” – however medieval botanical texts are fascinating for their plethora of information and illustrations – but beware the veracity between fact and legend!

Parkinson followed in the late 1500s, having been an apprentice to an apothecary, he worked his way up to be one of the founders of the Worshipful Society of Apothecaries, and was later botanist to King Charles I. He wrote two monumental works - one generally describing the proper cultivation of plants and the other an exceptional treatise of English plants.

Illustrations of parts of an oak tree from page 1386 of Theatrum Botanicum (1640) - by John Parkinson.

Culpeper is the last of these three herbalists and early botanists, spending most of life outdoors cataloguing hundreds of medicinal plants, before publishing two books in the early 1650s: “The English Physitian” and the “Complete Herbal”, both containing a rich store of pharmaceutical and herbal knowledge.

Many of these herbs and plants we continue to use today, and which are now being looked at with new eyes using technological advances to ascertain their medicinal and health properties; while the internet increases accessibility for peoples to look through the records, papers, drawings and other documentation to find ‘new’ cures.
The title page of The English Physitian – by Culpeper
A word with the suffix “–wort” is often very old, as the old English word “wyrt” derived from its German origins for ‘root’, and was often used in the names of herbs and plants that had medicinal uses. The old-fashioned word ‘wort’ has a comfortable if antique sound, but for many people today the word ‘herb’ implies cleanliness and instils confidence!

On this wonderful sunny day in June - thank you for delivering our letter - my mother has a huge knowledge of plants, and even to this day will remember names of flowers .. yesterday it was 'scabeous' - a beautiful skyblue and white flower; earlier in the year it was 'subhirtella' - the latin for prunus! Well - that's my Mum! I didn't know those .. in fact my knowledge is growing, as you'd expect as I try to bring different bunches of fresh flowers for her room. So today - she will be pleased to have this background. Equally she reminds me to keep looking for names we both don't know! I laugh to say I've forgotten and she laughs and says you're too young to forget?!
Hilary Melton-Butcher
Positive Letters Inspirational Stories
Posted by Hilary Melton-Butcher at 12:41

Enjoyed your post on Galen! He was an exceptional man...the beginning of medicine as we know it!

Hi Pete - glad you appreciated Galen .. yes he probably was .. thank goodness for them! They are amazing our ancestors and how they were constantly looking for new things, new ideas .. wonderful!

I just bought some herbs to start a herb garden, and after reading this, am proud to be part of such an honoured tradition! I just hope my little plants live long enough to make it to my dinner plate... :)

In China, til this day many people still use herbs for medicine (My parents still do.). It is interesting to me to read about you guys the westerner on herbs.
Thanks for sharing.
Giovanna Garcia
Imperfect Action is better than No Action

Hi Daphne .. fantastic news .. I'm sure your herbs will flourish - and it'll give you so much pleasure. I'd love to know which ones you've planted .. and to see how you're doing .. there are some lovely flavours for all sorts of foods .. even lavender shortbread! I had that in South Africa ..

Hi Gio .. yes the Chinese are the experts. We do too .. I use a herbal cream for my Ma .. we've used this for years now ..but have always tried to heal ourselves. Certain the Bach Flowers Rescue Cream works wonders for us.

Certainly we learnt from the itinerant travellers in the past - as they traded their herbs and potions.

Over the years as cultures were able to obtain more information from different areas we started to learn more from the East - China particularly .. now we're learning from South America and Africa as well.

Thanks for visiting .. it'd be interesting to learn more from you sometime ..
All the best
Hilary Melton-Butcher
Positive Letters

It is remarkable how human beings reconnect with their sixth sense and intuition in order to know which herbs and natural plants are no poisonous and which ones are especially useful for particualr conditions. Angels and other beings are providing timeless guidance every moment. WOnder if you are familiar with the Brother Cadfael mysteries?

Hi Liara .. absolutely .. all peoples all over the world. I loved your latest story about the man under the stone .. almost like a fairy story -
http://blog.dreambuilders.com.au/journal/2009/6/29/heed-the-wise-counsellor.html

Yes - I have read some of the Brother Cadfael - very quickly on trips back from SA .. I must have another look at his stories ..

Thanks for visiting .. enjoy your trip -
Hilary Melton-Butcher
Positive Letters

Hilary,
That was amazing. Most of that was unknown to us. Love Brother Cadfael. There is so much about herbs that I do not know it is always worth studying more about. Thank goodness for these people that took an interest in these things so that we can have so much knowledge today. Without their efforts we would be so much more lacking in knowledge than we have today.What a great blessing they have been to all of us. How we eat, medical knowledge, how to grow these plants? How to know what they look like by the drawings that they left? Who says one person can not make a difference to the world. Thank you Hilary. So good. Enjoyed learning more about herbs and these people. Give your mother a big HUG from her fans.

Hi Dan and Deanna - many thanks for that - just so glad you enjoyed it so much. Glad you've read Brother Cadfael ..I'd better go to the library and get a copy!

Yes - thank goodness for our questionning ancestors, and for their intellectual abilities to record these findings.

Many thanks for your thoughts - always appreciated by my elders! Poor Mum doesn't like this very hot weather much .. despite two fans in the room .. it's still too hot for her .. looks like a change is coming tonight - not good for us - but better for her!