What a mix - stone weights, silver chisels, American millionaires, an ancient village, and yet another major invention in the last 130 years, trophies and sheep for starters. 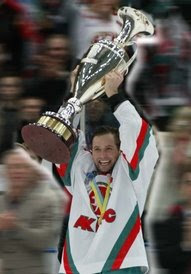 The Silver Stone Trophy was originally designed and produced for the now defunct European (Ice) Hockey League (1997-2000) by Italian artist Enzo Bosi. It weighs seven kilograms in silver chisel, equivalent to one British stone (fourteen pounds), hence the name The Silver Stone. As of 2009, it is awarded to the winner of the Champions Hockey League.
The Silver Stone Trophy
The silver chiseller is a craftsman (specialising in jewellery and art and design) who embosses the metal giving it both volume and relief. The Artistic Industrial Museum in Naples, opened in 1882, distinguishes itself from other metropolitan museums, because it was founded with craft training workshops attached to the museum, where silver chiselling is taught. 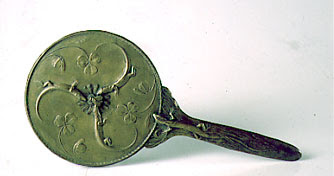 An embossed mirror on display at the Artistic Industrial Museum
The village of Silverstone nestles in the former Whittlewood Forest, a medieval hunting forest in the south of the county of Northamptonshire, which is noted for its bluebells in mid-Spring.
The village is listed in the Domesday Book and in the Middle Ages its trade was primarily in timber through the practice of coppicing from the surrounding forest, while fish ponds to the north fed the villagers.

Grand Prix motor racing has its roots in organised automobile racing that began in France as far back as 1894. However Karl Benz, from Germany, generally is acknowledged as the inventor of the modern automobile. Motor racing quickly evolved from a simple road race from one town to the next, to endurance tests for car and driver.
Karl Benz's "Velo" model (1894) - entered into an early automobile race
Innovation and the drive of competition soon saw speeds exceeding 100 miles per hour (160 km/h), but because the races were held on open roads there were frequent accidents with the resulting fatalities of both drivers and spectators.
As a direct result of the enthusiasm with which the French public embraced the motor car, manufacturers were enthusiastic due to the possibility of using motor racing as a shop window for their cars. 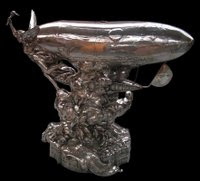 The Gordon Bennett Cup
In 1900, James Gordon Bennett, Jr. the owner of the New York Herald newspaper and the International Herald Tribune, established the Gordon Bennett Cup. He hoped that the creation of an international event would drive automobile manufacturers to improve their cars. Each country was allowed to enter up to three cars, which had to be fully built in the country that they represented and entered by that country's automotive governing body. 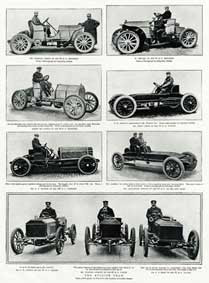 Bennett was primarily educated in France, and after some altercations in 1877 in New York he settled in Paris, launching the Paris edition of the New York Herald, titled The Paris Herald, the forerunner of the International Herald Tribune.
Grand Prix motor racing was first established in Britain by Henry Segrave, an American with an Irish father, at the Brooklands course in 1927, after he won the 1923 French Grand Prix driving a Delage 155B. Brooklands had been opened in 1907 as the first custom-built banked motor race circuit in the world, with Indianapolis opening a year later.
Delage DI 6-Seater Tourer 1925

Silverstone was first used for motorsport by an ad hoc group of friends who set up an impromptu race in September 1947. During the course of the race one of the racers, Maurice Geoghegan, was unfortunate enough to run over an errant sheep that had wandered onto the airfield. Both car and sheep were written off, and in the aftermath of this event the informal race became known as the Mutton Grand Prix!

Silverstone has hosted the race regularly since the start of the Formula One championship in 1950 (in which it was the first race of the first ever official World Championship) and every year since 1987; it alternated with Brands Hatch between 1964 and1986, and with Aintree (better known as a racecourse).

The 2009 Formula One Grand Prix season is well under way with most of the events taking place in Europe, Asia and Australia, with only one race in the Americas – in Brazil, the Canadian Grand Prix having been dropped this year.

However you may have noticed that Formula One, one of the grandest and most popular sports in the world, has been involved in a car crash of its own making. The governing body has collided in monumental fashion with eight of the leading teams. 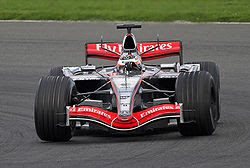 Let’s hope for motor racing fans and the sport itself that the intense, vigorous, unpredictable sporting dynamic that is motor racing will prevail, as a delicate balance is struck between the two organisations.
Dear Mr Postman .. thank you for letting us have this letter - my mother loves watching Formula One, so she will be interested to hear about this ..
Hilary Melton-Butcher
Positive Letters
Posted by Hilary Melton-Butcher at 20:53

Hi Liara .. thank you about motor racing in Australia - I wanted to put something in about Jack Brabham, but then the post would be way too long!

I'm aware that I'm missing out interesting ideas/comments from other countries- I've been thinking about bringing them in later on - & I've wanted to put lots of really salient points in .. but again length limits me -

My aim is to have succinct, interesting, stimulating posts ..

Thank you - I appreciate your comments
Hilary Melton-Butcher
Positive Letters

Hilary, thank you for the great amount of history and knowledge that you have given to us on the subject of car racing. So many people have the need for speed. This is one way that they can do that. Have a great day.
Dan and Deanna "Marketing Unscrambled"

Hi Deanna and Dan .. - I know some people love their motor racing .. I'm going to see if my Ma is awake enough to watch it with me later on, as she used to love it .. it's personally not my favourite - but I learn as I go!

I hope Pete - will enjoy the car stories!

Thanks for visiting .. & you too have a good Sunday -
Hilary Melton-Butcher
Positive Letters

Interesting history on Grand Prix motor racing! I was unaware that it started in England!

It appears that the people like to race anything possible...they race horses...with the invention of the automobile they race cars!

Hi Pete ..thanks for that .. I think it probably started in France, but as with all things in the early 1900s it seems to have spread pretty quickly to the UK & the States, let alone Germany, Spain, Italy ..

Yes - we can race anything .. even snails I saw the other day!

Grand Prix Motor Racing sound very exciting, and the history behind it are very interesting.
Thanks for the story.
Giovanna Garcia
Imperfect Action is better than No Action

Hi Gio .. yes - some people love it .. but the history is very interesting .. as for all technological and entrepreneurial developments.