Who spent his early years collecting music, recording music hall artists and operatic stars of the day, while also travelling continents to record indigenous music? Who was a young amateur musician and technophile, who could play by ear practically any instrument and badgered Columbia for a holiday job in the late 1880s? 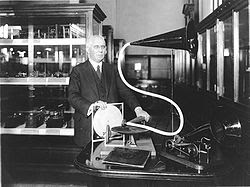 Not Emile Berliner (right), who in 1888 cut the first new fangled flat gramophone record and a player to play it on, nor Thomas Edison who produced the cylinder playing phonograph – but Fred Gaisberg.

Gaisberg’s story really fascinated me and I thought it a tale worth telling – this is a synopsis of the man, who was meticulous in everything that he did, who had a huge curiosity and a voracious appetite for recording, while maintaining complete integrity in his dealings with the artists – ie he had an absence of self-consciousness, conceit or pompousness.. he let the performers record their song their way.

Columbia was the distribution and selling arm for Edison’s cylinder phonographs (see below), which he had intended to be used as a tool to aid stenographers in the Courts. In the meantime, the flat disk and player developed by Emile Berliner was aimed at the novelty market as a slot machine. 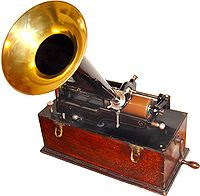 So Gaisberg, now working for Berliner, was sent over to London and arrived in the RMS Umbria sailing into Liverpool from New York in July 1898. This proved a momentous decision and transformed the gramophone from a novelty into the medium of maestros and divas, to say nothing of popular entertainers.

It was at this stage that Gaisberg realised that each country would have its own expectations for its music and for now, the cross cultures would not easily be accepted. So he set about recording the music hall artists of the day, but he had more difficulty with the opera stars as they were worried about their future if their songs were recorded – would they be required to sing in person ever again?

Gaisberg also realised that if records of local artists were being produced, each country would also need gramophones to play them on. In the years before the first world war Gaisberg, that enterprising recording engineer, realised the global potential of the infant gramophone.

So he set out travelling and from November 1902 to the summer of 1903 he recorded hundreds of records in Tokyo, Calcutta, Shanghai, Hong Kong, Singapore, Bangkok and Rangoon – as he travelled he made meticulous notes, so all the detail was recorded for posterity, together with the treasury of eastern folk and classical styles, untouched at that time by western influences. 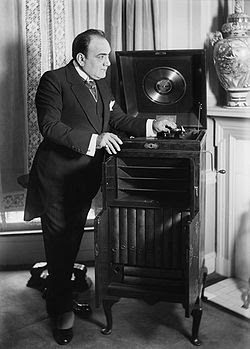 Before he left for the Far East in 1902, Gaisberg had been in Milan at La Scala and had heard Caruso (right), the young tenor, sing. Caruso was very impressed with what he saw; Gaisberg, ever the impresario, asked what fee Caruso would accept for ten songs; Caruso said £100 to be recorded in an afternoon – prohibitive at the time!

These travels round Europe and Asia were very daunting, not least with the methods of travel, but with the amount of items and elements that were required .. acid baths, acid, huge quantities of wax, sensitive acoustical recording equipment – all needed to set up studios in all sorts of places.

When Gaisberg was in the Vatican recording the Vatican choir in 1902, and what would become the only recording of the last castrato, the acid vats, in which the matrices were dipped, caught fire! They managed to put the flames out – but decided they could not stay and face the wrath of the powers that be in the Vatican!

Gaisberg, aware of the cultural challenges, recorded at the courts of both the Chinese and Japanese Emperors; made records of an India singer; recorded Islamic singers and despite not being enamoured himself to a number of these styles recognised the importance these recordings would have in the future.

He also recorded Dame Nellie Melba, Luisa Tetrazzini and Adelina Patti.The recordings made by Patti were very important as her bel canto style goes back to the mid 1800s and to the composers Bellini and Donizetti.

Dame Nellie Melba making a recording - note the positioning of the piano ..

His impresario skills in his later years did not desert him – he even matched Edward Elgar and the teenage Yehudi Menuhin to record Elgar’s B Minor Violin Concerto at the new Abbey Road studios. Gaisberg really was the first Artist and Repertoire man – putting the artist first, bringing in the repertoire and finally the recording sessions – he really did shape events.

All Gaisberg’s recordings, diaries, photographs, instruction sheets and supplementary documentation are fortunately stored, together with other artefacts, in EMI’s Hayes archives, just to the west of London, in temperature controlled vaults in an enormous hanger the size of two football fields.

If Gaisberg had not recognised Caruso as a new phenomenon and had not offered Caruso the chance to record – would the gramophone be as important today as it is? and would Caruso being as recognised as the great tenor that he is today?

The timing of these two coming together were as important then, as the Coronation of Elizabeth II in 1953 was in spurring the purchases of a television set to be able to watch that spectacular event.

These notes were taken from a recent BBC Radio 4 programme when Paul Gambaccini took us through EMI’s Hayes archive, which contains some of the world’s first recorded music, to uncover the story of Fred Gaisberg.

Thank you Mr Postman for bringing us this interesting information .. I've mentioned the story to my mother, so she will be interested to hear more and will no doubt laugh at the Vatican nearly going up in smoke!
Hilary Melton-Butcher
Positive Letters
Posted by Hilary Melton-Butcher at 15:26

I love when you make connections to things that I would never think of! Brilliant!

Hi Dani .. I can't quite believe how quickly you get here .. and thank you for the generous comment! Just glad you enjoy the stories ..that makes my day!!

Have a good weekend .. and see you soon ..
Hilary Melton-Butcher
Positive Letters

Interesting historical facts on Gaisberg! His contributions to early recorded music are priceless!

Hi Pete .. thanks .. I was really interested when I heard his story .. just to think this was only 120 years ago max! Amazed me ..

Thanks - good to see you here
Hilary Melton-Butcher
Positive Letters

Hilary, look at what one persons passion has done for the music industry. What great treasures that we have because of that person. And we thing we are not good enough. Maybe he did also, but look at what he gave us. Thank you for the best stories.
Dan and Deanna "Marketing Unscrambled"

Hi Deanna and Dan ..thanks - yes, see what happens when we have passion: we just need the enthusiasm and drive, & take the opportunities when the arise .. follow our dream.

Thank you for 'the best stories' - so pleased you enjoyed this story ..

Very interesting story. I guess, I would say you did the untold story of the phonograph.
I love inspiring story like this.
Thanks for sharing.
Giovanna Garcia
Imperfect Action is better than No Action

Hi Gio .. I think so too .. it was interesting and I knew I had to let others hear something about an amazing man, Gaisberg.

Thanks for being inspired ..
Hilary Melton-Butcher
Positive Letters

The history you share encourages people to expand their horizons.

Hi Liara .. thank you - I'm grateful you feel my stories are opening peoples' eyes to other aspects of life - albeit very brief.