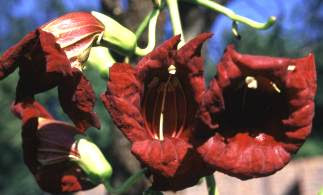 If you can have pastry rocks, I guess you can have sausage trees? These magnificent flowering and fruited plants are part of a large botanical family now in the Old World as well as the New World, which includes lianas. The sausage tree occurs throughout tropical Africa and the Indian subcontinent.

Its botanical name of Kigelia comes from a Mozambican bantu name, while the common name Sausage Tree refers to the long sausage-like fruit, which in Afrikaans is “Worsboom” meaning, believe it or not, sausage tree! Apparently in Arabic the name means “the father of kit bags” .. and would be the name used in northern Africa.

I saw them quite often in Southern Africa – though they were planted well away from where they might cause harm .. as one fruiting drop could cause serious damage to cars, or people! The tree can grow to heights of 70 foot (20m).

They also grow all over Botswana, especially in the Okavango Delta – that wonderful inland delta, which I have been privileged to visit quite a few times, where the wildlife live in relative freedom. Perhaps I even stood under this tree in Botswana waiting for a flight further into the Delta and another camp.

The animals make use of the trees in various ways – the trunks are used as rubbing posts by the Elephant, they graze the foliage Kudu; the fruits are pecked at for their seeds by a whole range of birds, including Parrots, while the fruit is eaten by several species of mammals, including Baboons, Warthogs, Elephants, Giraffes, Hippopotami, Monkeys and Porcupines – the seeds being dispersed in their dung.

In southern Africa they are widely used as shade trees and as they are one of the first species to flower in the southern hemisphere’s spring (August to October) they are a huge early resource for insects and birds. The tree is widely grown as an ornamental in tropical regions for its decorative flowers and unusual fruits, being found for example in Australia where the cockatoos love them, and California.

In African herbal medicine the fruit is believed to be a cure for a wide range of ailments, from rheumatism, snakebites, evil spirits, syphilis and even tornadoes! However studies are continuing to see what medical attributes may occur from the fruits of the tree – it has been shown to kill melanoma cancer cells, and is being used in various skin care treatments, for instance sores and ulcers.

While the fruit has known antibacterial properties, today beauty products and skin ointments are prepared from the fruit extract. However the fresh fruit is poisonous and strongly purgative, but after drying, roasting or fermenting it can be consumed – the Africans make a beverage similar to beer from it.

The rough wood is used for shelving, and boxes, while in Botswana and Zimbabwe the wood is used for the traditional style of canoe, called a makoro. In the Delta the makoros are propelled through the shallow waters with the use of a pole, in a similar manner as punting.
Makoros are traditionally made by digging out the trunk of a large straight tree, such as an ebony tree or the sausage tree! It is a wonderful way of being transported around the swamp to be able to see the wildlife in its natural habitat – just as long as you make sure you stay well away from hippos .. who can easily attack the vulnerable boats if they feel threatened. Just the silent swish of water, and the drips off the poles as they are raised and pushed down to propel the punt along – with the cries of the birds, the roars and gentle barking of various animals as they roam their landscape. 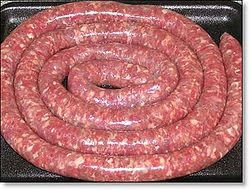 The fresh game meats were finely chopped, mixed with spices, preserved with salt and vinegar, and packed in sausage casings – and wound into a spiral before being cooked over an open fire. As there would always be more than could be used immediately and, as two hundred years ago, food could not be kept fresh, a cured sausage was made and was called dröe wors (dried sausage), in a similar process to biltong – often known as jerky.

Now-a-days the traditional boerewors is made with minced beef, but as with other sausages around the world, other combinations are made; however the spiral is the ‘trade mark’ sales pack.

So if you visit Africa stay away from fruiting sausage trees – but enjoy your boerewors as you are punted silently in your carved out sausage tree through the delta channels!
Thank you Mr Postman .. it's such a wonderful day here - and this would be just glorious. I am sure my mother will love this story - as she so enjoyed her holidays in Africa .. happy memories with lots of laughter ..
Hilary Melton-Butcher
Positive Letters
Posted by Hilary Melton-Butcher at 13:31

What a fascinating post on the sausage tree! Since I have never been there, your post gave me an interesting African experience.

Thanks for the great information!

Hilary, what an interesting plant. They could do some damage if it fell on someone. What a great job you have done on this post. Thank you for sharing.
Dan and Deanna "Marketing Unscrambled"

Hi Pete .. glad you liked the sausage tree - and I'm pleased you feel I gave you a 'sense' of Africa ..

It's a fun name for a tree - but so true to its fruiting looks!

Hi Deanna and Dan - yes it is an amazing tree - and one of those plummeting to the ground and hitting you on the way could be very dangerous!

Hi Gio .. it's really nice to know that you enjoy coming here for the 'new' things you can find out about. I'm grateful that you're enjoying it ..

The sausage tree grows in the UCLA complex!! So it's with you in California .. if you get there - perhaps you can have a scout around next time!?

Hilary, do you know what is going on with Giovanna's blog, all we get is an error page.
Dan and Deanna "Marketing Unscrambled"

Hi Dan and Deanna .. just emailed you .. not sure, but thought they'd have realised. I think it's only the blog part, and perhaps it's like they had a outage a while ago .. for some techie reason ..

Thanks and have a good day .. Hilary

Hilary, thank you for the answer.
Dan and Deanna "Marketing Unscrambled"

Hi Deanna and Dan .. thanks for replying .. it's still not up .. I guess something's gone wrong with the linkage between the blog page and the website .. I'm sure they'll sort it!