Green beer, Irish Wolfhound – do they mix? Yes, they troop the colour! This year has a special twist to the Trooping the Colour an old ceremony performed by regiments of the Commonwealth and the British Army. It has been a tradition of the British infantry regiments since the 17th century, although the roots go back much earlier.

A young Irish Guardsman in the Great War 1914 – 1918, left a note to his family that should he not return - could the family buy his comrades a drink? – a rather nice touch to this life of ours realised nearly 100 years later.

This has turned into a bequest and this year everyone, including Her Majesty, will be presented with a bottle of Irish Guards’ beer, with its green label displaying the Battalion’s Queen’s Colours and the Regimental Colours.

The 1st Battalion Irish Guards’ mascot is an Irish Wolfhound, named “Conmeal” and he was present, with his handler, dressed in his matching ceremonial cover. Irish Wolfhounds have been part of Irish history and life, perhaps even arriving with the early settlers. They were bred as war dogs and to protect the family and their stock, becoming hunters too. It has been claimed that during times of conflict, wolfhounds were bred to take men off horseback.

In military organisations, the practice of trooping the colours, standards or guidons, to act as a rallying point for troops and to mark the location of commander, is thought to have originated in Ancient Egypt some 5,000 years ago. It was formalised in the armies of medieval Europe, with standards being emblazoned with the commander’s coat of arms. 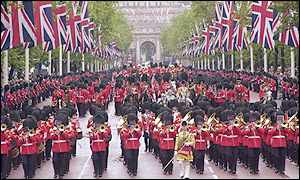 As armies became trained and adopted set formations, each regiment’s ability to keep its formation was potentially critical to its, and therefore its army’s success. In the chaos of battle, not least due to the amount of dust and smoke on a battle field, soldiers needed to be able to determine where their regiment was.

As time passed Regiments were awarded battle honours, which they emblazoned on their Colours, Standards and Guidons. They therefore became a link to the Regiment’s past and a memorial to the fallen: they became the heart of the regiment, in which all of its history was woven.

The Regimental Colour (or Standard or Guidon) is always paraded whenever the regiment is on a formal parade. However, the Queen's Colour is only paraded on certain occasions.

The Royal Colours are also held by the Royal Air Force, the Royal Navy and other Royal regiments and military units. Similarly countries around the world present Colours, standards and guidon to the units of their armies, navy and air force.

These celebratory re-enactments ended with the traditional fly-past over the palace. The aerial parade of 29 aircraft featured vintage machines and modern fighters. The Queen and her family watched the events from the balcony of Buckingham Palace. The display was led by a Lancaster in formation with a Spitfire and a Hurricane. Other aircraft taking part included four Tornado GR4s, six Eurofighter Typhoons and the Red Arrows, which flew down the Mall trailing red, white and blue smoke. 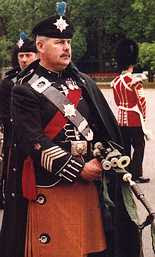 Yesterday reminded us of our history, our lives are steeped in pageantry and pomp, which everyone watching or visiting admits that no-one does it quite the English. This year the additional elements of the green beer, Irish Wolfhound and saffron kilts have made the celebrations a little different.

The BBC always cover these events brilliantly and this video coverage is no exception .. the first 30 seconds shows both the green beer and the Irish Wolfhound, Conmeal, while the rest of the presentation is extremely good – and so if you like pomp and circumstance, ceremonial uniforms, ancient history, marching bands, drum majors - it’s here in all its glory: enjoy!

Thank you Mr Postman .. my mother will enjoy remembering the show we watched yesterday .. and seeing the Queen and Royal family, as well as the green beer and Irish Wolfhound, while she commented on the saffron kilts!
Hilary Melton-Butcher
Positive Letters
I understand the video link doesn't work for some reason - I hope in due course I can get a video of this year's event .. it is out there!!
Posted by Hilary Melton-Butcher at 17:27

At the first thought, I perceived this post to be about the military...but after thinking about it appears to be more about pageantry and pomp. The English have that title all wrapped up!

I tried to view the video but it was only available to those in the U.K.

How wonderful to see the celebration that you have in the U.K. It is a great thing, it helps you to stay united. Have a Great day,Hilary.
Dan and Deanna "Marketing Unscrambled"

Hi Pete .. sorry about the video .. perhaps there's a dot com version? Not sure ..

The pageantry now is just that .. but contains the history of those organisations - so the ceremonial displays are a record of the necessities of the past.

Thanks for your comments ..
Hilary Melton-Butcher
Positive Letters

Hi Deanna and Dan .. thanks for appreciating the celebration. There's a growing trend to get rid of the Monarchy and hence the pageantry .. personally I think it'd be a great pity.